It’s no secret that we here at The Brothers Brick love this year’s LEGO Agents sets — especially Andrew, who won’t shut up about them!

So we’re very pleased to bring you an interview with Matthew Ashton, Creative Director for LEGO Playthemes, and one of the set designers for the LEGO Agents theme.

(UPDATE: As I link to this in 2014, this interview is more than six years old. Sorry about the broken images. The interview is still very much worth a read.)

The Brothers Brick: To start out, please tell us who you are and a bit about yourself.

Matt Ashton: My name is Matt Ashton, I’m 32 years old (probably 33 by the time this goes to print), I’m originally from the UK and have worked for LEGO for the past 8 years. I studied as a Fashion Designer in Brighton, on the south coast of England, but always secretly had a burning desire to become a toy designer. (I’m an avid toy collector and have a house full of Star Wars figures, Transformers, Barbies, Bratz and hundreds of My Little Ponies! (!?!?! Yes I Know!?!?!)

When I graduated from Uni, we had an exhibition in London showcasing our designs, where I displayed minature replicas of my Cat Walk Collection on Barbie dolls … some LEGO Talent Scouts were at the event looking for stylists to work on Clikits. They spotted me, asked me to an interview and after quite a lengthly process I got the job. Years later I became Creative Director and moved into Playthemes, were I now oversee the IPs [intellectual properties -ed.], Star Wars, Indie, SpongeBob etc. as well as our home-grown playthemes lines like Castle, Aqua Raiders, Space themes and Agents.

TBB: What were some sources of inspiration for the theme?

Matt: We looked into anything spy, agent, super hero or super villain related! TV shows, cartoons and movies from when we were kids, right up to present day. We looked at everything from Mission Impossible to Thunderbirds.

TBB: Was the gold-jawed bad guy inspired by “Jaws” from the Roger Moore Bond films?

Matt: Possibly! :-) A lot of our characters pay homage or are twisted references to classic, iconic spy characters…. something that a lot of dads will get, but kids will just see as really cool, new baddies!

TBB: Why cyborgs for the bad guys?

Matt: We just wanted to give the theme a real twist, an element of fantasy, something a bit quirky that would lighten the tone of the whole theme.

Plus from a kid’s perspective, the fantasy characters are just so much more appealing and really help to inspire different stories when they are playing. A guy with robotic spider legs is so much cooler than just some boring guy in a suit….he can climb up walls and find different ways to attack or escape. A baddie with a chainsaw arm can cut through walls and break into bank vaults.

It really helped us give each character a different personality and a different purpose, making them more desirable and collectible.

TBB: What was the reason to use hose nozzle pieces for the guns as opposed to other LEGO gun pieces?

Matt: It was a company decision not to replicate realistic firearms in this theme, to balance the tonality of the theme, without pushing things too far.

TBB: Was there anything you really wanted to include (element, minifig, whatever) in the sets that was denied? 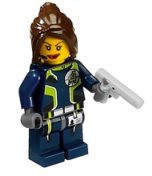 Matt: Not really. Of course, we always want to squeeze as much stuff in there as we can and we always have to prioritize what is most important. I think we did a really good job at getting in the essentials, to create cool models and good play value. We introduced several new elements to strengthen the theme and create new characters — laptop computers, barbed wire, robotic arms, new jaw-Helmet for Break Jaw and two new wigs for Dr. Inferno and the delightful Agent Trace….possibly the hottest girl Minifig ever!

TBB: Indeed. The barbed wire is awesome. Whose idea was that?

Matt: The team came up with it; it just helps make the Missions seem a little more difficult and dangerous. The Agents can’t just hop over a fence — they have to be super careful when they are sneaking in to a baddie’s lair!

TBB: Was there any thought of making the barbed wire interlockable, to more accurately replicate it?

Matt: Yes there was. We looked into different options, but went for this one, mainly due to manufacturing and packing issues. When designing new elements there are so many issues that we have to be aware of including safety standards, cost, manufacturing, packing, supply (the amount of time it takes to mould each item) and of course the compatibility with other LEGO elements.

The other versions we looked into would have caused too many problems from a supply and packing standpoint, as they become easily tangled up during production, really slowing the packing of the boxes and requiring the element to be manually packed which also adds a lot of cost. We had a similar issue with the flail in Castle which is why it was remolded straighter.

We feel that the execution we went for solved these issues but at the same time visually gives a good replication of barbed wire and is easy for the kids to handle and build with.

Was it hard to get approval for the first ever, new minifig arm mold?

Matt: Kinda…. the LEGO minifigure is protected by a series of patents, to prevent competitor companies making copies of them. This does however mean that we are limited ourselves with what we can and can’t do to the minifigure, without infringing on our own rights.

To get the new arm through, we had to go through a series of meetings with our legal department to check into all of this and get their approval, which they gave us….Yeah!

TBB: Was there a mandate from the company to include a lockup/prison detail in the series? Everyone knows LEGO loves a good lockup kit.

TBB: Are we likely to see more metallic parts in future products?

Matt: Hopefully…. I love them! It’s all about the bling with me! (As well as new hairdos for minfigs….think it’s my background in fashion or something!)

TBB: Do any of the Agents have a 00 designation, a license to kill?

Matt: Of course not….LEGO Agents have a license to apprehend! :-) All LEGO Agents have been through intense, strict training — equipping them with the skills, abilities and know-how to track down, apprehend and imprison the world’s most dangerous Super Villans. LEGO Agents’ firearms are only ever to be used in situations to disable villians’ vehicles to prevent their getaway, by shooting tires etc. or for forcing entry into bad guys’ hide-outs, to put a stop to criminal activity.

TBB: Is there anything else that you think people would really want to know about this theme?

Matt: Erm…if there is any more on they way? Which the answer to that is wait and see!

Also, I have been asked a lot recently if there is an overall story arc for the Agents theme… i.e a master plan for Dr. Inferno to take over the world etc. To which the answer is ….no.

When we tested Agents we found, with this theme in particular, it actually worked best not to do so. We designed the products as a series of mini missions, like “steal the Diamond back”, “retrieve the Treasure Map”, “rescue an Agent”, to act as little story starters for the kids, who can then tie them together to create their own master plans. During testing kids were like, “OMG that’s so cool, the diamond in the little set is like a special power source, the bad guys need to get hold of it, to put it inside the Laser Cannon in the Volcano to make it even more powerful!” etc, etc.

TBB: Which set is your favorite? Why?

Matt: That’s soooo difficult as I really like a lot of them, the Command Centre Truck

is awesome, as it’s jam-packed full of so many cool little vehicle and gadgets and the briefing projector is sweet!

I really love the Volcano

too, mainly due to its comedy, campness…. I wanna live there!!!! and Claw-Dette is soooo my favorite character! I like the speed boat one too, it’s all about the Laser Sharks, that can now swallow a minifig whole — if you put his arms up first that is!

TBB: What was the most enjoyable moment you had, as you designed these sets?

Matt: I was really involved with the character development and that was so much fun, especially doing the baddies! The more ridiculous we could make them the better.

I think for a while LEGO products have been getting a bit too serious and I really wanted to bring some tongue-in-cheek humor into these sets and I was determined to do that through the baddies. Also coming up with their names was a lot of fun, although most of our first choices didn’t get through, either because they weren’t approved by the legal department for different reasons, or they were just too silly or risky… but we had a good laugh anyway though!

TBB: Thanks so much to Matt for agreeing to do this interview with us, and to LEGO Community Team member Steve Witt for helping us make this happen.