If you’ve been following the series of posts where we’re analyzing LEGO models as communication, chances are you’ve not quite agreed with me – perhaps you don’t recognize your own building style in what I write. That’s to be expected. But today I’m going to show you that regardless if you follow the model I’ve been building up or not (which you most likely don’t), your MOCs can be analyzed with it, which is what the model is meant to do.

The very talented Ralph Savelsberg (who is no stranger to TBB) left the following comment on Tuesday’s case study:

Interesting. I’ve been following these posts for a few weeks now and have thought about a few things. I’m not sure how much of this is applicable to the way I go about building.

I don’t fiddle around with pieces not knowing what to make with them in advance. I may look at a particular new piece and recognise it as something that I can use for one of the many projects that I always have in mind.

I don’t know what message I try to convey with my MOCs. I don’t think I am normally addressing anybody in particular with any of them, except when I build something with a public display in mind or for a competition. I’m mainly enjoying myself. I’ve been building with LEGO since the time I first could put two bricks together and I don’t go about building any differently now that I happen to share pictures of my models with the rest of the world, although I of course do enjoy it when people like my models and incorporate people’s suggestions.

I’m not sure whether it was Peter Gabriel who said that he makes the music that he likes and if other people happen to like it too, that’s a bonus.

Based on this comment, what I know of you and your models and through your interview on Gizmodo, I’d like to try to place your building in the model I’ve been describing. You actually follow it quite clearly – and even pointed it out in your interview quite well. I hope you don’t mind, Ralph. I greatly admire you as a builder.

To refresh our memories: Ralph is most known as a master at building real-world aircraft with great detail. Here’s part of his collection: 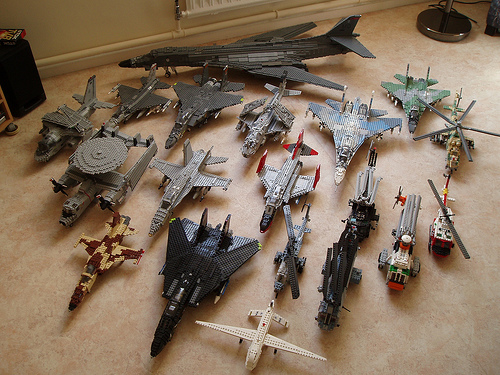 Here’s what I’ve been saying we all do:

And that’s the story so far – at least until next week when we’ll look at presentation. More on that on Monday.

By using the model we can get a basic picture of why you built your crafts the way you did. And by using this analysis on one’s own model we can see flaws with a build-in-progress. We all do this. The thing is that most of us do it without knowing so. Our mind is beautiful in the sense that once you put words on an abstract concept it’s easier to think about that concept.