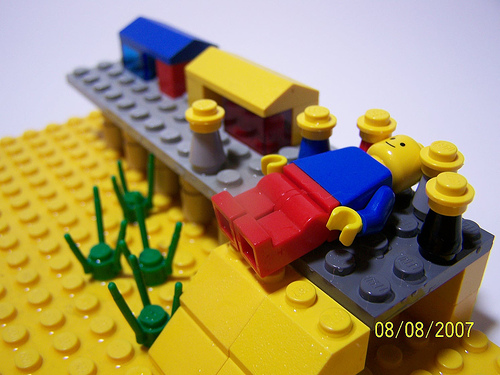 The mysterious, gigantic minifig on a beach in The Netherlands has left TBB readers all abuzz. Builder Will M. has recreated this intriguing scene, in microscale no less!

Giant Lego man found in Dutch sea
AMSTERDAM (Reuters) – A giant, smiling Lego man was fished out of the sea in the Dutch resort of Zandvoort on Tuesday.

Workers at a drinks stall rescued the 2.5-metre (8-foot) tall model with a yellow head and blue torso.

“We saw something bobbing about in the sea and we decided to take it out of the water,” said a stall worker. “It was a life-sized Lego toy.”

A woman nearby added: “I saw the Lego toy floating towards the beach from the direction of England.”

The toy was later placed in front of the drinks stall.

Excellent work, Will! You had me laughing so hard I could barely blog this.

4 comments on “Will M. recreates the mystery of the Dutch minifig, in microscale!”