Seems our very own Linus is feeling either shy or modest, so I’ll go ahead and post this for him. ;-) Here’s his “Yellow Devil”: 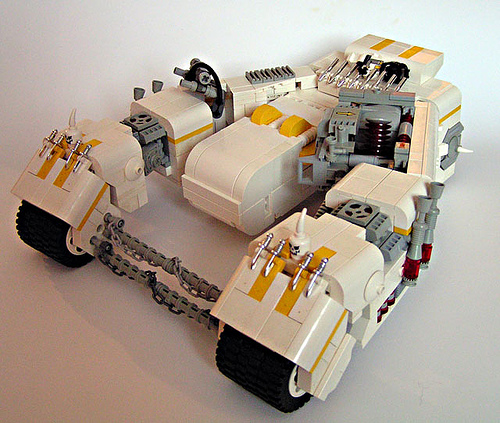 Here’s what he has to say about his latest creation:

Rob Kraataclaw is a legend in the Interstellar Snuff Circuit. Rob was once a human, but when he tried to enhance himself with super-strength implants he went insane. Believing himself to be part of an ancient tribe that never even existed – the Kraataclaws – he cut off his left arm and replaced it with a giant, well, claw. Now all he wants to do is to eradicate all Pure Humans(TM).

The Yellow Devil is part of the ISC, as Rob believes the prize money will help him reach his goal. The contestants are dropped down on a planet and given a physical point on the planet. Goal: get there as fast as possible, on land. Other rules unexistant.

For some mysterious reason the space ninjas has taken an interest in Rob. Could be that he is flaunting a mutilated space ninja corpse on his wagon of doom.

You can see more pictures on either MOCPages or Brickshelf.

2 comments on “C’mon Linus, it’s okay to blog your own stuff!”