Once you let it slip that you build stuff with “Legos,” the floodgates open for “Oh, oh, can you make a minifig of me?” So I finally broke down and did so. The resulting minifigs were all pretty boring, so I made alternate versions that give each person a little more personality.

First up, Joe, who’s always annoyed about something, and likes Audis:

Next, Melissa, who’s a contractor and is therefore my henchman (as opposed to a minion; thus the Oddjob outfit):

Pete, whose Greek heritage is a point of pride (of course, Pete’s family comes from a mountain village, not an island — something much harder to represent in a LEGO minifig):

Paul has a podcast (RSS), in which he plays really cool music and interacts with a mechanical entity named Weasel_bot: 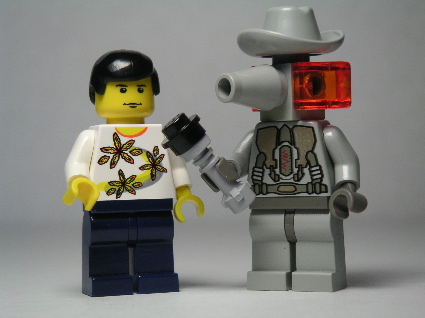 (Paul gets a full-size picture only because both of his figs appear in the same pic; everybody else is like Superman and Clark Kent — they can’t both be in the same picture at the same time.)

Finally, just when you thought you couldn’t look at any more minifigs of my coworkers, BAM!!! NINJAS! Here’s Sky as himself, and as a totally awesome ninja: