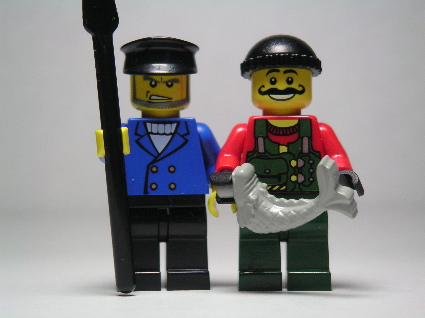 Names: Bartholemew O’Hurlahey and Mario Fratelli
Occupation: Captain and first mate of the fishing vessel Pequod II
Notes: Capt. Bart fancies himself the long-lost descendent of Herman Melville’s Capt. Ahab. He insists on carrying around a harpoon, even though they mainly catch herring, with a little cod and pollack thrown in. He also affects a limp, despite being in peak physical condition. Whenever he spots another boat on the horizon, he screams at Mario that it’s “the white whale!!!” and forces him to haul in the empty nets and give chase. Mario just sighs and rolls his eyes, muttering under his breath that Huckleberry Finn is a better candidate for canonization as the Great American Novel anyway… Sometimes when Mario is drunk, he gets angry at Capt. Bart and reminds him that Capt. Ahab is “fictional, you crazy coot!” He then breaks down sobbing that he misses his long-lost brother, who dresses in green instead of red.

2 comments on “The Crew of the Pequod II”