I debated whether to post my latest minifigure over on my minifig-themed blog, but it does require a bit of explanation, so I’ll post it here instead. 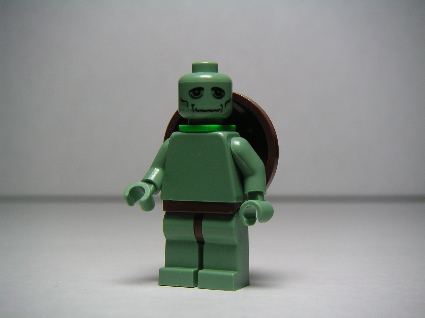 Kappa are mythical water imps from Japan. Kappa inhabit lakes, ponds, streams, and other bodies of water. If you do a little research, you’ll find that kappa are associated with some pretty nasty legends. For example, they drag people into the water and eat them.

Their favorite food is cucumbers, which is apparently why cucumber rolls are called “kappa maki.” Long ago, parents would sometimes carve their child’s name into a cucumber and toss the vegetable into water in an attempt to prevent kappa from stealing the child. Generally, though, kappa are considered mischievous creatures today. Here’s a more contemporary, “cutified” kappa: