Have you ever been to a convention and you forgot or needed a piece? It happens to all of us, and in June it happened to Mark Larson. He realized that you could probably get any piece you needed at a convention, if you had something worth trading for it. That’s when he remembered the story about the Red Paper Clip Game and thought it would be cruel to make me play it.

Giving me a modest 2×4 red brick, he set me out on an adventure… 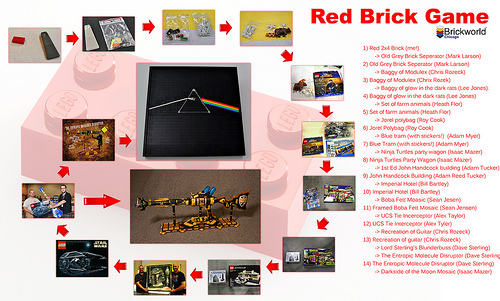 With my little brick in hand, I basically went up to every single person still in the convention hall pleading to trade for something – anything – to keep the game moving. For those that were there late Saturday night you would have been treated to a sales pitch that would rival most telemarketers.

Originally the plan was to see what I could get by end of night and trade it for some food or refreshments, or if it was really neat I’d just keep it. But after finding my sales pitch lacking that emotional connection I decided I needed to a new end game:

Whatever I had at the end of the convention would be donated to the Esther Walner Memorial Charity Auction at BW2014. 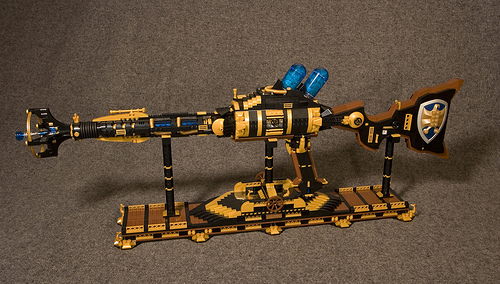 This changed everything. It went from amusement of my futility by the attendees to a communal effort to see what we could trade up to. People suddenly was far more generous – often trading items orders of magnitude more valuable, people started making suggestions on who I needed to ask and talk to, people offered money and pure donations to the pot (though that would be against the rules) and it became a bit of an event where people would routinely check in to see what I had traded up to.

I’m often surprised by the generosity in the community, and you would think I would have grown to expect such things, but I was not prepared for when people were trading their MOCs, or would trade a brand new UCS set that they had just bought at auction. Sure it was always a hope that I could get something valuable to auction, but this was was crazy!

In the final trading stages I had to choose pieces that would (I hope) sell well, not to mention be something that people could feasibly take home.
And after 14 trades I got not one, but two, fantastic MOCs for this year’s auction. 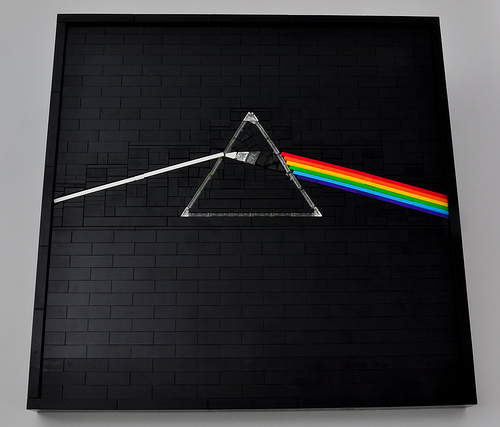 Auction Item #2 Isaac Mazer’s Dark Side of the Moon

So bring your pennies to Brickworld Chicago, you’ll need them if you want to outbid me.