G. K. Chesterton was a prolific English man of letters from the early 20th century, writing countless articles, editorials, letters, non-fiction books, short stories, novels, and even epic poems. One of his most beloved and recognizable characters is the crime-solving priest, Father Brown. Father Brown could rival the more famous Sherlock Holmes in his ability to unravel any mystery by using his powers of observation and deduction. Brought to life in LEGO form by prolific Finnish man of bricks Eero Okkonen, this Father Brown is modeled after the character as played by Mark Williams on the BBC show. The eyes are hidden behind round glasses, and the shoulders are slightly hunched over. The black cassock, the clerical garb worn by the priest in his exploits, is well done, even including a slight bulge for the rounded belly that the unassuming Father Brown had acquired over the years. 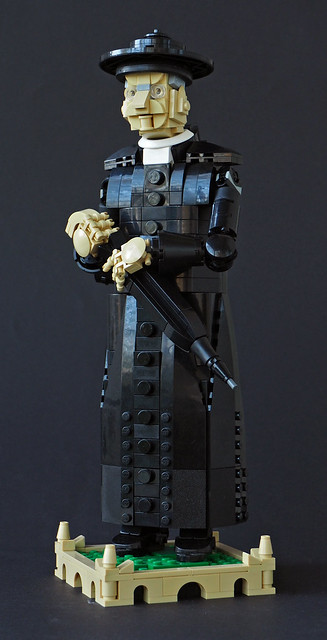 A round wheel well in white makes for a lovely clerical collar, and a tire holds on the hat, allowing for a more natural angle. A Technic connector allows a subtle curve for the chin. The studs on the cassock were inevitable, as covering them would have ruined the otherwise flowing lines of the fabric, and they don’t detract from the final appearance. To distinguish between the studs and the buttons, 1×1 round tiles have been used. The base adds a nice touch, with a small splash of color against all the black, with the vaguely gothic architecture recalling the English countryside where the priest did most of his sleuthing. My favorite detail, however, is the umbrella that the crime-solving cleric carried everywhere he went.