This week’s builder is a crony of mine going back to 2007 where I met him in a smoke-filled hotel room in Seattle, on the first night of BrickCon. I can’t quite recall everything that happened that night, or the rest of the weekend, but we ended up with matching tattoos and invitations from Seattle’s court system to come back in a few weeks for another visit. You probably know Andrew Lee from his kick-ass models posted on Flickr and his many appearances on TBB, either as a solo act or with his band RoninLUG. Part of what drew me to Andrew online and was later reinforced in person was his irreverence and cutting sense of humor. If you’re throwing an AFOL party, you need Andrew Lee on the list. I sat down with Andrew for some carne asada at his beachfront apartment in Los Angeles, California. We talked about Burning Chrome, Oakenfold vs. Tiesto and CR-Z meets. We also talked about LEGO.

The Brothers Brick is a blog by and for adult fans of LEGO. Occasionally, the people we interview talk about adult beverages and use adult language. This is one such case.-ed.

KG: Many builders have OCD when it comes to their collections. Do you have any of these traits, and what traits have you seen in others? 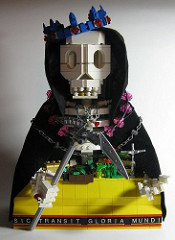 AL: I personally believe OCD like many mental illnesses is present in all people but in varying degrees. AFOLs just tend to have it manifest in a much more visible fashion. I definitely suffer from a mild to severe case of OCD – depending on how you look at it. My collection for the most part is fully sorted by part and/or color. For me it’s an efficiency thing. Builds go quicker starting from a sorted collection and I’m able to store more bricks if they’re sorted. I tend to recycle my builds quickly and keeping everything in order helps that process as well.

I’ve seen the whole spectrum of OCD in other builders. I know people who keep their new and old grays separate (a mild case) and I know people who have museum like displays of every part ever made (an extreme case).

KG: How did you build your collection? Did you have a strategy in mind and do you ever feel like you have too much LEGO? Have you ever had any weird interactions with people in the LEGO section of your local store?

AL: I, like many others, have built my collection in an organic fashion. Sets from my childhood are mixed in with pick-a-brick purchases, cracklink orders, retail deals, LUGbulk scores, comfort purchases, and secret supplier hook-ups. From a macro perspective there’s very little strategy for growth. I tend to buy parts for whatever current project I’ve got going on or am wooed by the latest additions to the parts palette. You can never have too much Lego if it’s properly managed. The tell-tale sign of having too much Lego is if it’s easier to buy a new set for a part you already own. I’m looking at you DanR. 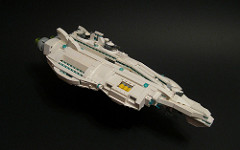 I try to not interact with people in retail stores period. I did however almost have a throw down with a weird collector dude over a Ninja Turtle action figure once but that’s another story . . .

KG: Do you ever build in an altered state? We both enjoy a good bowl of soup from time to time, do you think it enhances the building experience, and if so, how? 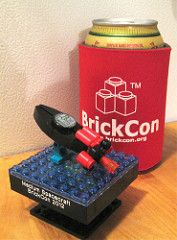 AL: I build all the time in an altered state.

Caffeine, alcohol, and loud music are all frequent contributors to my building process. I really don’t think you can quantify the risks or rewards of building in different mind states except through personal experience.

That being said I notice that I am more creative and free with the bricks when I’m chilled out.

As for soup I’d recommend going with the chicken tortilla with a healthy dose of fresh cilantro to get that mojo brewing.

KG: You are a founding member of RoninLUG. How did this LUG come to exist, describe its membership, and how does it differ from traditional LUGs. What happened with the famous “stickering incident” in SF?

AL: RoninLUG came to exist because of a common love of mecha, samurai, and cold beer. The core founding members are myself, Paul Meissner, and Fradel Gonzales who years ago started kicking it at each other’s pads and messing around with each other’s bricks. One fateful night fueled by cheap beer and cheap Exo-Force sets we formalized RoninLUG as the name of our informal brotherhood. Paul and Fradel even lived in the same place for a period of time which became the default headquarters — imagine the Ninja Turtles’ sewer lair with slightly less pizza and a ton of Lego.

We differ from traditional LUGs in that we just do our own thing. There are no official meetings, no formal organization, and definitely no rules. Our membership has grown rapidly and organically since those early days but everyone involved gets the common vibe. It’s a special thing to be a Ronin.

Ah the “stickering incident of 2010” — well, let’s just say some of our younger members got a little overzealous with expanding our epic cyber city layout. It didn’t help that they stickered some crotchety train dude’s MOC with a Shepard Fairey sticker who then proceeded to throw a huge tantrum. To be honest I wasn’t even really involved in the incident itself or the resolution — I think I was out in the parking lot with a bunch of hooligans at the time. 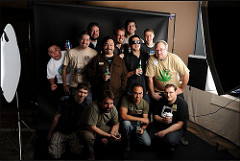