Part of a larger LEGO concept by the builder, this model of the docks at Fort Stockton, Wullham features some lovely architecture, delightful parts usage, and realistic rock formations. Flickr Builder Evancelt enjoys historical era models full of red jackets and muskets set against natural scenery with old buildings. Here they used some simplistic parts as crenellations and molding along the top of the fort, while cleverly employing letters with a red seal as diamond-leaded windows. Well-molded sea grasses and foliage compliment the sharp change to rock as we move down to the dock. Basalt formations are a delightful bit of geology that we don’t see enough of in LEGO builds or real life. Using dark grey at the base to illustrate the spray and waves of the sea on the rocks is a great decision that adds to the realism of the build. 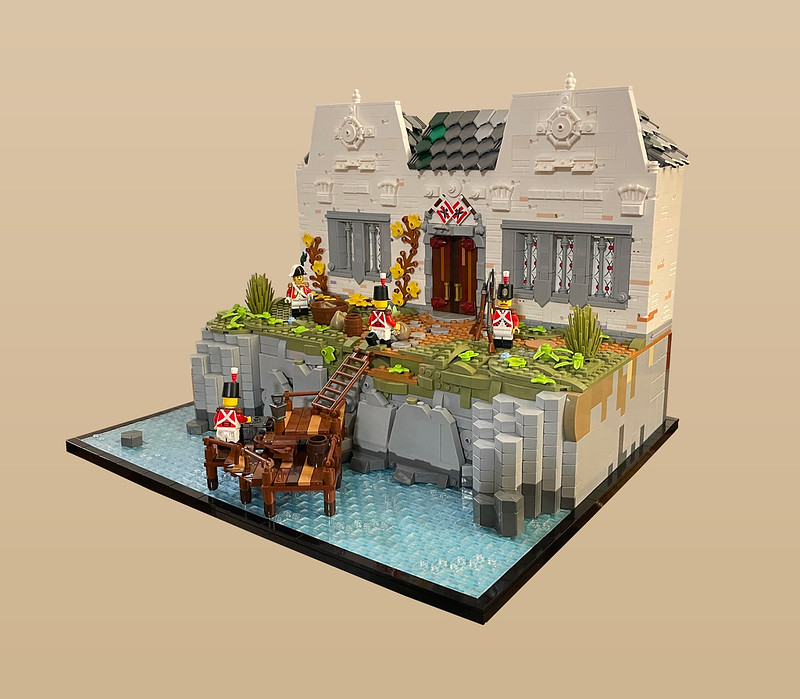 Of course, the multilayered dock is also wonderfully detailed. Multiple shades of brown make up the boards, while reddish brown and dark brown in the supports mirror the water effect used on the rocks. The lamp piece is a good period setting element that matches well with the flat-topped chest. I love seeing historical models that aren’t focused on war. Sure, these are soldiers at a Fort but still, this is more about daily life than about a battle and I’m all about that. Not to mention how soothingly executed that blue sea is on the eyes. Well done, Evancelt, well done.