The first trailer for Spider-Man: No Way Home made it pretty clear that Sony and Marvel are looking to double-down on the multiverse-hopping success of Into the Spider-Verse. Thanks to a spell cast by Dr. Strange, Tom Holland’s Peter Parker will be facing off against foes from previous Spider-Man film eras, including Alfred Molina’s Doc Ock from 2004’s Spider-Man 2. And if the villains from these different movies can show up in the MCU, you have to wonder, “Who else might be along for the ride?” It seems the worst kept secret in history is that this film will feature Tom Holland joined by Tobey Maguire and Andrew Garfield, each reprising their own version of the Web-slinger, for three times the wall-crawling action. Of course, that’s not confirmed. It might just be speculation. It could be that the internet rumor mill has gone haywire and is setting legions of Spider-Fans up for disappointment when Tom Holland is left to fight these villains all by his lonesome. If that’s the case, Ben Cossy has us covered with this delightful diorama that imagines what it might be like if all three Spider-Men went up against a Sinister Six composed of Electro, Mysterio, Green Goblin, Doctor Octopus, Kraven the Hunter, and Sandman. 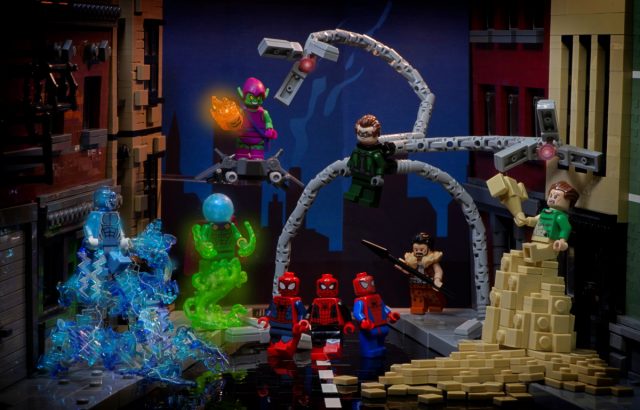 I have to say, Kraven’s an interesting choice to round out the villain roster. He’s the one character in the line-up who hasn’t appeared in a live-action film as yet. Which doesn’t mean we won’t see him. But who would you cast?

1 comment on “This Spider-Man scene features some pretty massive spoilers…maybe.”