LEGO has been using a combination of stickers and printed elements since the 1970s for decorating elements. While there’s a variety of reasons from the cost to play experience, there’s one aspect that’s less obvious and it goes down to manufacturing and storage warehousing considerations. 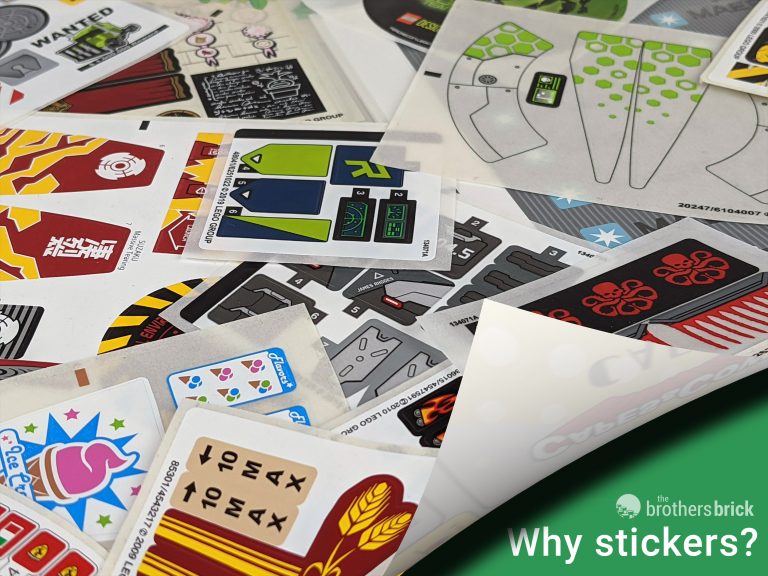 In a recent Reddit AMA (Ask Me Anything), LEGO Designer Mark John Stafford explains in a simplified manner for us to appreciate the details behind the reasons why stickers instead of printed elements.

“The limiting factor, isn’t pure finance, it’s is the same one you have at home. Space. After a while you run out of places to put your LEGO.

Think of each factory having a limited amount of space (I won’t go into why it’s limited, read ‘Brick by Brick‘ by David C. Robertson if you want to know what happens when LEGO didn’t have limits).

Every brick made, in each colour has to go into it’s own box. This box needs to be stored until it’s ready to be packed into the bags in the retail boxes you buy.

So there are thousands of boxes. Each year some bricks stop being made and this leaves empty boxes we can fill with new bricks (or new colours of bricks at least). So each team of Designers is given a number of boxes it has the chance to fill.

But consider, if we don’t print the legs then, after four non-printed legs we have saved four boxes and this means we could make a whole extra set of legs. This might mean we have a whole new character we can make.

Or alternatively the set designer can change the colour of a brick to fill that single saved ‘box’ in the factory, or print an element.

A lot of people wish we printed every part we sticker, but consider this in terms of ‘boxes’ A sticker sheet is one box, but each printed part is the box without the print, and another box after it is printed. It could take dozens of boxes to replace a single sticker sheet box.

Of course this is hugely simplified, there is also a limit to how many molding machines there are and how much time we can use to change the molds in these machines and a million other tiny issues which I’m glad I don’t have to deal with, that limit the number of ‘boxes’ available.

I hope that makes sense, I’m pretty sure I heard our old Vice President explain it a bit like this at a fan event once, so I hope it does.”

Manufacturing and Storage warehousing complexity – an insight into space management

LEGO runs a complex set of processes with a high level of accuracy to ensure that parts are managed and readily available when assembling pieces into bags for packaging. The amount of manufacturing know-how and level of execution is part of how LEGO maintains its competitive edge in providing a high level of user satisfaction. Part of managing efficiency and maintaining costs is about the reuse of elements, thus individual printed parts that are not going to be used often will affect many processes down the productisation and packaging. LEGO can never fully predict the demand of a set to a high level of accuracy which will all affect the bottlenecks of the supply chain. 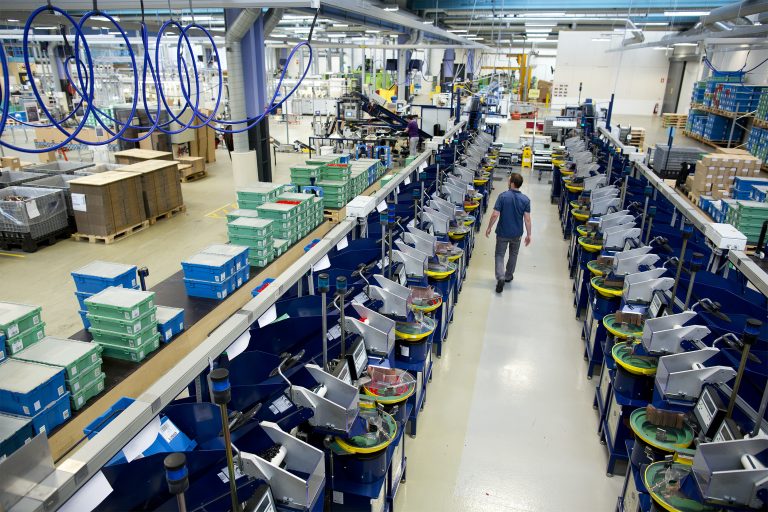 The parts are stored in what LEGO calls “P boxes” (Plastic boxes) depicted in the infographic imagery and shown below. They all have barcodes affixed for machine identification. 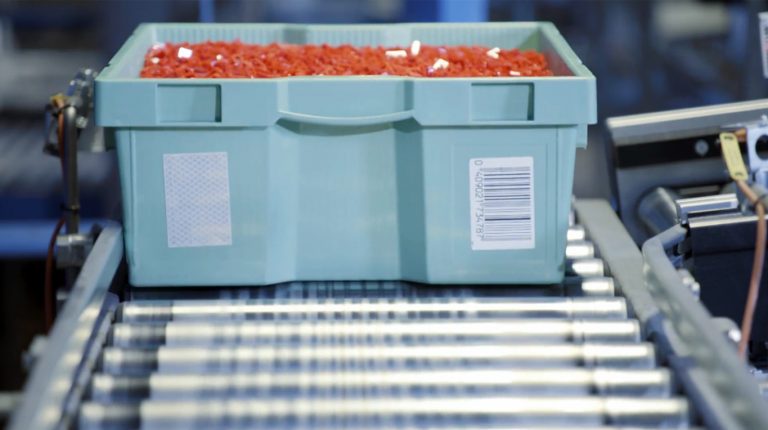 According to Niels Duedahl, then LEGO Vice President of Manufacturing (2005-2009) “That warehouse and those P boxes are fundamental to our control – every P box has a unique bar code and nobody knows what is inside the box except the SAP and our in-house management system.” 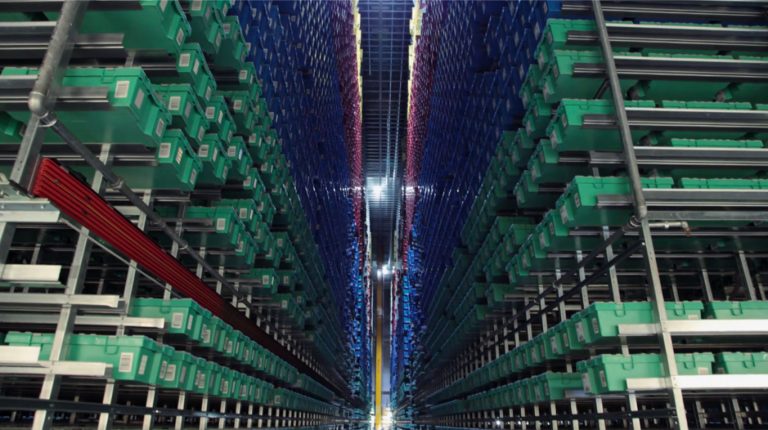 Stickers will always be here to stay

From a child’s viewpoint, stickers are fun. Every kid at some point in time will go through a sticker phase. While adult LEGO fans will almost never appreciate stickers on our builds, LEGO has to manage parts carefully to restrict parts that only have a single-use. With the finite space and costs associated we’re pretty sure stickers will always be a part of LEGO sets. 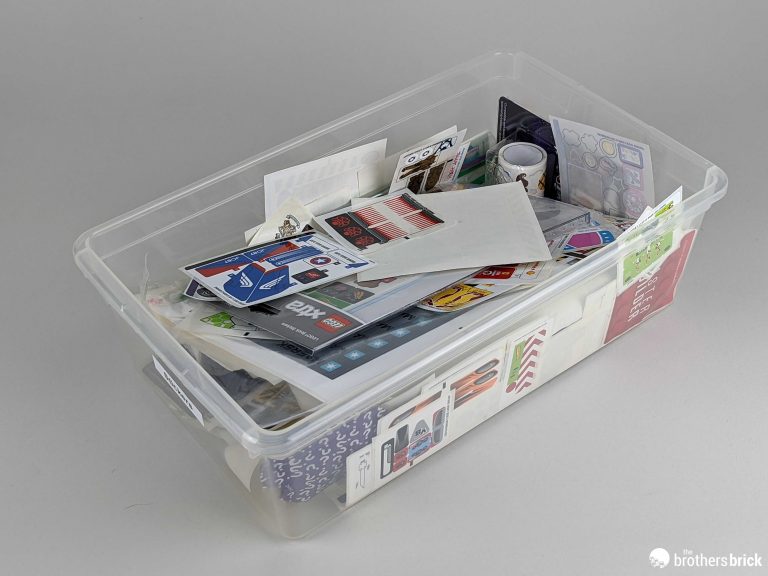 If your set arrived with missing or damaged stickers, LEGO has a replacement service that you can now make formal requests. Use the Missing Bricks service on Bricks & Pieces. LEGO has even mentioned that if your sets from older stickers are coming loose, they’d be happy to send replacements if there are any on hand. Obviously, these are going to be a hit and miss for sets that go back decades. In recent updates, we’ve seen the LEGO website include sticker images for a quicker search for recent sets. 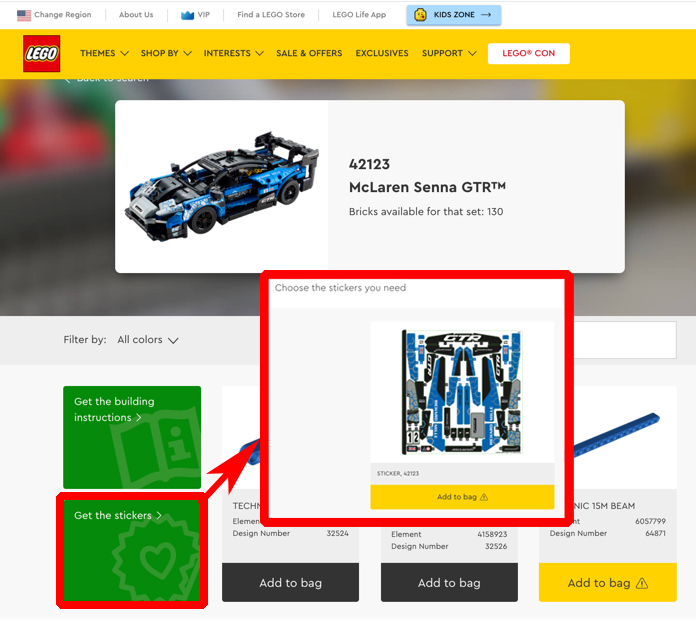 What do you think of stickers? Do your kids enjoy them? How much do you despise them? What do you do with your stickers? Let us know in the comments.