LEGO 10292 Creator Expert Friends: The Apartments was revealed on May 11th, released for VIPs on May 19th, and worldwide on June 1st. With over 2,000 pieces and 7 minifigures, the set has many Easter eggs that reference various episodes from various seasons. 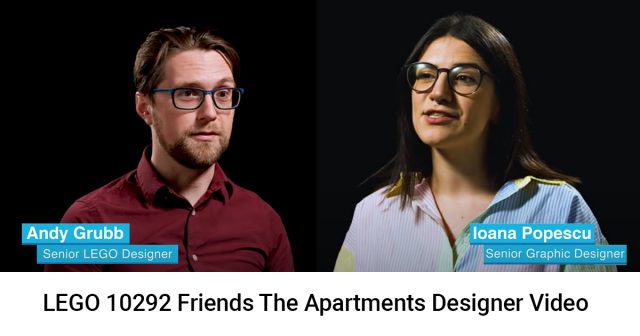 Andy Grubb, a Senior Designer at LEGO, and Ioana Popescu, a Senior Graphic Designer, talk about how both the set and the minifigures were designed. There are many references to the classic moments of the show, and some of them have been LEGO-fied. Andy mentions the response to the first set, LEGO Ideas 21319 Friends Central Perk, was so overwhelming that they wanted to give the fans something bigger and better.

The original designer of the Central Perk set made the first concept design for the set. However, the LEGO Group did go to Warner Bros to get the original plans for the apartments. Since both the apartments changed so much throughout the seasons, they had to go back and double and triple check every little detail to get them right.

The set includes all six friends with different outfits and Janice as the seventh minifigure. Ioana says “The minifigures from this set are not based on one specific season. We were just trying to find the most iconic outfits from throughout the seasons.”