My birthday falls in May and this year was particularly special thanks to my good friend Michael, who asked me what I wanted for my birthday. We’ve taken to crafting each other’s gifts lately and he recently started building BrickHeadz as Capn Brickard on Instagram. With this in mind, I thought it would be awesome to have BrickHeadz for one of my favorite science fiction series, Stargate: SG-1. He gladly accepted the task and I eagerly awaited the results. So, in addition to becoming a contributor for The Brothers Brick in May, I was gifted these designs that I immediately wanted to share with TBB’s readers! Since they’re particularly special to me and I know the builder personally and could get some behind-the-scenes info, I want to go into a little more detail than our typical articles. Plus I want to geek out about Stargate a little, if you’ll indulge me. 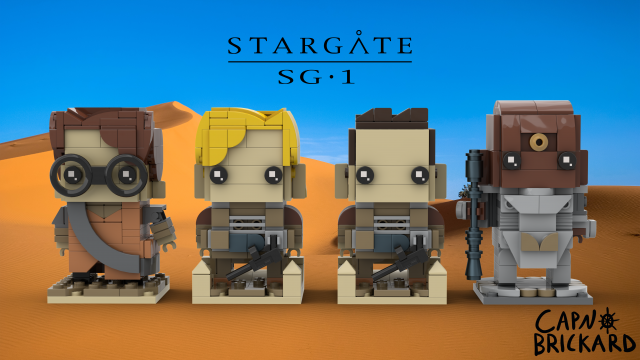 Capn Brickard decided to model these after the characters’ costumes in the first episode, “Children of the Gods.” Doctor Daniel Jackson, below, is dressed in the robes of an Abydosian, as he was at the end of the movie as well. Michael captures this with the cut of the garb near his feet and by using the macaroni tile as the strap for his satchel. The use of a hinge brick for the shoulder was a smart move to make room for his bag! His clever use of plates and tiles in the hair matches Daniel’s classic disheveled look perfectly as well! 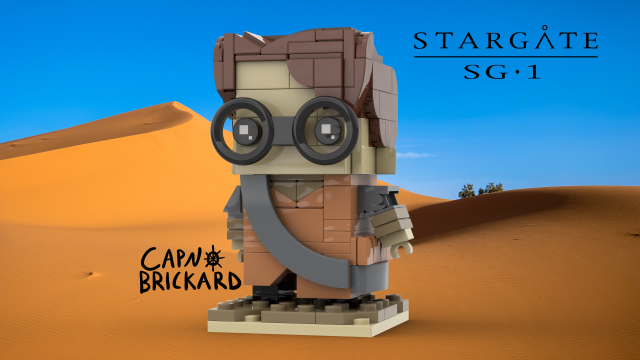 Next is Dr. Samantha Carter, a captain in the Air Force, astrophysicist, engineer, and pilot who had apparently been working with the Stargate program for two years prior to the last mission to Abydos. She shares the same body design as Colonel Jack O’Neill. For those that don’t know, he was the guy with a tragic backstory, played by Kurt Russell, in charge of the movie’s mission to Abydos. The models’ bodies are based on the military fatigues they wear to the desert planet and clearly, they are armed; a knife attached to their belts on the back of the models. Best to be prepared on an alien world, I guess? The hair is what really sets these apart, and again, Michael does a good job of capturing the characters’ distinctive looks. Michael says that he had a challenge with Jack due to the restricted amount of parts in dark brown and that he had to redo Sam’s hair a few times because it looked too similar to Daniel’s. 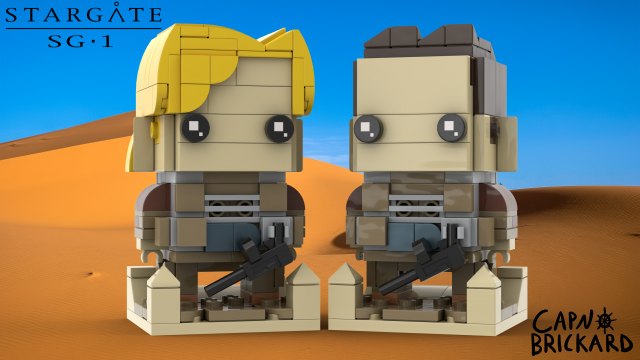 Finally, we come to Teal’c. My favorite character in the series, his honest and straightforward persona is something I aspire to channel. Formally the lead military officer of the big, bad Goa’uld, Apophis, Teal’c helps Sam, Daniel, and Jack escape before joining Stargate command and SG-1. Here, Michael chose to model his Jaffa Armor and it is fantastic! 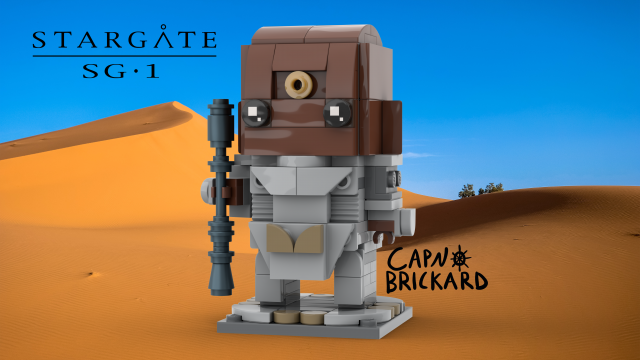 This one is definitely my favorite build of all four. Clearly different from the others, Michael was a bit sneaky while working on this one. Wanting to get Teal’c’s head shape right without letting me know what he was really working on, he made a BrickHeadz of Imhotep (also a bald character) and asked for my opinion about its shaping. I thought it was a bit clever when he told me about it but he was even sneakier because he then also surprised me with built versions of Teal’c and Daniel. I was elated!

The brand on his forehead, a mark of his servitude to the false-god, Apophis, took Michael a few attempts before he was happy with the design. He told me that the armor took him some time to figure out. There are a lot of pieces available in light and dark blue-grey but the layering of his armor was what proved most difficult. The angles of the pieces used, plus the textures he employs, perfectly capture Teal’c’s armor within the limited form of the BrickHeadz style. Like Daniel, Michael used a hinge brick so that Teal’c could hold his staff weapon. I love this little detail and couldn’t thank my friend enough for these awesome gifts. The different bases for each of them are also worth applauding as well!

Just a bit of context for the series that I think is important to note: Stargate the motion picture came out in 1994 amid tons of alien invasion-themed media. Lots of invading spaceships and creepy-looking aliens with stories focused on how they wanted us all dead or to take over our planet. It’s a common theme that we still see today but Stargate has always been a bit smart about it.

I’ll be honest, I’m not comfortable with robbing ancient civilizations of ingenuity by claiming aliens were responsible for their scientific advancements, especially via enslavement. Stargate: SG-1 falls heavily in this by appropriating a lot of lore from cultures of the past and explaining it in the context of alien species like the Goa’uld or the Asgardians. Michael even adds a disclaimer to his posts to help bring awareness to the issue. However, in the fight to free those subjugated by the Goa’uld, the writers of SG-1 tried to restore and exemplify the agency of humans within the galaxy. I talked to Michael about it and his take is that “The show tries to lean into the adaptability and resilience of the human species. I mean, humans are responsible for thwarting most of the Goa’uld’s plans for galactic domination.”

Though they handle a difficult concept and certainly toe the line at times, the Stargate franchise asserts that humans can definitely hold their own in galactic civilizations. The SG-1 team is full of people that have struggled and Michael does well to capture their formative experience together.

Be sure to check out some other fans’ amazing LEGO Stargate-themed models too!