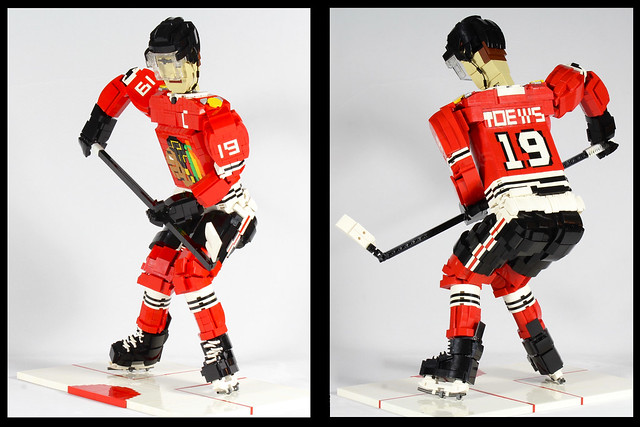 Starting from the ice up, Kaleta uses sideways building to capture the smooth surface and the rink markings. The large round dot and right-angled lines represent a faceoff spot, on which Toews skates via clips in the ice. These are the only connections from the sculpture to the base – no visible stand holds Toews upright. The ice-skates are done with cut flex tubes, and those allow the legs of the sculpture to be angled. The shoes use small teeth on clips to represent white shoelaces on black, which looks perfect. Round plates and bricks achieve the look of the black and white stripes on the shins, which contrast with the red coloured sideways-built curved slopes in the majority of the build. 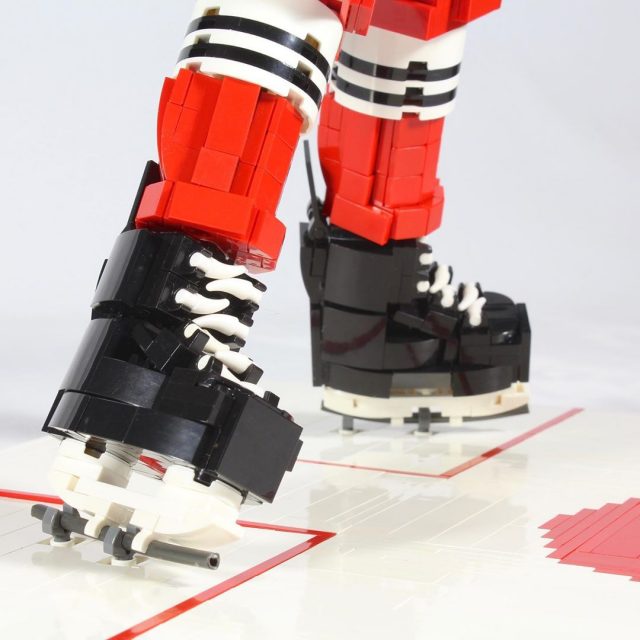 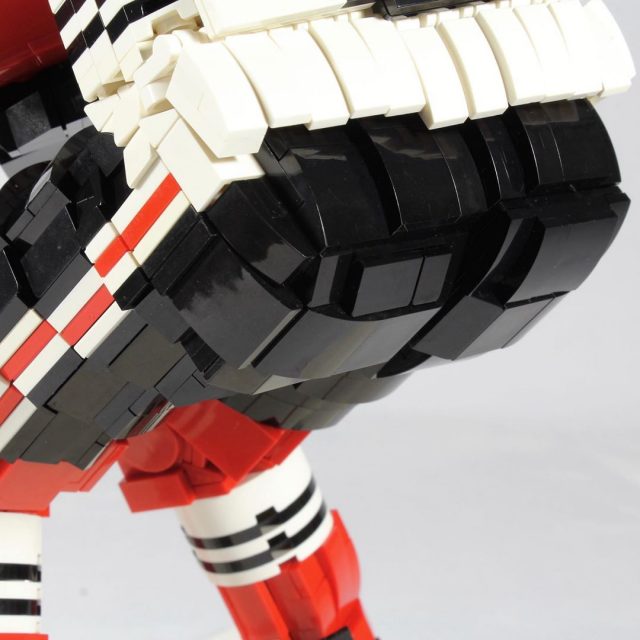 The torso looks flat compared to the rounded arms and legs, but that is to accommodate the details on it. White plates make up the number 1, with a black border around it. Things get more complex with the number 9, which incorporates cheese slopes to convey the round edges. As for the detailed Blackhawks logo in the front, words cannot convey the intricacies of the cheese slope tessellations that Kaleta uses. In fact, even I, a fellow builder, cannot figure it out. I can just stare in awe for hours and try to comprehend the details. 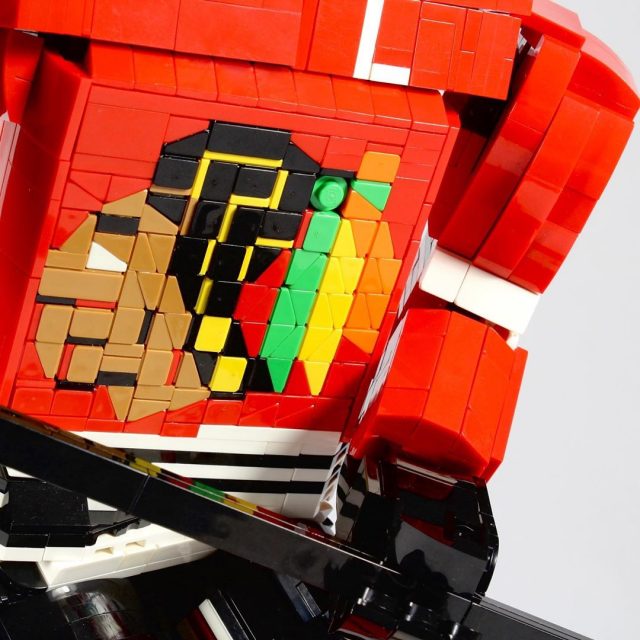 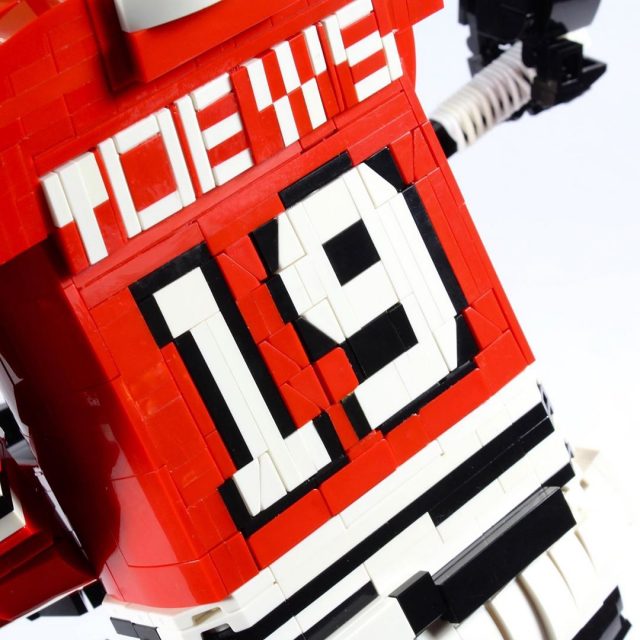 Plates make up the smaller numbers on the shoulders as well as Toews’s name on the back. This lettering technique was popularised by LEGO’s very own modular building series. As the focal point, Kaleta also sculpted the player’s head as well as the hockey helmet. The same small teeth parts make up the eyebrows crowning a simple face made up of the same curved slopes but in tan. A transparent panel part representing the protective visor connects to the black helmet on top of the head. 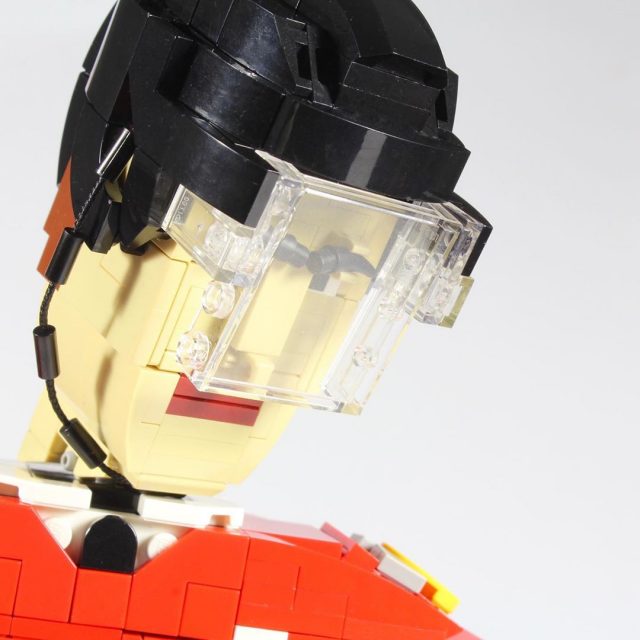 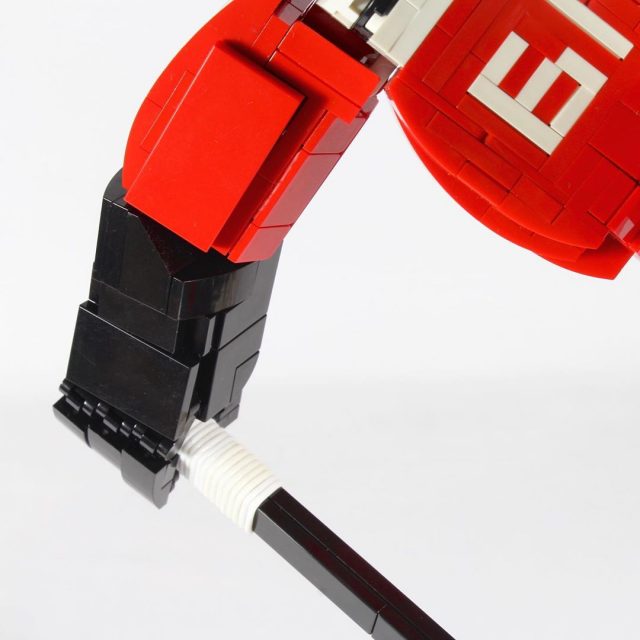 Lastly, white rubber bands wrapped on the end of the hockey stick is the last notable parts usage worth mentioning. All of these details are just icing on the cake when looking at a well-put-together build such as this. Cultural importance aside, this is an impressive model, and Dave Kaleta has really outdone himself. He has said that the build fell apart after the first photoshoot, forcing him to rebuild it with stronger connections. Kaleta compared this slight setback to the recent fall and return to fame of the Chicago Blackhawks team, all of which he found poetic.

While researching hockey (Shocking! Why would I write about something I don’t know about?) I found some interesting trivia relating to LEGO and consequently, this model:
A Blackhawks player named Alex Kaleta* coined the hockey phrase “hat-trick,” which is when a player scores three goals in a single game.
A retired hockey player from the Buffalo Sabres named Patrick Kaleta* built LEGO in his spare time to relax. The knowledge of more and more AFOL sportsmen brings me joy.

* no relation to Dave Kaleta. I asked him about it.