I hear it all the time from would-be builders that they just don’t have enough pieces in their collections. “I can’t make anything cool,” they bemoan, as if having a billion LEGO elements at their disposal would make building easier. Now, in some respects, that is true; having more parts does expand the horizons of what you can build. But more importantly, building cool things comes from an eye for how to use the parts one has, rather than the parts one wishes one had, and a small collection is as good as a large one in that respect. Take this windmill by Inthert, for example. It’s not huge. It didn’t take a lot of parts. Granted, there are some specialty parts like the green palettes and the green feathers, but most of what is in the build could come from the collection of anyone who has a few sets. It’s in the art of arrangement, the way the parts are used, that the coolness comes. And that comes not from having a ton of bricks, but from using them a ton and getting familiar with them. 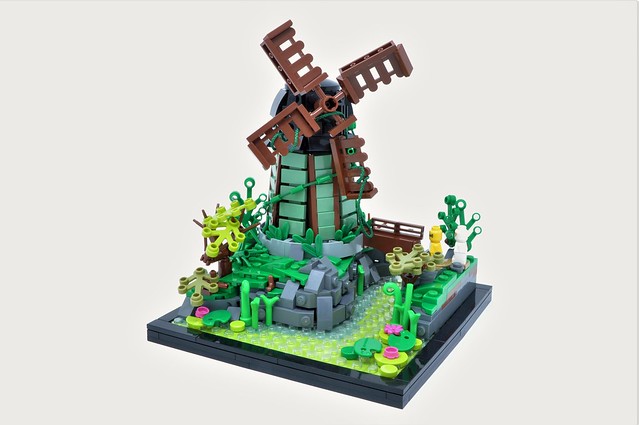 For example, who, having the fence piece, thinks to put it into the bottom of a jumper plate? Not I. And the tiny round tower, the artfully placed foliage of all sorts, the grille tile fence…the list of clever constructions goes on. And the little Heroica figures are just the cherry on top. And it did not take a billion bricks! So what are you waiting for? Go get your collection out and start building something, if you aren’t already. With this quarantine, I know you have time.