Aviation history is littered with beautiful and promising designs that did not make it into production. Famous examples are the Canadian CF-105 Arrow and the British BAC TSR-2. Imagining what they could have achieved can entertain aviation enthusiasts for hours. That also applies to my latest aircraft model: the Northrop/McDonnell Douglas YF-23, unofficially known as the Black Widow II. It was the losing contender in the USAF’s Advanced Tactical Fighter competition. It should replace the F-15 Eagle and counter the new Soviet/ Russian fighters under development in the seventies. To do this, it had to incorporate three features that were never before combined in a single aircraft: fighter-like maneuverability, stealth, and the ability to cruise at supersonic speeds. 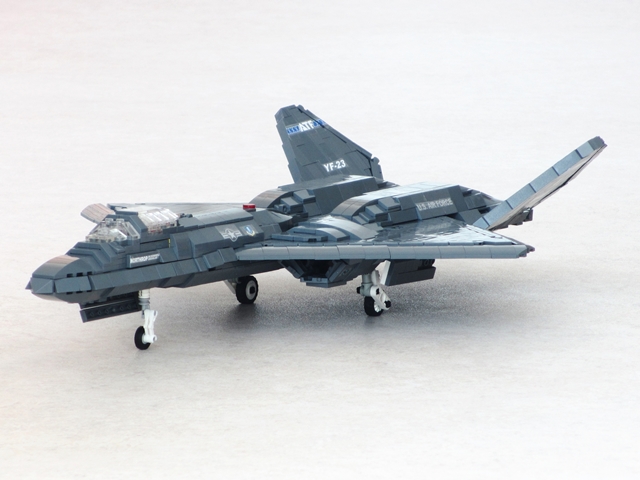 The shape of the world’s first known stealth aircraft, the F-117A, was all straight lines and flat panels. At the time Lockheed designed it, they couldn’t yet calculate how curved surfaces would reflect radar signals. Northrop, however, experimented with much smoother Gaussian shapes. In the deepest secrecy, they built an aircraft called Tacit Blue. It looked like an inverted bathtub with wings, but it worked. They applied this knowledge to the YF-23 in an altogether more pleasing shape. Cross-sections of the forward fuselage have a rounded top and sloping sides that end in a distinctive fuselage chine. The wings have a diamond shape, as do the large, angled tailfins. These combine the function of traditional horizontal and vertical tailfins. Humps on the aft fuselage, known as bread loaves, hide the engines. To reduce their IR signature, the exhaust gasses are guided through long troughs. The jet is long and sleek. It looks unlike anything else ever flown. 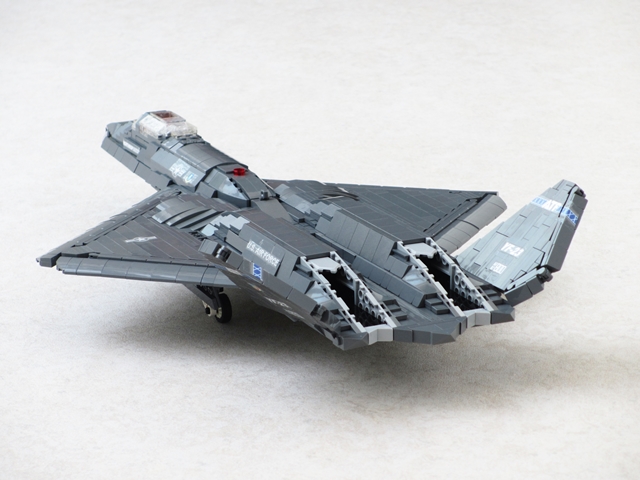 Lockheed won the competition in 1991, with its YF-22 design. This became the F-22 Raptor, which is the USAF’s primary air-to-air combat fighter. It, too, is stealthy, of course, but its configuration is similar to the F-15 Eagle. If you let them, those same aviation enthusiasts that can rave about the Arrow or TSR-2 will tell you a whole plethora of reasons why the YF-23 lost. I think it was the prettiest of the two contenders, but perhaps its configuration was a bit too radical. Recreating it in LEGO certainly meant digging deep into my bag of tricks.

2 comments on “A shape unlike any other fighter: The Northrop YF-23”