When I think back to the LEGO sets I loved most as a kid, two come to mind: 6075 Wolfpack Tower and 6048 Majisto’s Magical Workshop. What made them special? Well, perhaps it was the opening functions they both had, so that I could have both a fully-enclosed building and a fully-accessible interior for my characters to live in. That, and I loved both wolves and dragons, so they had cool shields. Some castle builders (myself included) generally just build an interior room or exterior tower or wall from a particular angle, with a rainbow of parts behind the scenes. It saves time and bricks to do so. But when Isaac Snyder constructs a building out of LEGO, 99 times out of 100 it includes a full interior. Every part of the build is playable, accessible, and carefully thought through. It is like the sets of my childhood, only a billion times cooler and more detailed. 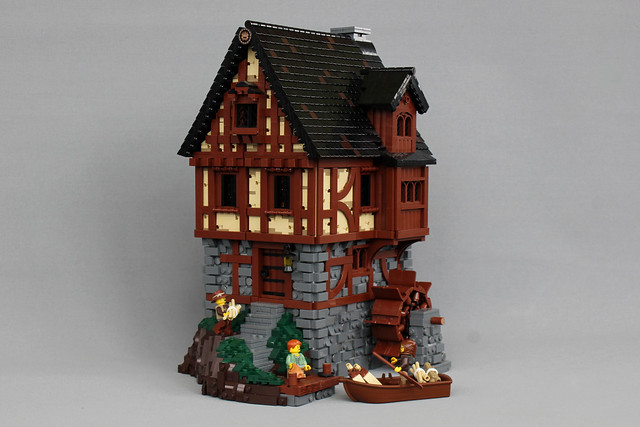 I adore roofs made from cheese slopes, and surprisingly for someone as prolific in the castle genre as Isaac, this is his first use of the technique. The chairs on the waterwheel look perfect, and everything has the polished Snyderian look one expects from Isaac; nothing seems out of place. Inside the structure, several things stand out, the first being that every level is accessible via a ladder or stair, with specific holes in the floor to move minifigures around. Kid me would have had a heyday making characters go up and down the stairs, falling through the holes, and so on. Second, there are beds and other practical furniture, which castle sets seldom had. Friends sets do, but not castle. Third, and perhaps most excitingly, the mill really spins! The gears connect to the grindstone, so you can make your very own ABS flour. Play functions and aesthetics. What more could one want? 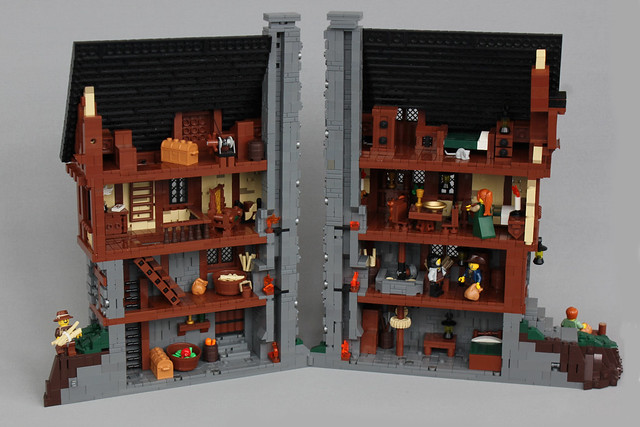