I love Christmas as much as anyone. In fact, I would wager that I love it more than most people. But I have to admit that my jaw clenches, a tic twinges in my cheek, and my guts churn when I start seeing Christmas merchandise and commercials before Thanksgiving. I once worked at a store where the Holiday displays came out at the beginning of October, and I had to see them almost every day for three months. It was torture. And the Christmas songs played on a loop piped into the stores – don’t even get me started on how much I despise all 3,000,000,000 versions of “Jingle Bell Rock”. That being said, I do appreciate a good LEGO build when I see one, even if it is Santa Claus at the start of November. Kale Frost had the opportunity to build a huge Christmas display for a mall out of LEGO bricks, and the head of the Head Elf is particularly noteworthy. 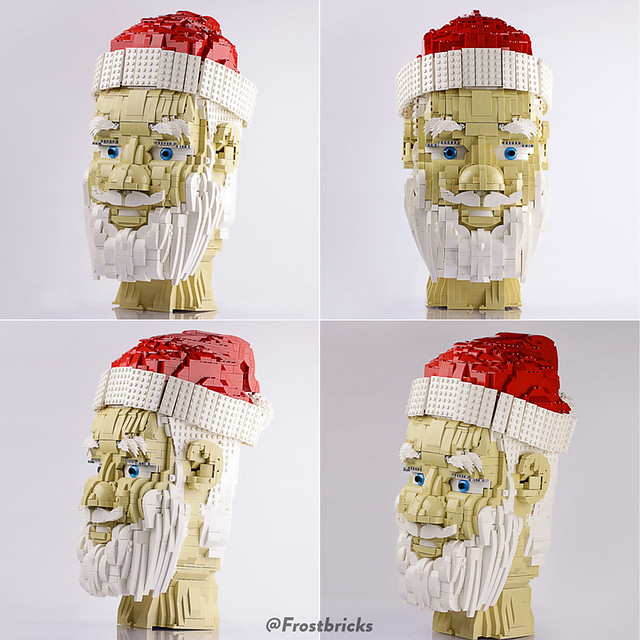 The bushy white eyebrows make good use of some wings, and the clips are surprisingly effective as eyelashes. I love the clear blue eyes and the jolly face. This Santa looks like he needs some more cookies, though, since that neck is not as, ah, girthy as I would expect. It doesn’t look like he is hiding multiple chins behind that LEGO beard, and he is hardly ruddy. Perhaps this is Santa after some weight loss and exercise, getting swoll in the North Pole Crossfit Gym. Not that it really matters, as long as he leaves me some presents under the tree — the kind that make the proper rattling noise when shaken.