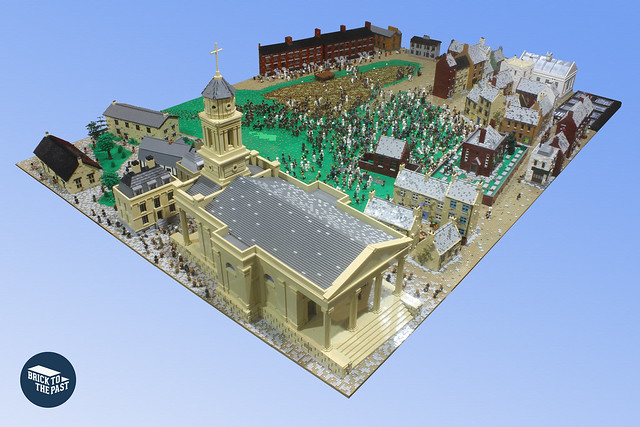 Despite having not witnessed the event myself, I would say they did an excellent job. Their model, first displayed on October 5th and 6th at the Great Western Brick Show in Swindon, England, showcases an incredible amount of impressive details. Perhaps most notable is the sheer amount of minifigures included: over 1000 in total. They’ve done well to create period accurate characters too, both with the civilian citizenry and the various military units (including tons of specific collectable minifigures). They even printed custom banners, accurate to what the people were carrying that day. My favourite aspect of this creation is how the buildings and landscape flow together to give both a realistic and historic look and feel. Looking at the ground, it’s clear the texture and colour palette are very deliberate; nowhere is the ground simply bare plate. Almost everywhere you look, you will find plates stacked upon plates, or mixed in with tile. Each building is in itself a wonderful model, but the real beauty is in how they’re laid out. Sure, the builders could just be sticking with the layout of the village they’re recreating, but their commitment to angles is what really does it for me. Rather than stuck down in the typical right angles that LEGO studs are arranged in, these buildings appear at all angles and distances from each other in a way that’s reminiscent of the era. Overall, this is the sort of historical layout that I dream of building and will continue to be an inspiration for my own future creations.