There is an ancient manner of hunting that involves the use of a trained hawk to catch the prey. Few now practice such an art, but LEGO builder Hongjun Youn has created one such hunter, who is perhaps one of the two left in Korea, the builder’s home country. Shown with his hawk perched on his shoulder, the pose is regal, the sort of thing you might see in an old National Geographic magazine. What sets this build apart from the crowd is the level of texture, something difficult to do with hard plastic bricks. While the hawk is one of the better ones I have seen at this scale, the best feature is the deeply lined and weathered face of the hawker, implying that he has spent most of his time outside exposed to the elements. 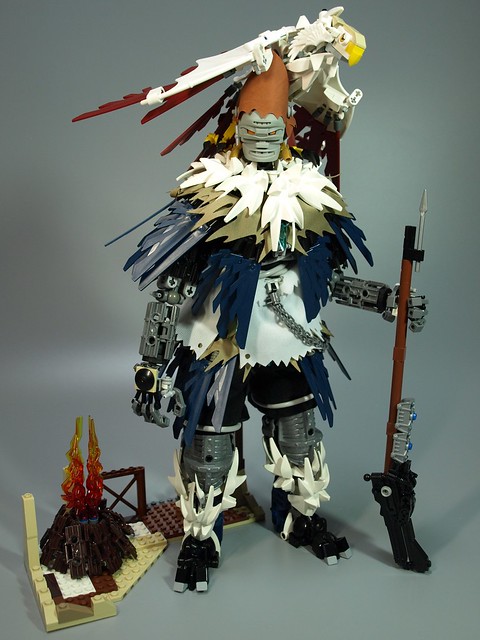 Speaking of the face and the elements, it took me a while to figure out what pieces the builder used. A deep dive into Bricklink revealed them to be a hockey mask from the 2003 Sports theme and another hockey mask flipped upside down; together they make for an impressive and expressive visage. The glorious fur texture around the neck and boot cuffs, as well as the neck feathers of the bird, is accomplished by the use of this armor piece, and the layering of various tattered cloth elements completes the look. All in all, this pair of hunters looks ready to set out into the wilderness and bring back some game.

1 comment on “A hunter weathered and a hunter feathered”