The best architecture, oftentimes, like the best LEGO builds, is not terribly original; instead, it repeats the same forms over and over again, but in arrangements that show precision and careful thought. Within that repetition, there is room for extreme creativity (which is how we get such diverse LEGO builds, despite everyone using the same basic parts). In fact, Gothic architecture includes subtle differences even in areas that are “matching,” like the columns going down a medieval church; look carefully and you’ll see that not one of them is exactly like the others. And yet they are still matching and repetitive. This library entrance by Brother Steven illustrates this nicely. Similar to the Cathedral of Notre Dame, one of the crown jewels of Gothic architecture, the towers are of different heights. 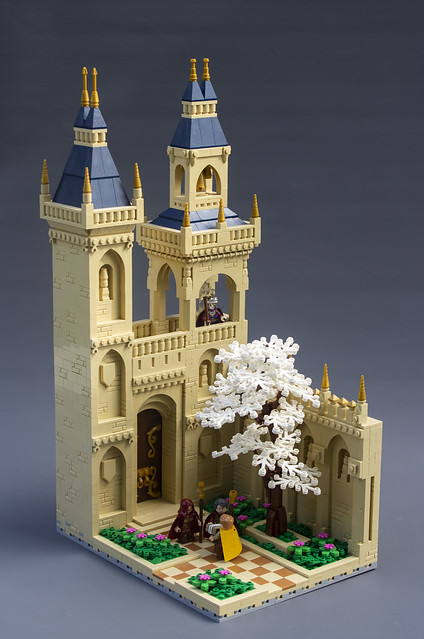 Looking at the towers and the walls, there is something beautiful in the repetition of the shapes, something that ties it all together into a cohesive whole far better than anything novel could have. The 1×1 round bricks is the most obvious example, but the use of a studs-out strip beneath them heightens the repetition. The arches in the walls also match, with some having the Nexo shields and others having small statues. From there, subtle variations (like modified plates on one tower, and a small gap between the 1×1 round bricks and the studs-out strip on the other) add visual interest in a Gothic way. Gold accents, like the floral hinges on the doors and the unicorn horns on the battlements, set things off, and the white tree and verdant vegetation give the primarily-tan build the color it needs to pop. And pop it does!