I’ve always loved how a single LEGO piece has the power to inspire an entire build, as was the case with this awesome mech by Chris Perron. The building of this marvelous monstrosity was motivated by the yellow Fabuland ladle part, which Chris wanted to incorporate into a sci-fi creation after seeing it used in a someone’s castle-themed creation. Finding a spot for such a strange piece likely proved challenging, but the builder managed to find a perfect spot for them on either side of the mech’s head, to form what looks like a respirator or perhaps like rounded cheeks. 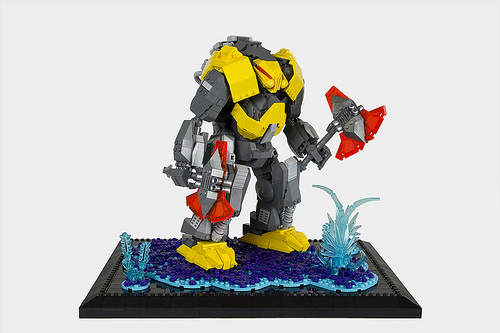 Ladles aside, the build overall looks like a wonderful mashup of Nexo-Knights LEGO universe, Warhammer 40k, and a beefed-up Bionicle Rahkshi. While the builder could have called it a day after the mech was completed, he went the extra mile and made a simple but effective alien environment base, which perfectly completes the final display.