Minas Tirith, the Tower Of Guard, capital of the nation of Gondor, principal defender of the Realm Of Men against Mordor’s dark threat. This famous city from Tolkien’s Lord Of The Rings has been the subject of many a LEGO creation, but it’s seldom looked better than in this rendition by Koen. The model is large, despite being built in microscale, and is composed of around 11,500 pieces. Taking six months to design and build, it’s remarkably faithful to the films’ version of the city. All the key elements are here — the great curved walls, the massive spur of rock, the tall citadel and the single white tree found on the topmost level. Koen has even gone as far as to include the tombs of the Gondorian Kings and their Stewards, situated behind the citadel itself. 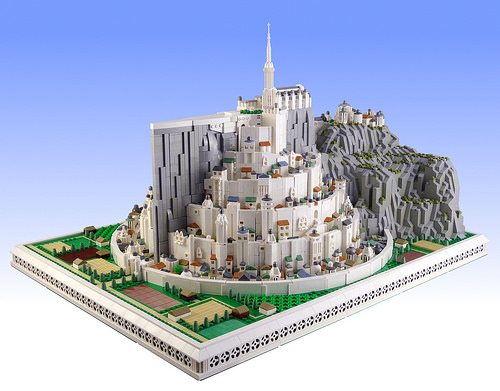 The Pelennor Field, the large plain before the city, is seen here in happy prosperous times with farms and forests right up to the city walls, which makes a pleasant change from its usual appearance as an orc-ravaged battlefield. Koen has shared more images which show the details of the buildings within the lower rings, and the various techniques employed to give them varied texture and shape. The muted “sand” shades of green, red, and blue used for the roofs gives a sense of realism whilst providing a pleasant contrast to all the white. 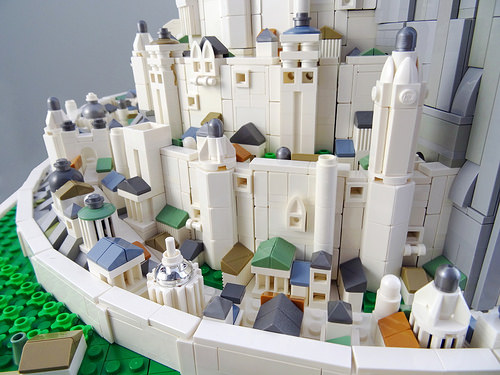 My only quibble with this model arises from its accuracy to the film version of the city. It has always irked me that the outer wall in the movies was white to match the upper levels, when in the books it is described as hewn from the same arcane black materials as Orthanc. However, it seems harsh to hold that against such a wonderful piece of LEGO art, so I’ll push my Tolkien-geekery to one side and instead appreciate the building skills which went into this wonderful creation.