The LEGO Ninjago Movie and the new 2017 Ninjago sets that will accompany the film are set to release this September. To tide ourselves over until then, let’s take a look at Set 70623: Destiny’s Shadow which was released earlier this year. 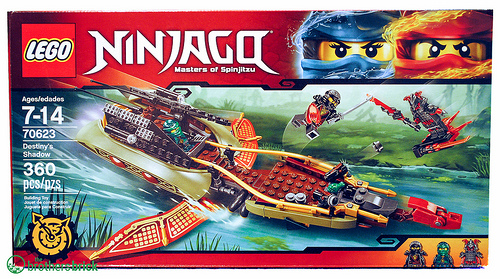 The set retails for $29.99 and has 360 pieces. Considering the $0.10 per piece pricing many LEGO fans have come to expect, Destiny’s Shadow actually comes in below the expected price range. Additionally, the set currently has a 4.8 out of 5 stars review on Amazon (courtesy of five, yes five, total reviewers who either bought the set for their son or their grandson). Not bad! 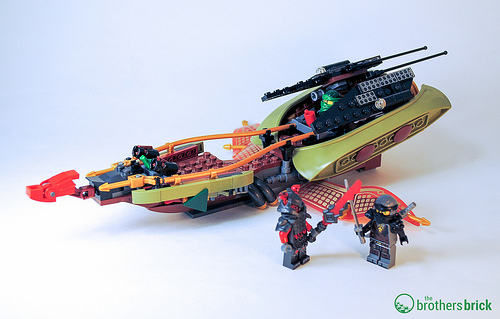 The set includes two instruction booklets, three numbered parts bags, three minifigures, a large boat/plane vehicle, and a minifig-scale hoverboard thingy. It’s also got a few clever play features on the vehicle, a rather diverse color palette, and best of all, there’s not a single sticker to speak of! 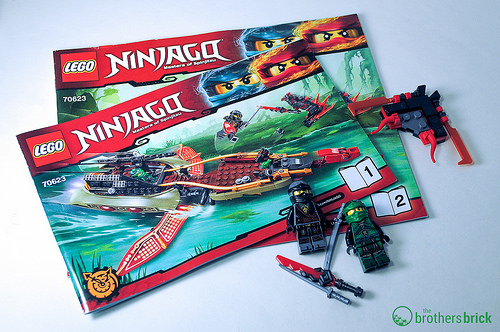 The minifigs included (from left to right) are Lloyd Montgomery Garmadon, Vermin, and Cole. The heroes come with two-toned ninja hoods and the bad guy has a pretty sweet armor-helmet combo. The printing on all three torsos and legs is great because there is a lot of detail on the front and back. 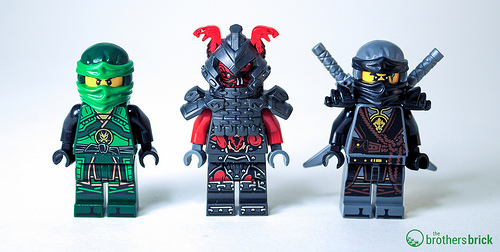 Vermin’s snake details are particularly interesting (though this bit is covered up when he wears his armor). Cole comes with a standard (and somewhat bland) single-sided head, while the other two minifigures have doubled-sized heads that inject more personality into the characters. 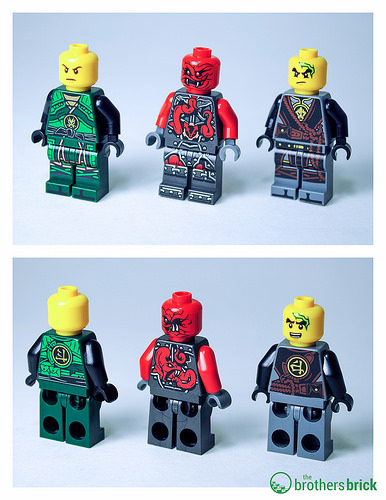 As for the vehicle, it’s a narrow but sturdy boat with wings. For play features, it’s got your standard stud shooters and when you press the yellow brick on the back, the wings pop out, converting the boat to plane in a snap. Also, the two olive green canoes detach from the main vehicle. Strangely, these “life boats” seem to have more space for passengers than the main vehicle does. But I guess it’s always better to be safe than sorry. 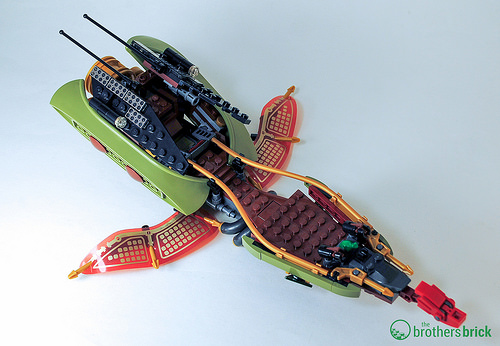 The build itself was more challenging than I expected. Though the set is designed for builders as young as 7 years old, I found myself forced to take apart the nose of the vehicle after realizing I had made a mistake several pages back (the shame!). There are also some interesting two-point connections along the side using Mixel ball joints, though these too gave me some pause as I had to press in firmly enough to connect the pieces, but not too firmly as to crush the entire vehicle. 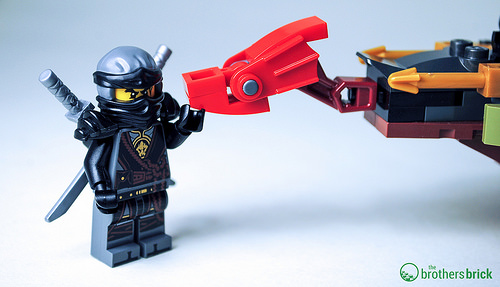 While the trans-purple studs look great on the gold exhaust/engine pieces, I had a difficult time getting a 1×1 stud to stick in the center of one of the wheel pieces even though I tried multiple different 1×1 round studs. Presumably, there is some variance with the wheel part. I didn’t notice any damage on either of the wheels, but one held the stud firm while the other barely had any grip. For the photo below, the trans-purple stud closest to the camera is just resting inside the wheel. One tiny bump and the piece falls out, skittering across the table, never to be seen again. 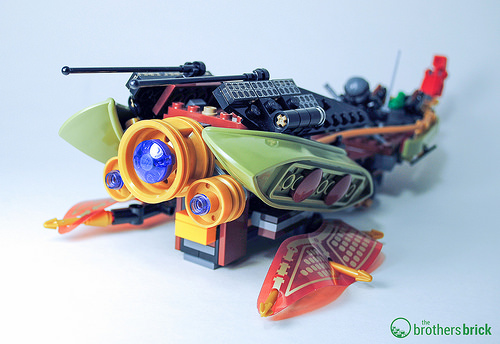 Another design flaw is the hoverboard. Yes, it looks sweet. But because the base is a 4×4 corner plate, the bad guy can’t stand facing the center of the board (instead, he has to look to the left or right). On the plus side, the design of the vehicle’s wings, which looks more like dragon wings than airplane wings, is great. And I love that there’s a steamy cup of coffee (with cup holder) waiting for the pilot. 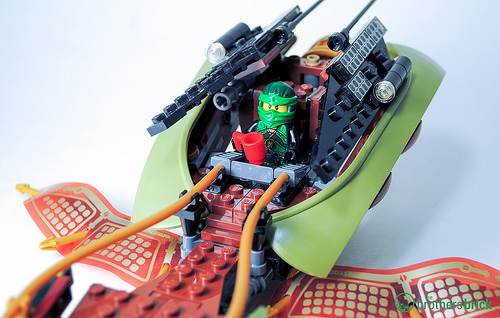 Now onto the goodies! If you’re like me, then your decision whether or not to purchase a set is probably based on the number of cool new parts it has. And this set has plenty to drool over. In red, copper, and pearl dark gray, the set has macaroni noodles, a “Pause Time Blade,” newly-colored orc blades, and Vermin’s armor and Vermillion axe. 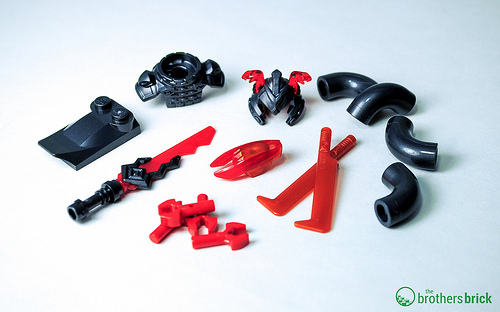 In pearl gold, there are the plastic wings (my set actually came with two sheets for four total wings, though this may have have been a mistake as the pages were stuck together), lots of harpoons, robot arms, rigid hose (which, as you can see, maintains the bent shape of the vehicle even after taken apart), and several 1×1 open studs (swoon!). 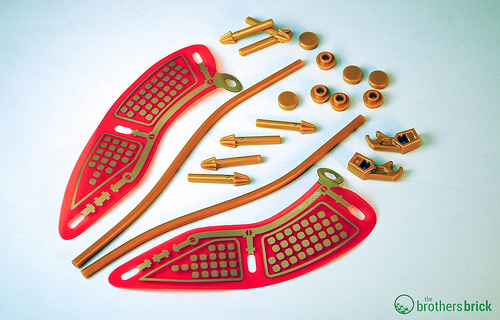 In olive green, you’ve got the two canoes, tiles, plates, robot arms, and slopes. Considering that olive green is a pretty rare color (at least considering my own collection of brick), this is pretty nifty! 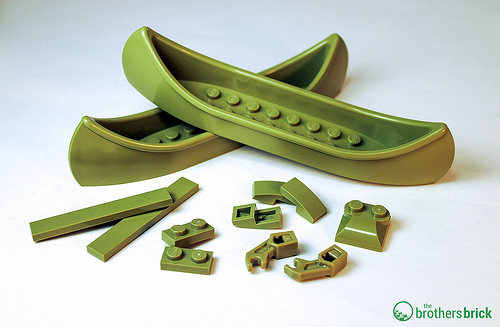 Finally, there’s a hodgepodge of neat pieces such as the gold ingots in black, the dark brown pneumatic hose connector (newly colored in this set), dark green clip-on road signs, a printed cheese slope, and a handful of printed tiles that look like solar panels. The red cattle horns (not pictured) are also a newly colored piece included in this set. 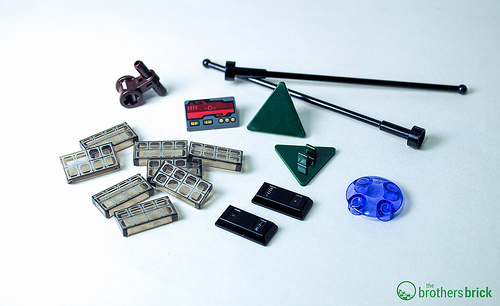 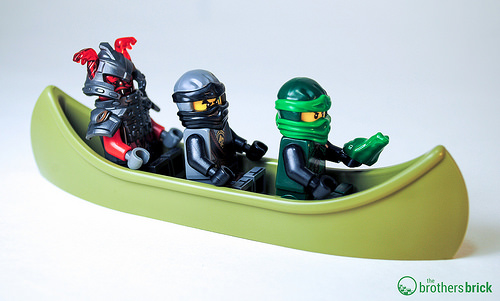