Being unfamiliar with LEGO Ninjago universe, I had no idea that besides some majestic dragons the main characters also use traditional sailboats to travel around. Teen builder Robert4168 decided to recreate one from the Ninjago: Masters of Spinjitzu television show, and in my opinion it looks even more impressive than the dragons featured in the official sets. 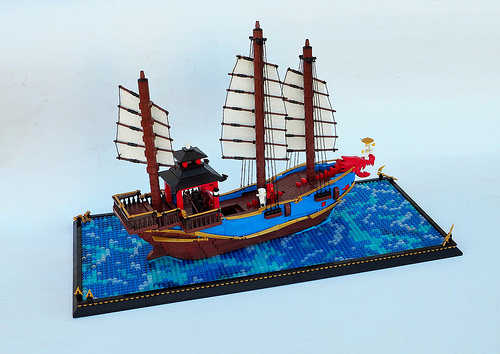 Unlike most of the builds by designers from Billund, this ship looks truly solid, huge enough to fit a whole squadron of ninjas, and features some cool authentic sails. But the best part is the perfect use of long golden blades along its boards marking off the blue and brown areas. Topped off with an excellent red dragon head, this boat fits in with both the modern Ninjago adventures and the good old Ninja sets of late 90’s.