Master aircraft builder Maelven has built some unique and historically accurate planes, but perhaps none are as eye-catching as his newest build, the Focke Wulf Ta 152 H-1. 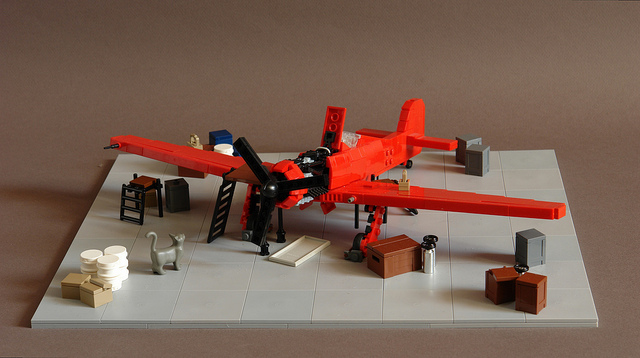 Designed by famed aeronautical engineer Kurt Tank, the Ta 152 was a last ditch effort by the Luftwaffe during the closing days of the Third Reich to combat the high-altitude bombers deployed by the Allies. Although only a handful were built the Ta 152 proved itself as a capable interceptor and among the fastest piston-driven fighters of the war. The long nose and superbly sleek design which characterized this butcher bird are created expertly here in LEGO form.

The builder chose to adorn this particular model with the red-orange paint scheme used by Luftwaffe ace Fritz Aufhammer. Legend says Aufhammer adorned his plane in such colors to notify trigger-happy Flak crews that this strange and unfamiliar aircraft was actually on their side. The Ta 152 is seen here in the process of being maintained and refitted. The exposed engine compartment is a nice touch, and along with the other details, really helps to bring this build to life.