Castle builders often depict Medieval living as a quaint and pleasant affair – lovely little farms situated upon rolling hills, castles tucked into deep forests, villagers frolicking about unencumbered by the socioeconomic factors of the 21st Century… Who wouldn’t want to live there? Perhaps this was the case for those living in the countryside, but for the residents of large Medieval cities life was decidedly darker and cruel. Jacob Nion does a fine job recreating the dreariness of Medieval urban life with his newest creation, The Black Knight’s Inn.

One has to appreciate the atmosphere in this scene. The crumbling stonework, leaning buildings and restrained color palette combine into a rather austere beauty. By building the foreground higher than everything else, the builder creates a unique sense of dimension and depth to his work. This design choice makes the scene look larger than it actually is; the angle of the buildings creates a sense that this street continues on forever. 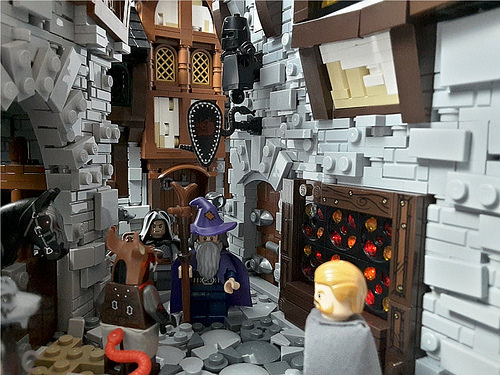 Before you get the wrong idea, it should be noted the red snake is in fact a tail belonging to one of the rodent-faced residents who live here. There are plenty of dangers lurking in the darkest alleys of a Medieval city, but fortunately butt-biting snakes are not one of them!