As we enter 2017 we look upon a world scarred by tension and despair, where reason is too often discarded for demagoguery and life made meaningless by barrel bombs, drone strikes and rampaging lorries. Intolerance seems to spread among both people and nations; the threat of violence, never far off, lurks ever closer.

These factors are not new to our species. The equation has repeated itself often in human history, far too frequently with horrifying consequences. But our viciousness is not preordained. By reminding us of our past misdeeds, history can guide us to a better future. If we forget history, we will be doomed to repeat its mistakes. Pascal pledges not to forget history’s victims with this microscale version of Auschwitz. 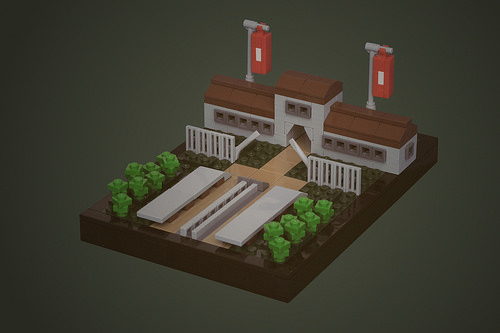 Figures vary, but as many as one million people were killed in Auschwitz before Soviet troops liberated the death camp in January, 1945. Nazi Germany’s largest such facility, Auschwitz was the epicenter of what was perhaps mankind’s most barbaric moments. One could certainly praise the builder for this accurate and detailed recreation of Auschwitz’ infamous gates. But what is most striking is the message Pascal adds to it, hopefully lost on no one, that our darkest days may return if we fail to heed their lessons.