Historical builder Milan CMadge recently shared his version of one of the most iconic and influential fighter planes of World War II, the P-51D Mustang. The P-51D was not just a spectacular fighter, outclassing most of its counterparts in combat, but a real eye-catcher too. The sleek and seductive lines that made the Mustang such a pretty plane are captured nicely here in LEGO form. 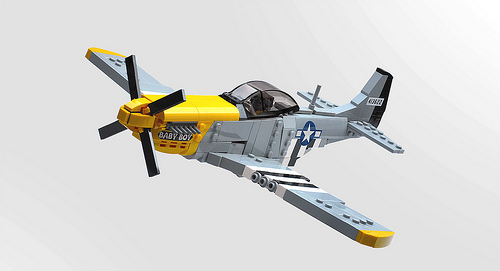 The color patterns are accurate and look really good. The stickers are conservatively applied and add a nice bit of character to the model. Overall the builder has done a fine job paying tribute to this Allied workhorse, and I would be lying if I said I didn’t want to swoosh it around my house all day!