On June 6, 1944, over 160,000 Allied soldiers – supported by hundreds of warships and aircraft – poured onto the beaches at Normandy in what was the largest amphibious assault in human history. The successful invasion eventually liberated Western Europe and helped seal the fate of the Third Reich. Lego Admiral reminds us just how big this invasion was with his awesome and expansive recreation of the landing at Omaha Beach. 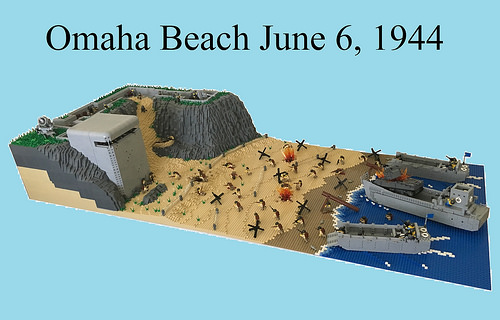 Drawing inspiration in part from the opening scene of Saving Private Ryan, the builder has done an impressive job recreating the ferociousness of combat during those first few hours on Omaha – the offloading Sherman tank hit by artillery fire, the barbed wire torn to shreds by bangalore torpedoes, the dead and dying soldiers, the exploding shells, and the imposing blockhouse pockmarked by gunfire are big highlights here. 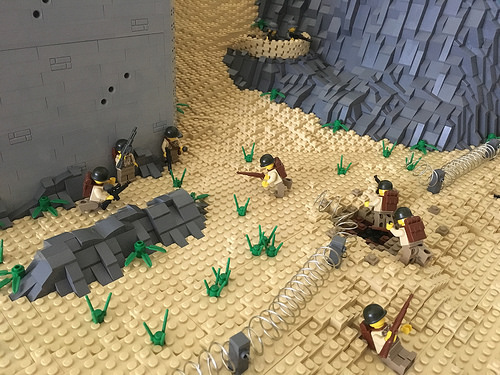 The monumental task facing the Allied invasion is illustrated by the well-situated German defenses, complete with a searchlight, anti-aircraft cannon, trenches and machine gun nests, all cleverly built. The beach itself is protected by Czech hedgehogs, Hochpfähle, and some clever concertina wire. Yet despite these obstacles, and as this build demonstrates, Allied soldiers slowly but surely made their way up the beach and on to victory. With the beachheads in hand, there was no stopping the liberation of France and the eventual collapse of the Third Reich. And while those events occurred several generations ago, builders like this help keep these momentous events in our minds – not just to recognize the best and worst traits of mankind, but also to remind us of where we should hope to not find ourselves again.