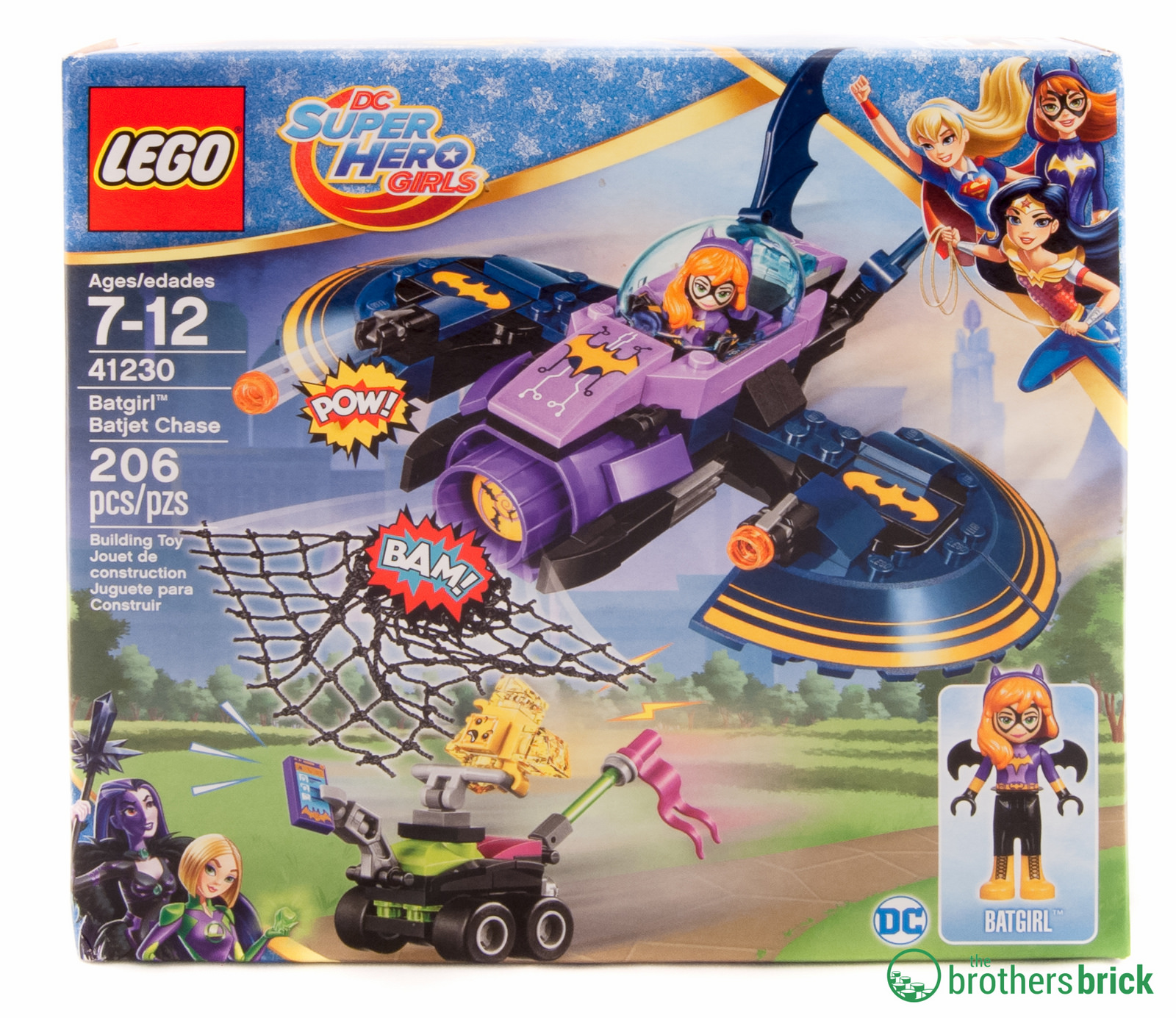 I’m pretty pleased overall with this little set. It feels like a super hero set first, and a LEGO Friends set second. This set has 206 pieces, which come in two numbered bags. The first bag contains Batgirl, the little yellow “cute but evil” Kryptomite (it is pretty cute), and a little quad thing. 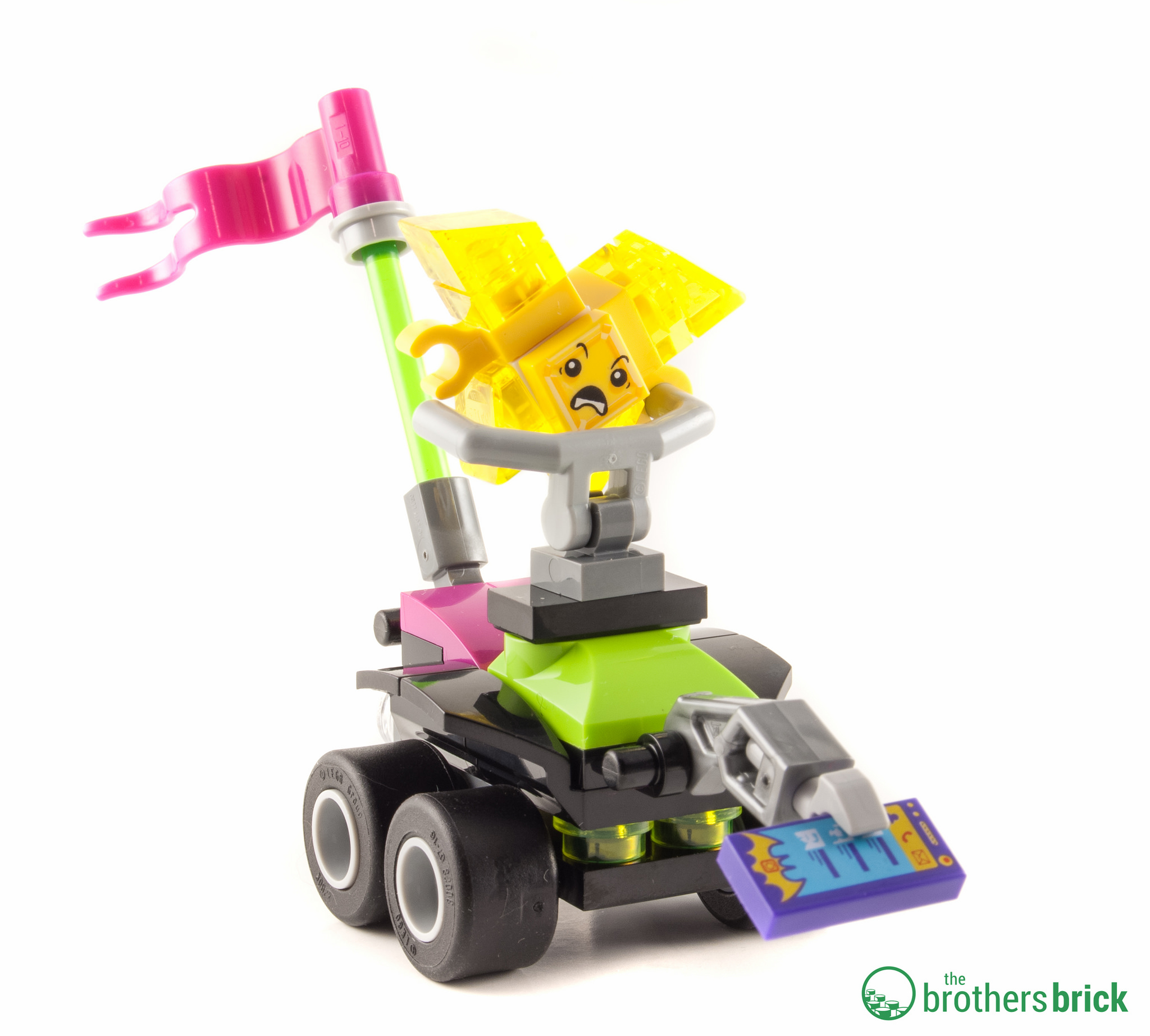 The quad’s about as exciting as you’d expect: a few slopes on wheels. I’m not 100 percent sure why there’s a grabby arm that makes off with Batgirl’s purple Batphone, but there you go. Though if some evil little yellow thing ran off with my cell phone, I’d be pretty annoyed, too. The Kryptomites are pretty darn cute and are very simple. They consist of a Travis brick, some cheese slopes, and a couple clips. I can easily see building an army of these guys from my own collection, made easier by the fact you get an extra face tile. The quad features baby bows in magenta, which are always useful. It also has a magenta flag on a trans-green 4L bar. The flag attaches with a 1×1 round light grey plate with hole, which is actually unnecessary to attach the flag. 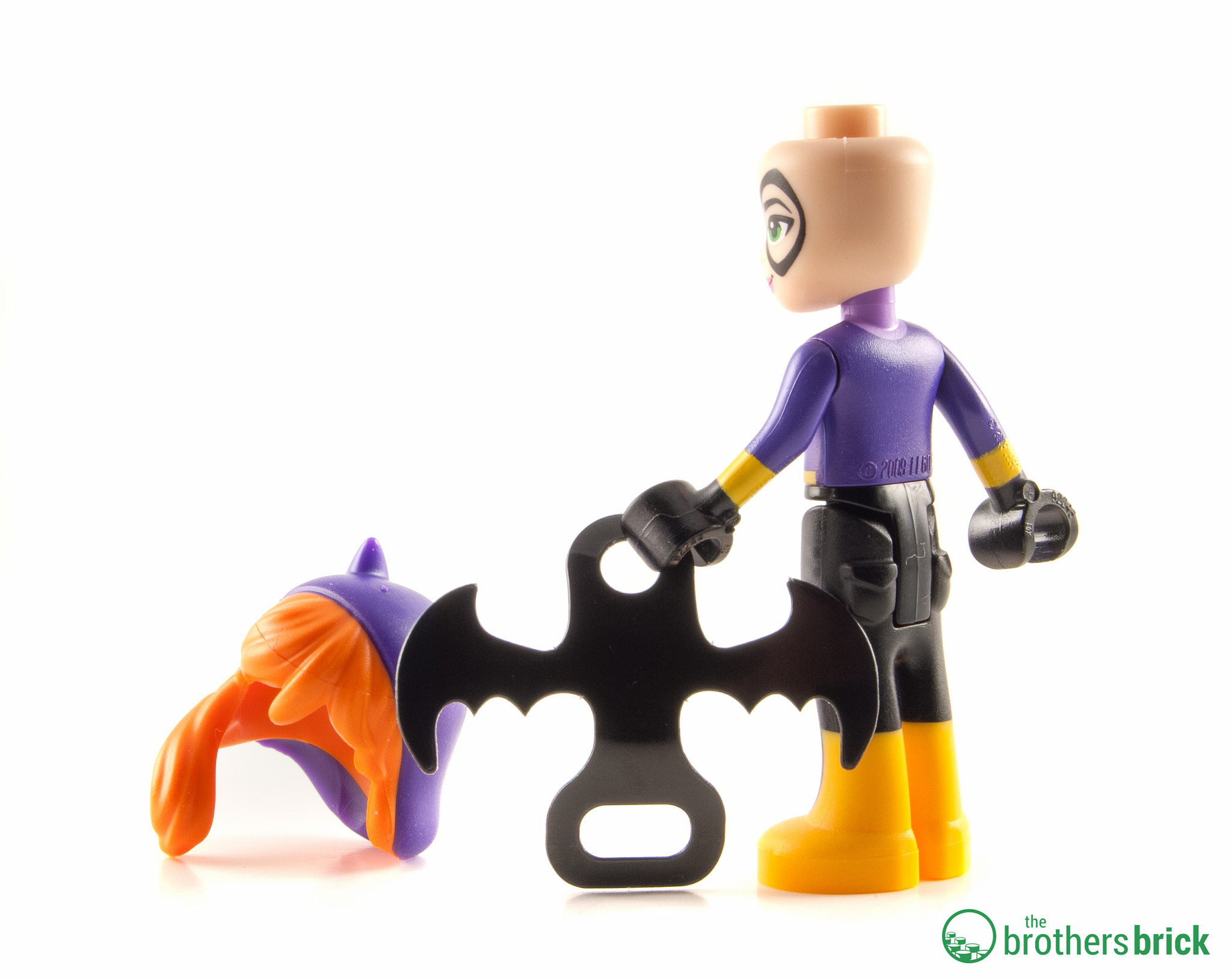 Let’s talk about Batgirl: I really like her. The hood of her sweatshirt is molded into her hairpiece; the bit of hair hanging down looks odd, because the mini-dolls are taller and thinner and the hair was designed to also be compatible with a standard minifig. So, the hair looks better in that regard on a proper minifig, but doesn’t detract overall from the mini-doll version. Her wings are a vinyl plastic sheet that hook around the leg piece and up over the neck peg. Her torso is not overly stylized but leaves no question it’s Batgirl. 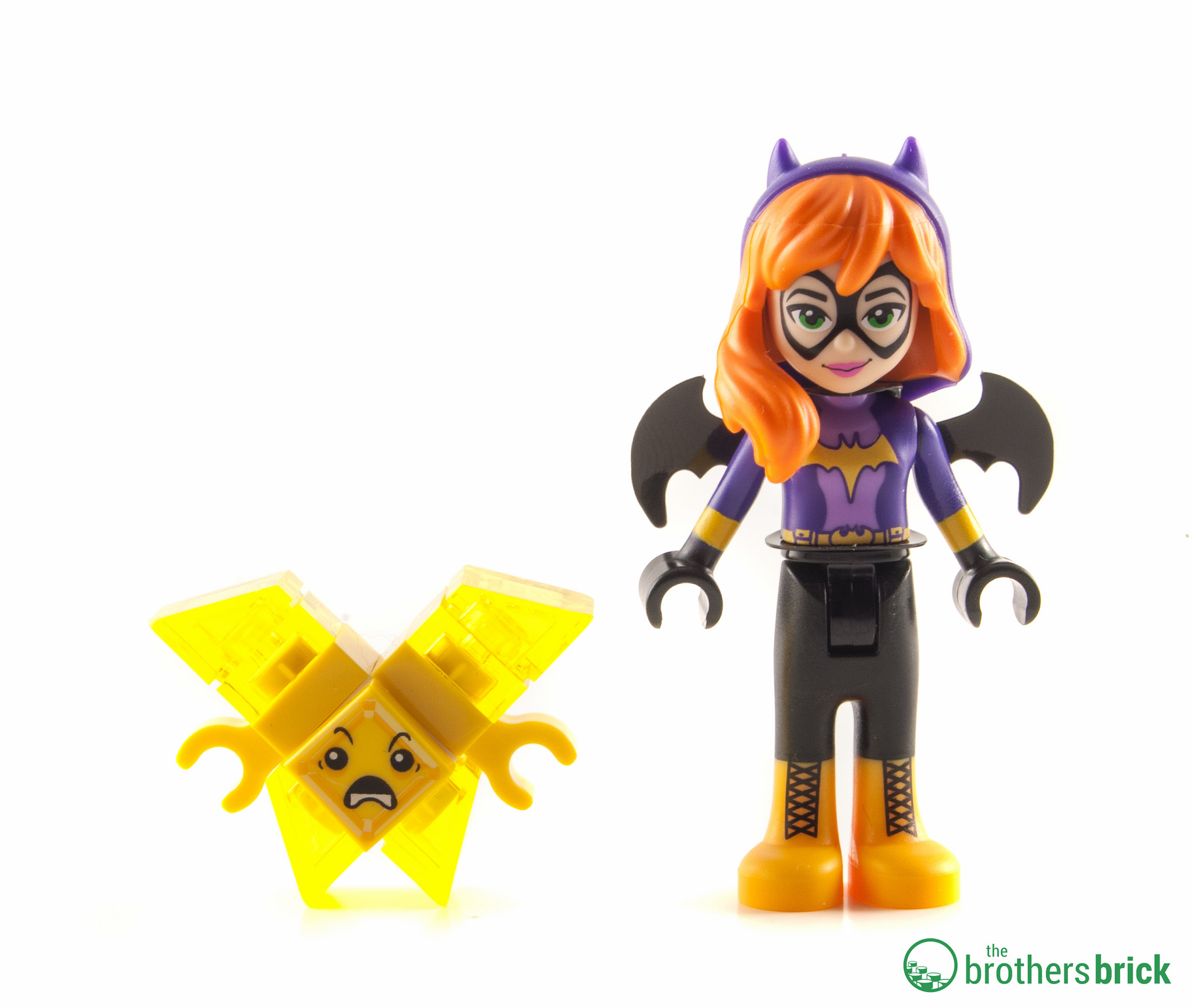 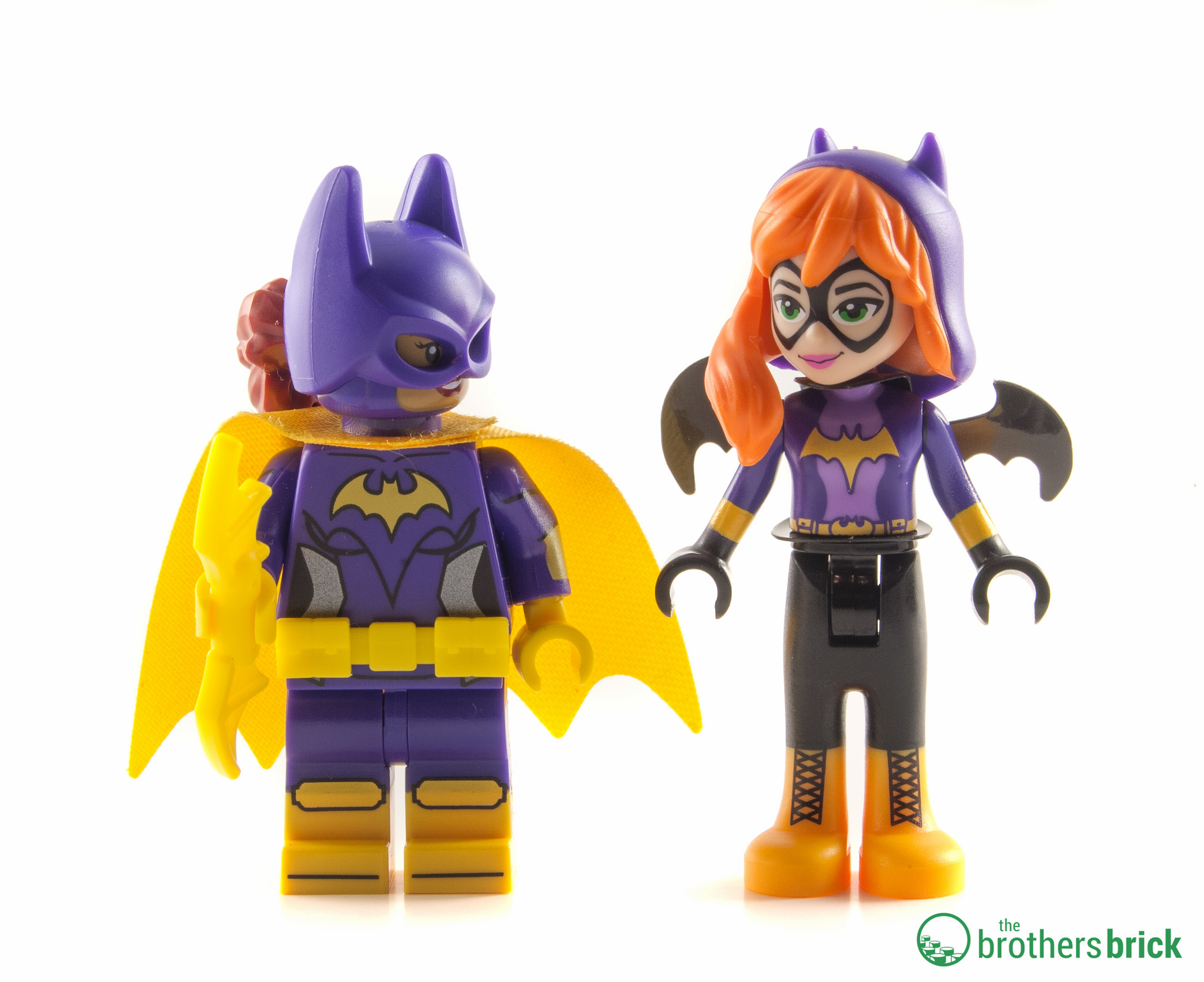 The Batjet is a lot of fun. It’s mostly dark blue, with purple for the main cockpit and engine. I like the shaping on the wings. Like usual, I’d vastly prefer all the stickered parts to be prints. It’s especially applicable here because the stickers go on a lot of curved pieces, and they’re difficult to center fully. I’m something of a perfectionist so if my stickers aren’t centered, it really bothers me. The only printed part on the Batjet is the BAM tile on the back, which is part of the mechanism for releasing the net to catch the Krytomite. The Batjet also features two shooters (one on each wing). 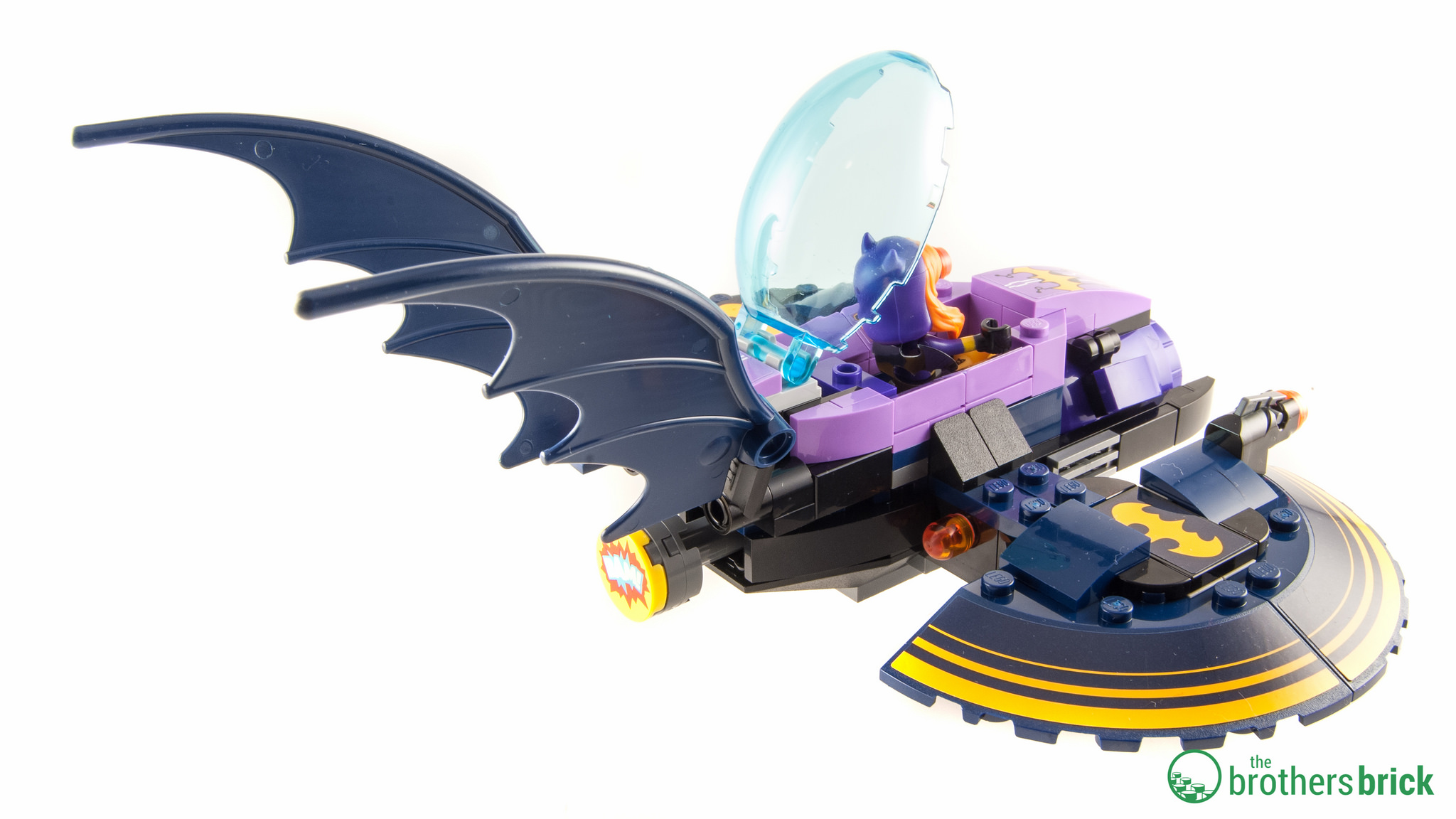 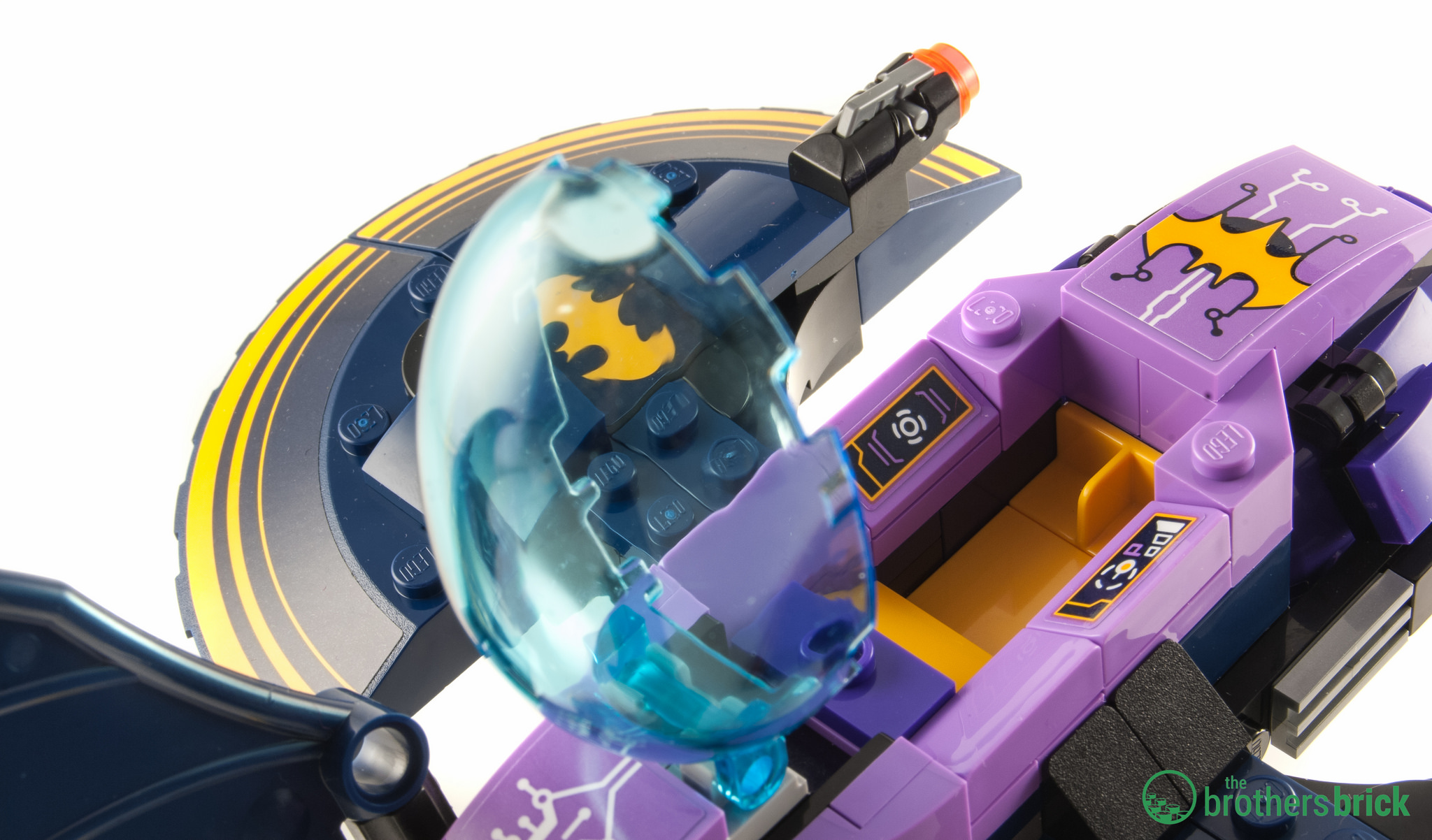 Speaking of the net, it’s a very simple, mostly effective solution. the net is balled up and placed inside the purple engine. By pushing in the BAM tile, the net is ejected. It flattens out to cover the target. When it’s balled up inside the engine, it doesn’t seem terribly secure and falls out easily. 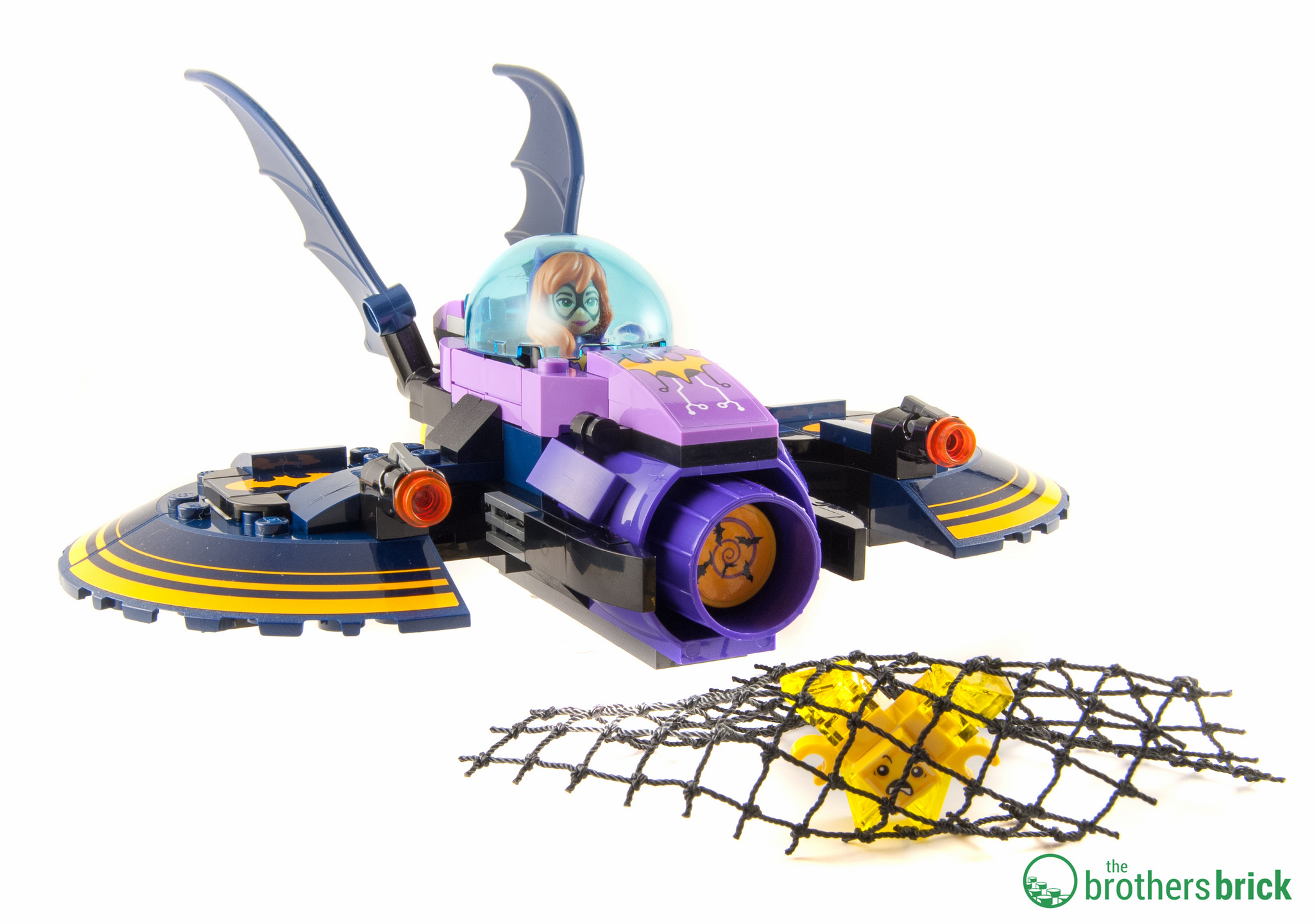 As for new parts…there are no new molds here aside from Batgirl’s hair, and only a few recolors of existing pieces or new prints. We do, however, see some of our favorite new parts. There are two 2×3 tiles we first saw in 21307 Caterham Seven 620R, and there are 6 of the new quarter-round 1×1 tiles that we first looked at in the 21306 Beatles Yellow Submarine.

At $24.99 USD and 206 pieces, it’s a little high on the price-to-parts ratio but pretty good for a licensed set. I recommend the set.

This set is available both on The LEGO Shop and Amazon. 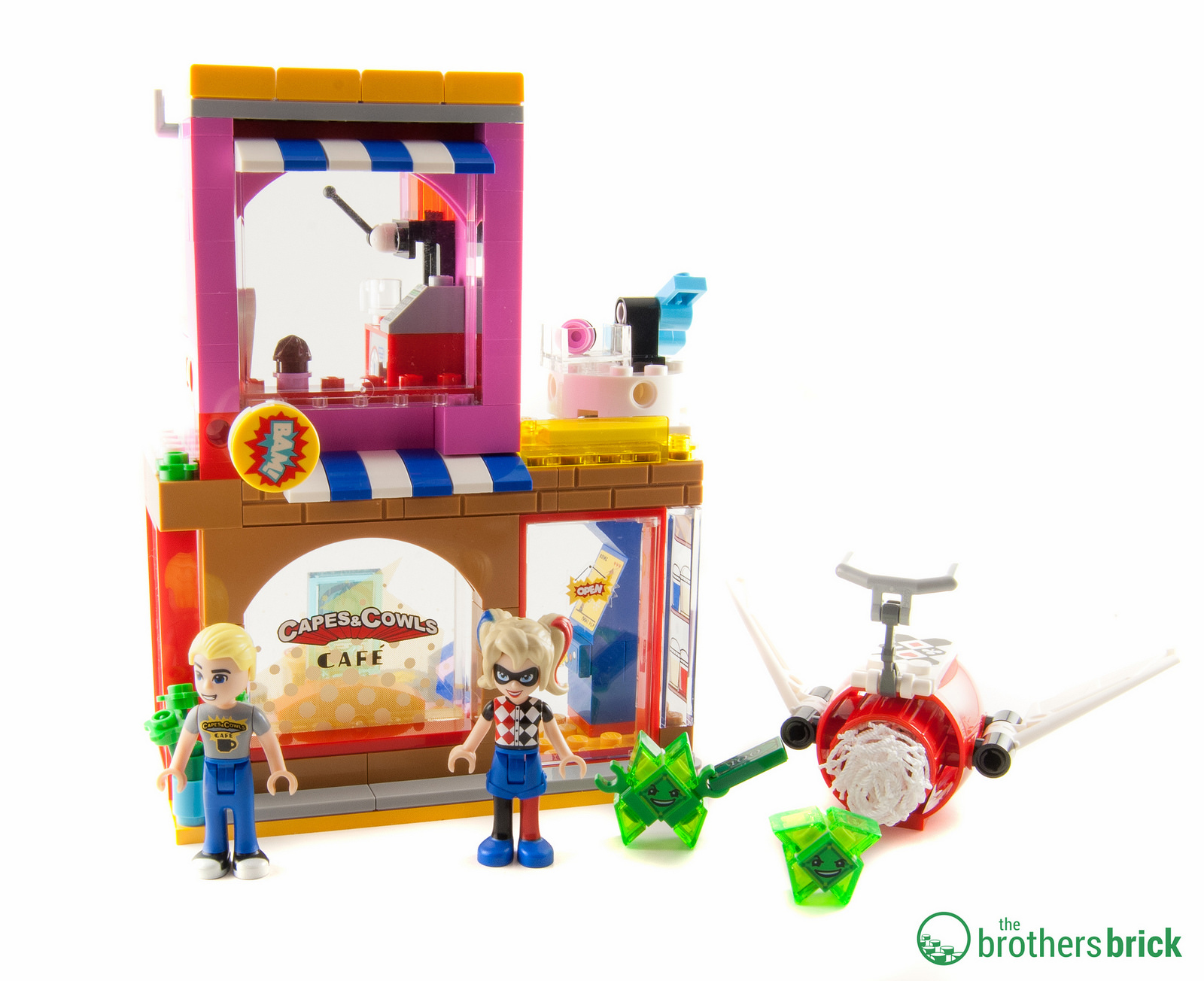 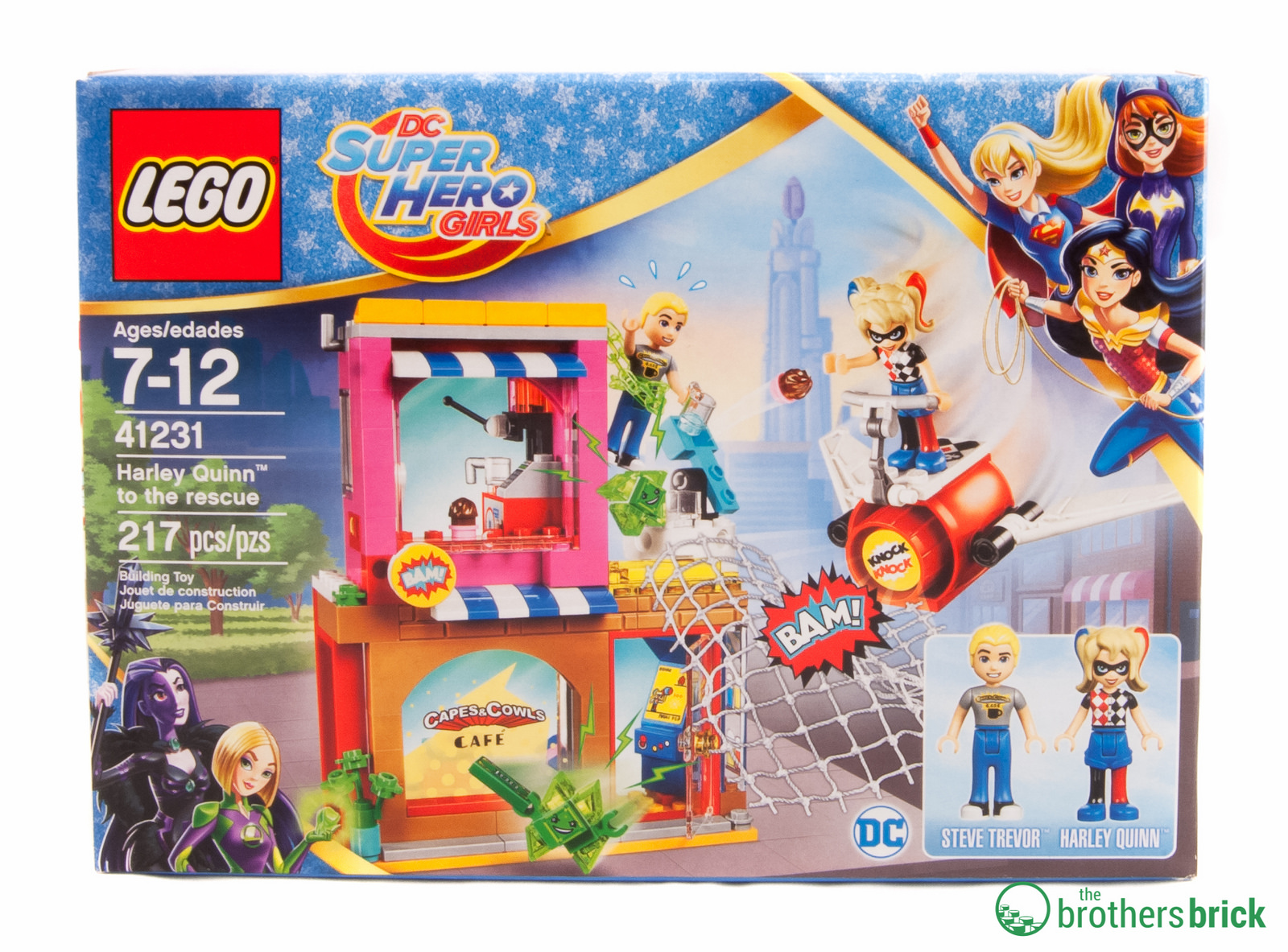 Apparently in this universe, Harley Quinn is on the good side, saving Steve Trevor from adorable little green Kryptomites. The little creatures are apparently robbing the Capes and Cowls Cafe, as best I can tell. This set is a little underwhelming; it’s $29.99 USD but only contains 217 pieces. You build Harley’s little flying contraption and a storefront. The store features an arcade game and espresso machine, along with a catapult that flings cupcakes.

Harley herself is interesting; she has a new hairpiece that’s very reminiscent of Harley from Suicide Squad. She’s got a button-up checkerboard shirt and plain pants. The checkerboard shirt looks like a great one for a bowling league. Trevor is rather bland, with Draco Malfoy’s hair in light yellow, chucks, and a Cafe t-shirt. I like the turn-about for Trevor being the lad in distress, with Harley coming in to save him from the green Kyrptomites (who apparently fling trans-green chains and steal money?). 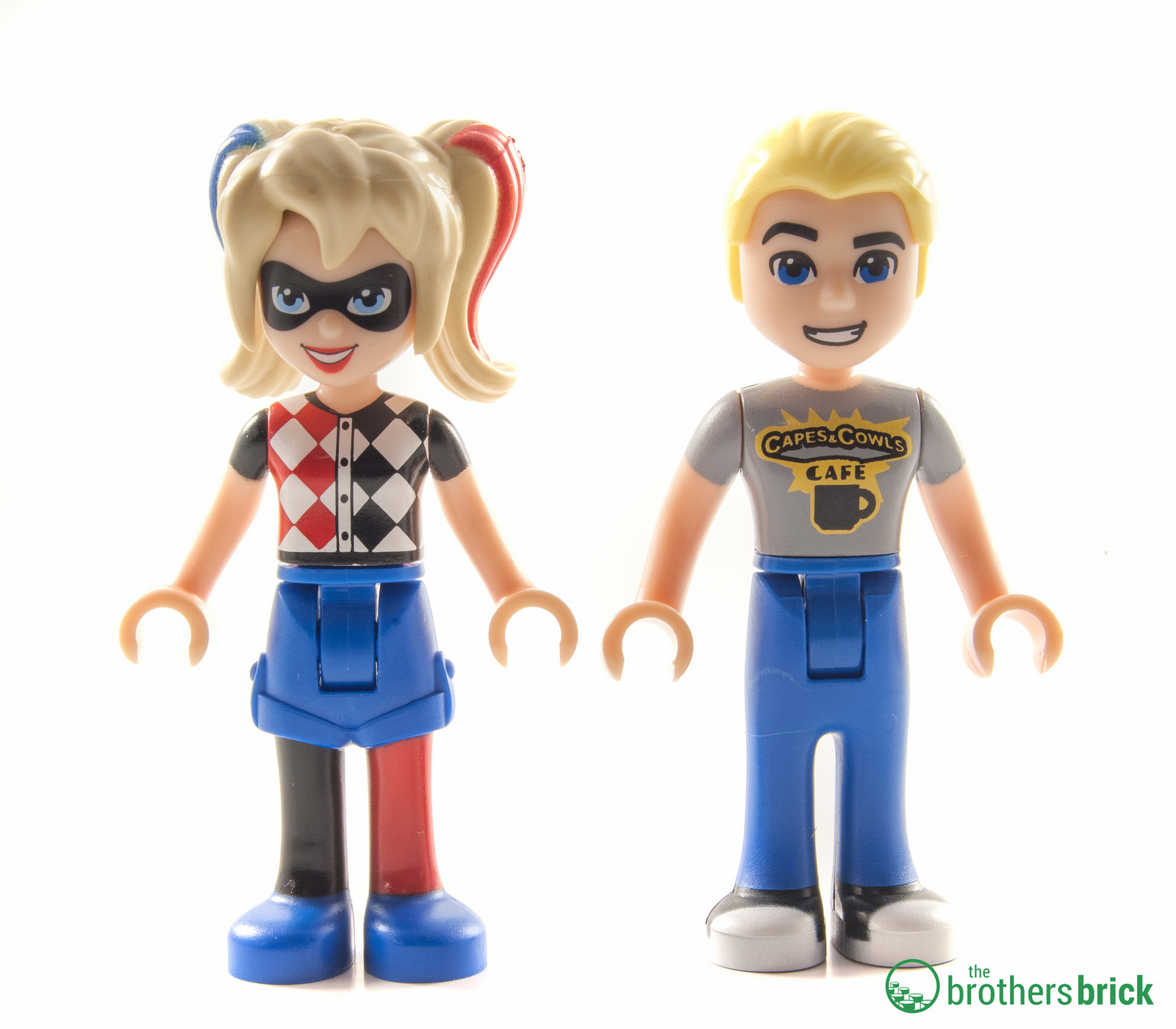 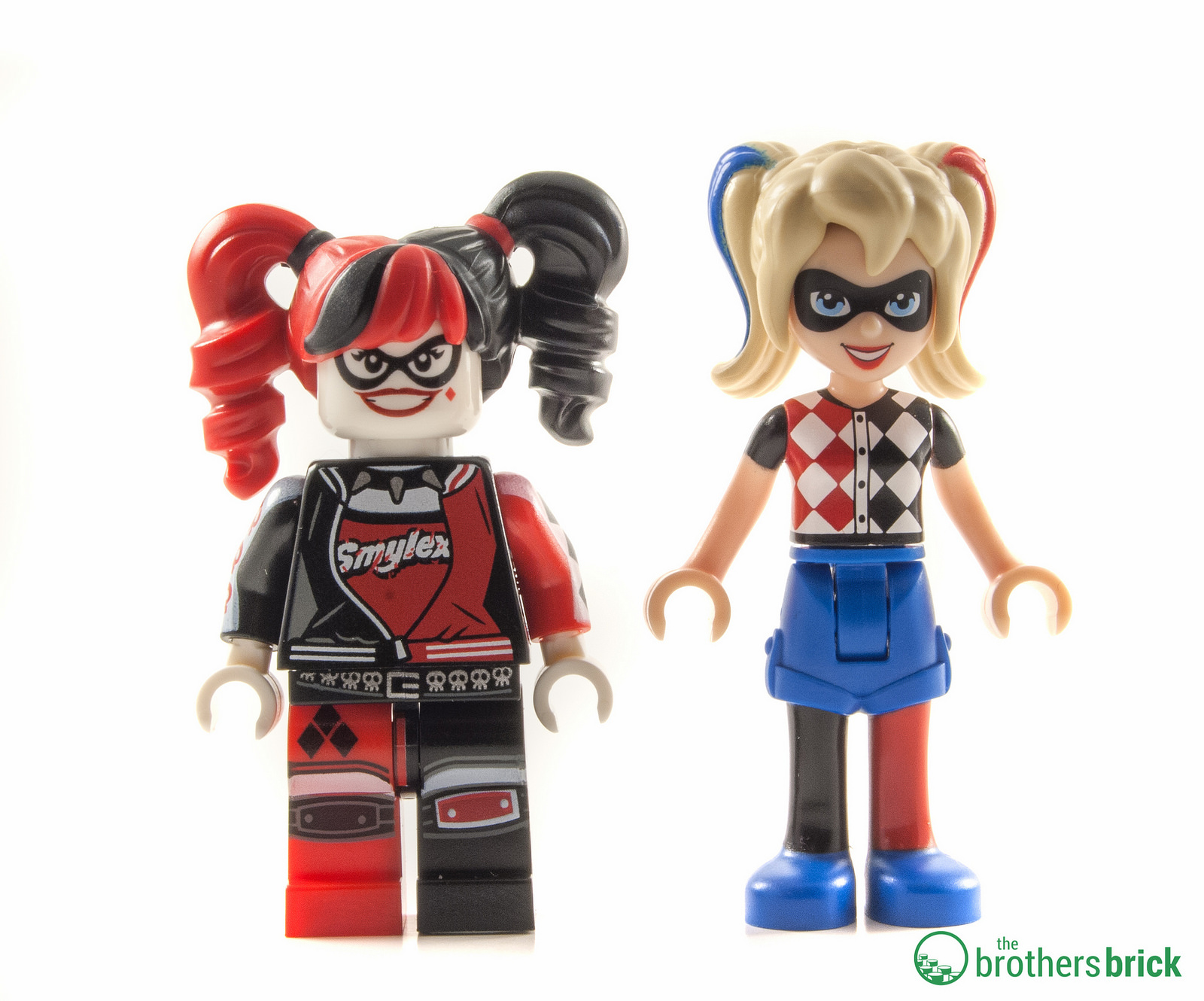 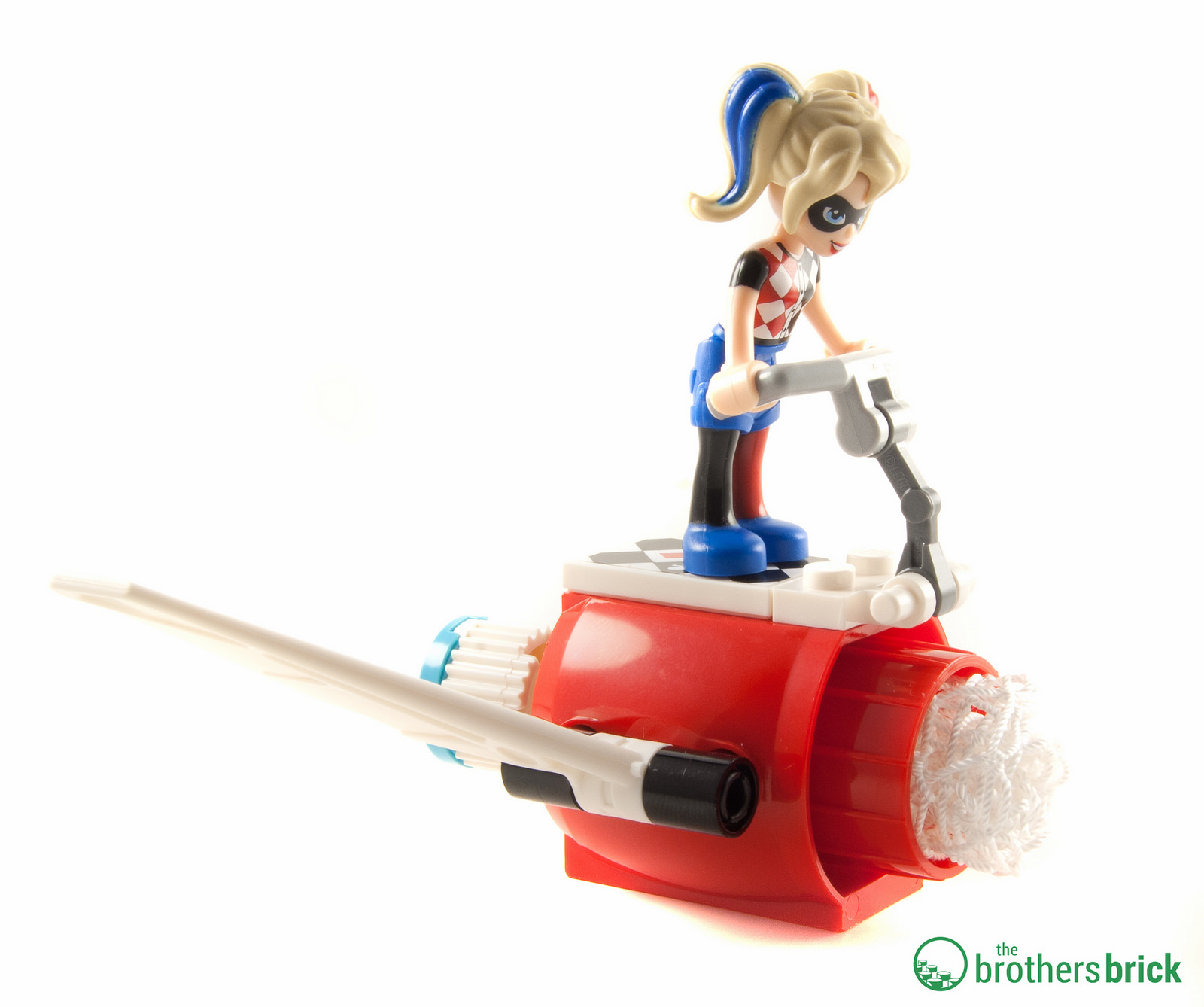 Harley’s flying contraption is simple; a bright red engine with wings and a place for her to stand. It flings a net to catch the Kryptomites. The store front is just that: a window and a door, with a bit of plate inside to put a booth to grab pizza after all that saving business. The coffee shop and espresso machine is on the top floor, with the cupcake flinging catapult. The window is pushed out by pressing in the BAM tile. 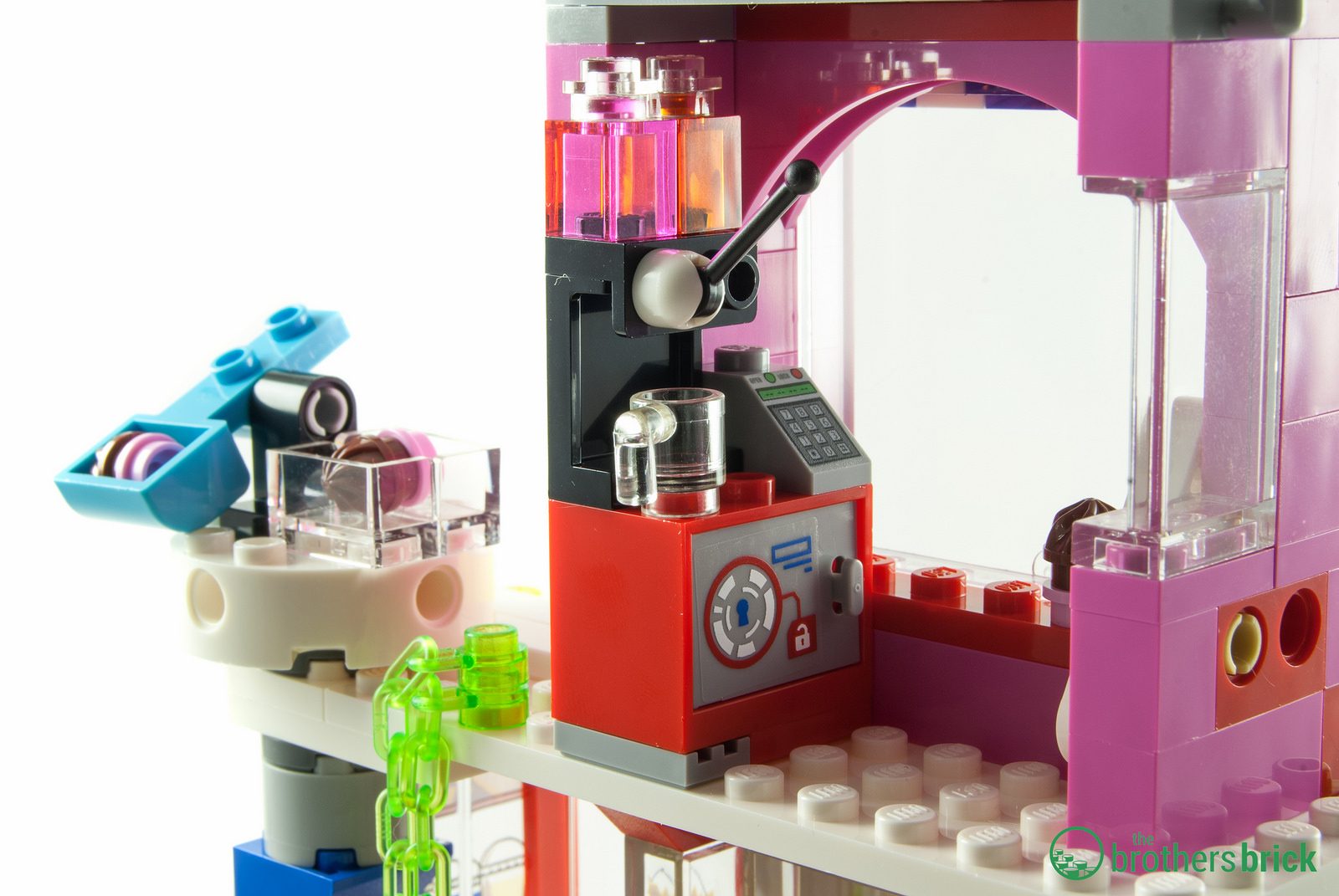 The bottom half of the store front is more interesting, and I like the color choices. The upper portion seems like it’s a random afterthought with it being bright pink. The catapult adds very little and seems out of place here. I understand the need for them in Castle sets; in a cafe it feels tacked on. 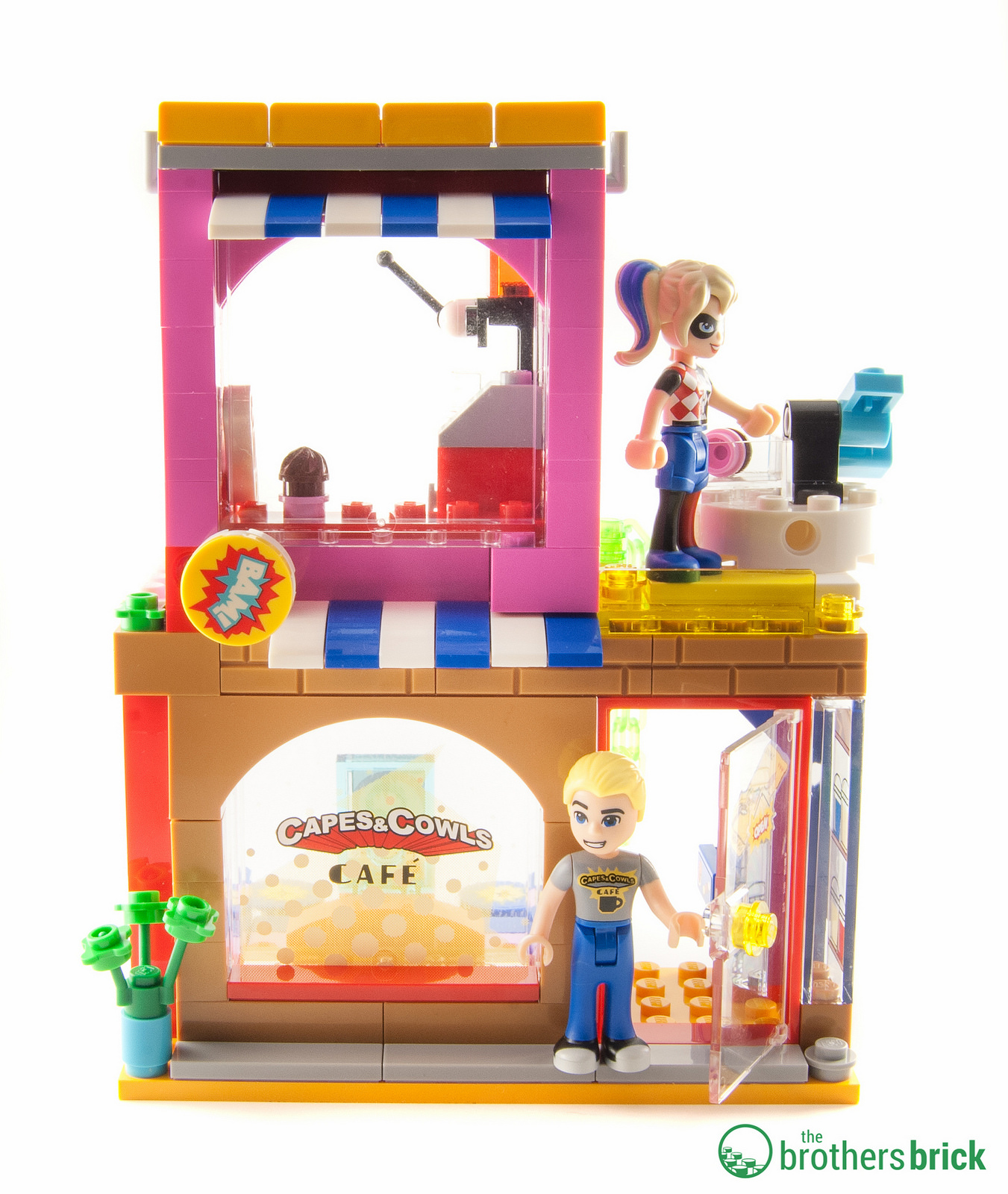 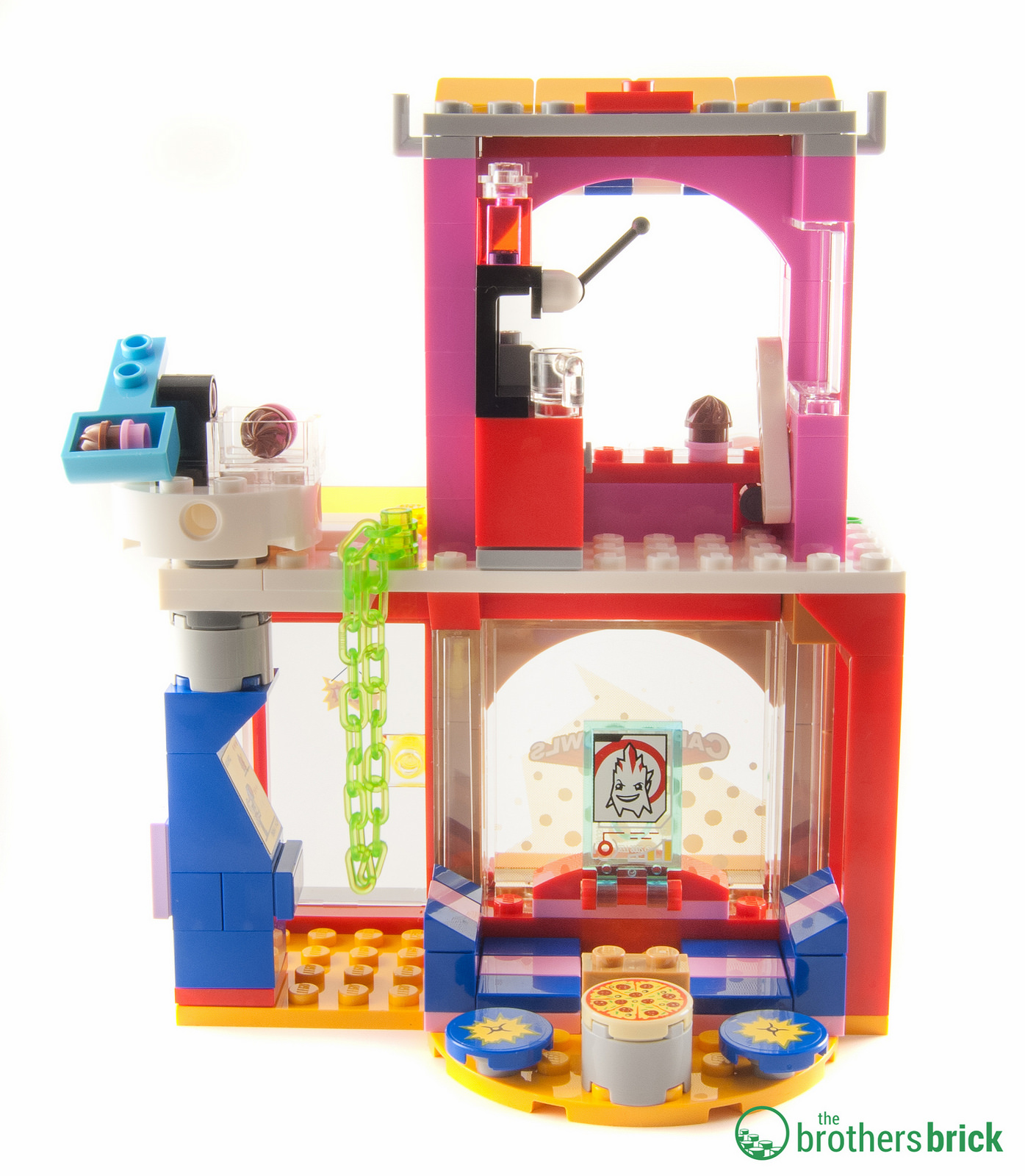 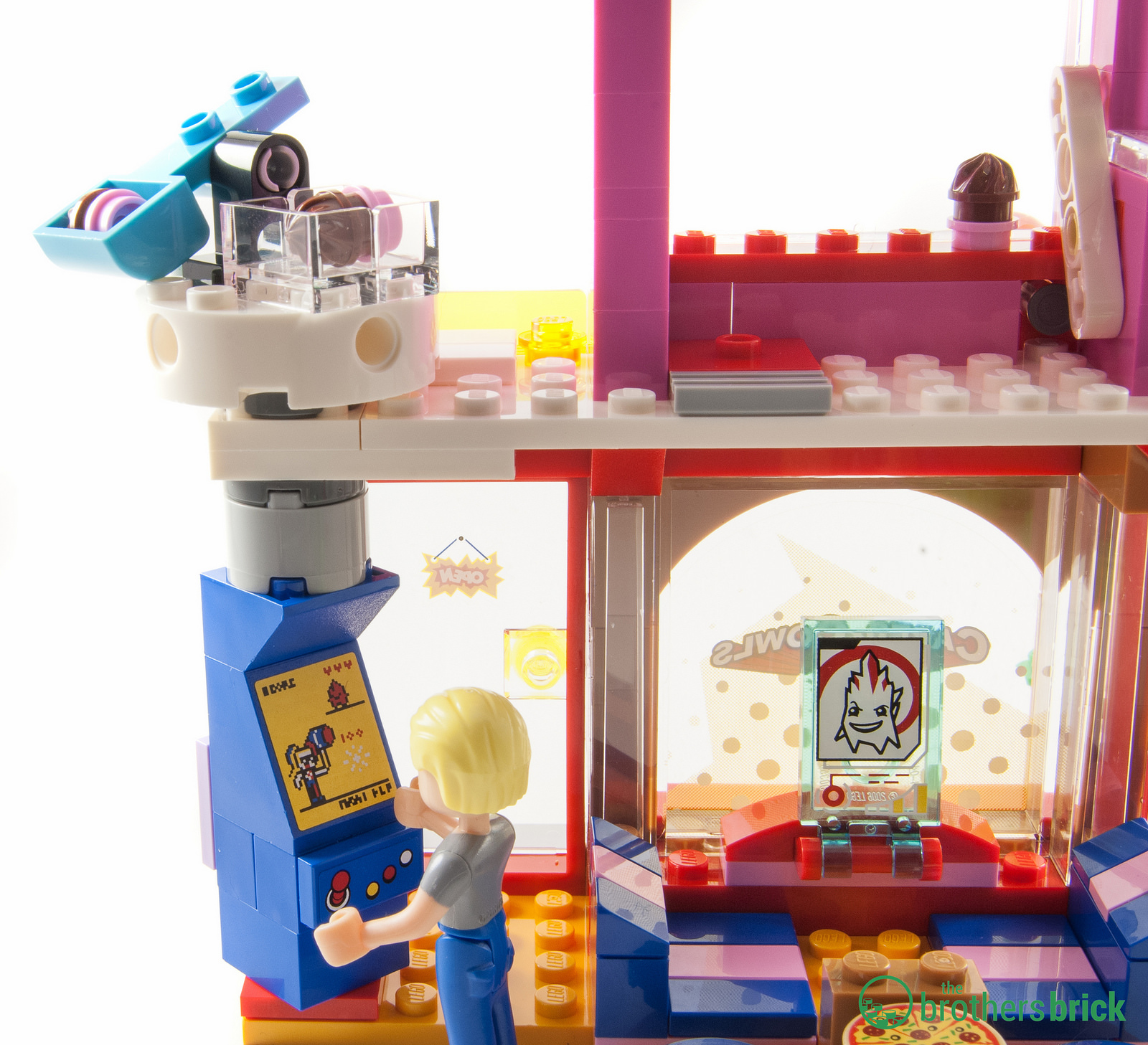 The arcade game is a simple design. I am disappointed they didn’t go for the same design as 75827 Ghostbusters Firehouse Headquarters. The Ghostbusters one has nice detail to it, along with some nice techniques, where this one is simple stacked brick for the most part. I do like the comic book tile addition, however.

This set, like the previous one, also has a fair number of stickers. The BAM tile and the comic book tile, along with the Kyprtomite faces are the only printed parts. Of particular frustration is the fact the stickers are mostly clear, which always seem to catch all the dirt specs no matter what precautions you take, and show tiny bubbles easily.

With the higher price point of the two sets for effectively the same amount of pieces and a less interesting model, I’d recommend waiting to catch this one on sale, and with the frequency of discounts Amazon seems to be posting, you may not have long to wait. And for those of you who are Harley Quinn fans, this is currently the only way to get the mini-doll version of her, so it may be worth springing for the set at full price.

This set is available both on The LEGO Shop and Amazon. 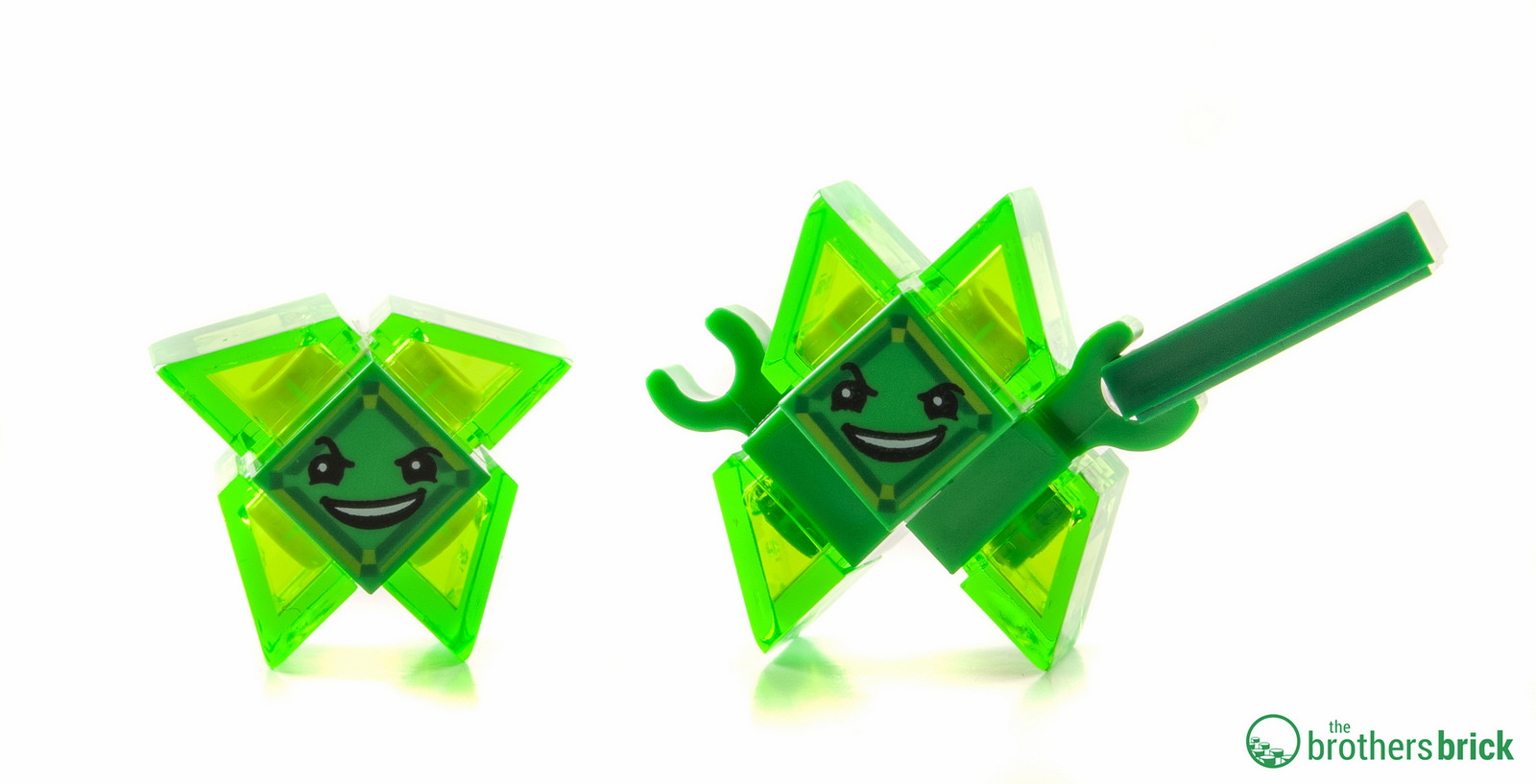