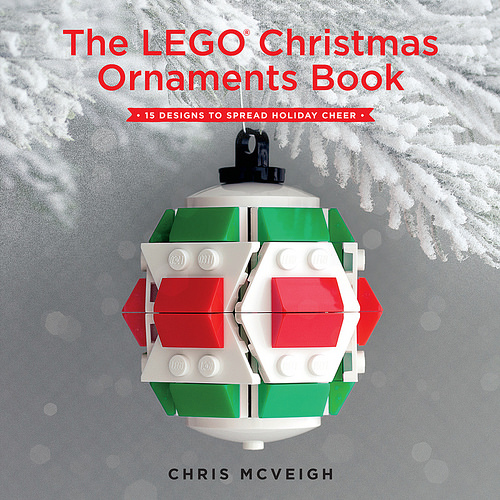 No Starch released the book back in September, but between a lengthy overseas trip for work followed by BrickCon, I simply dropped the ball — my sincerest apologies to Chris and our friends at No Starch for the delay. But the good news is that it’s now officially the Christmas season, so I guess this is even more timely? Enough excuses. On to the interview!

The Brothers Brick: We first featured you here on The Brothers Brick way back in 2008, when you were taking pictures of chipmunks with action figures. When did you start focusing more exclusively on LEGO?

Chris McVeigh: It happened rather quickly! Pairing Star Wars action figures and chipmunks was a fun challenge, and it motivated me to do more photography of action figures and other toys. Unfortunately, Hasbro wasn’t producing any play sets (aside from large ships), so it fell to me to create my own sets and backdrops for action figure photos. This was a rather time-consuming task that ultimately prevented me from getting on with toy photography. 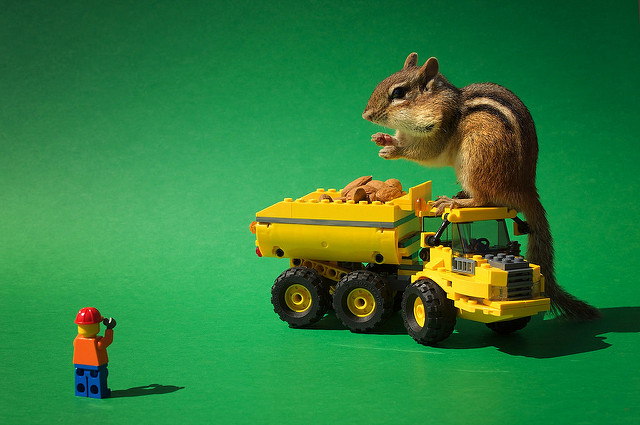 Around about that time, I’d emerged from my dark ages and was buying more and more LEGO. It wasn’t long before I started pointing the camera at minifigures – they’d changed so much since I was a kid! – and I started to come up with comical ideas for minifig photos. 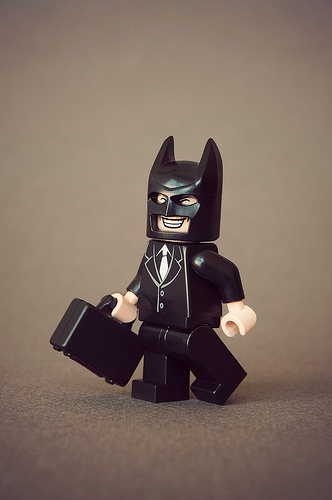 And like action figure photography, some of my ideas required fully constructed environments to set the scene. Happily, LEGO provided an in-universe solution: if I needed a starship corridor, I could build a starship corridor! It’s perhaps silly in retrospect, but rediscovering that I could make anything I wanted out of LEGO was incredibly enabling. So, I set aside the glue, foam board, balsa wood and paint, and by 2010 focused almost exclusively on LEGO. 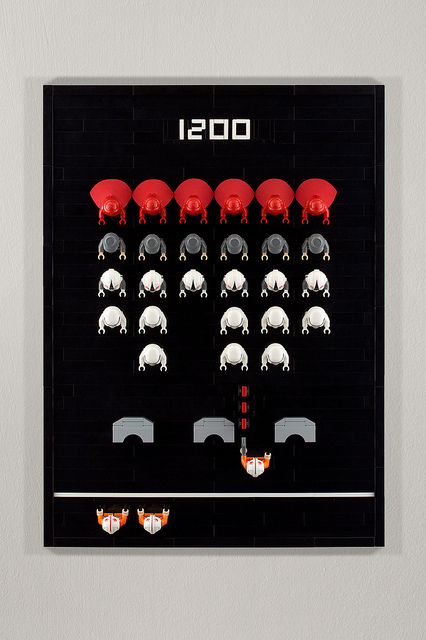 TBB: What inspired your LEGO christmas ornaments, and which one is your personal favorite? Do you have a Star Wars themed Christmas tree decorated with your own LEGO ornaments?

CM: Christmas has always been a very big deal in my family, and I suppose I always liked the pairing of Christmas and LEGO. But it was actually Thomas Oechsner’s wonderful spherical vehicles that inspired me. In 2010, I reversed engineered the sphere technique from his photos (a technique I later learned was pioneered by Bruce Lowell!) and adapted the design into a simple ornament. I guess that’s when the gears started turning— it wasn’t long before I decided I’d develop additional models and publish building guides. So November 2010, I debuted three builds: a round ornament, Santa’s sleigh and a Christmas tree with presents. And here we are, seven years later! 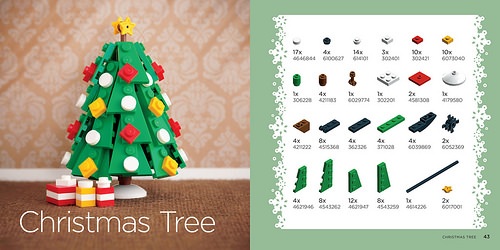 Although this may seem odd, I’ll confess that my ornaments rarely make it on my own tree. Instead, I take a collection of my ornaments with me when I travel home for Christmas, and put them on my mom’s Christmas trees. (Yep, she has two!)

As for a favourite ornament, well, that’s an easy one! I love this year’s new Gourmet Burger ornament because it’s just so ridiculous. 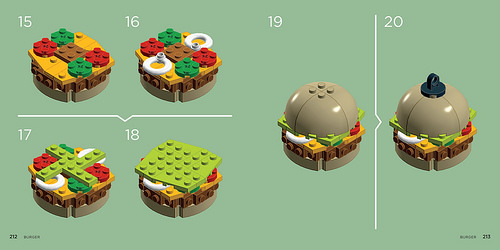 TBB: How early do you start planning the upcoming Christmas ornaments each year?

CM: February or March, actually. It’s a relatively slow period for me, and so I have plenty of time to experiment with new designs. New ornaments (and other new holiday models) are usually finalized in May or June, leaving me some time to tinker with colour variations before I start working on building guides. 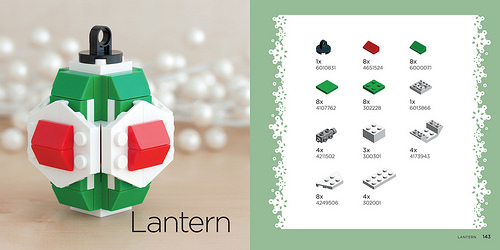 TBB: A lot of your photos look different from the standard model-on-a-plain-background that we see from many LEGO builders. What’s your philosophy on LEGO photography, and how do you go about photographing your creations?

CM: I’ve always found it important to set a scene, to give context and compliment the model. Consider the photo I took for my 70s Radio – I wanted it to feel like it was a sunny morning, light beaming through the kitchen, smell of coffee in the air, and perhaps Seals & Crofts’ “Summer Breeze” is playing on the radio. Interpretation is selective, of course; if you look at the photo and think of Twisted Sister’s “We’re Not Gonna Take It” playing in the late afternoon, that’s good too! The important thing is that the scene evokes a memory. 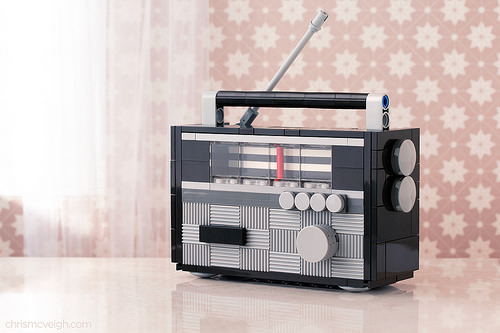 TBB: We’ve noticed a strong correlation between having a day job as a designer and being a really strong LEGO builder and photographer. How has your work as a designer affected your work with LEGO?

CM: I think it has. In design, I’ve always tended towards simple lines, limited colour palettes, and minimalism, and I think this shows in a lot of my work. 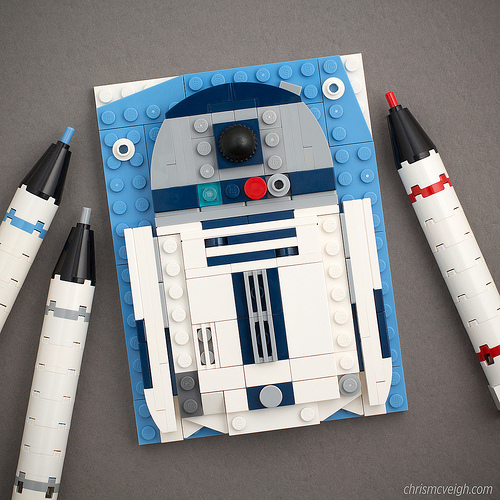 That said, I find that I struggle with visually dense scenes, and so I’ve made an effort in recent years to up my game in that regard. (Outbreak, featuring a hazmat-wearing minifigure running away from a horde of zombies, is probably my most successful such photo) 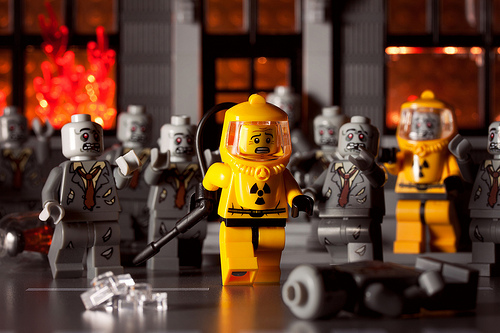 TBB: Your creations come in many different scales — life-size, minifig, micro, and everything in between. How do you decide what scale you want to build a particular model in? 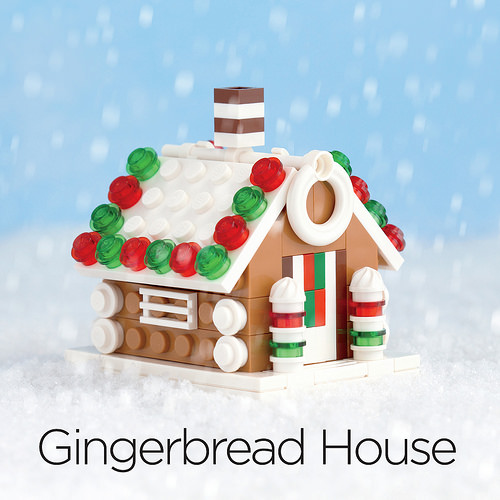 CM: The scale I choose is often decided by the size of an ideal part. For example, the scale of my television and computer models are based around the 1×4 bow used for the screens. 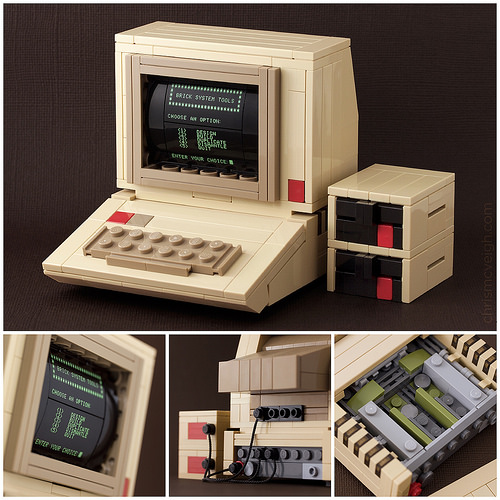 Interestingly, I sometimes feel more accomplished when I work at smaller scales, perhaps because of the effort required to infuse a small model with a good amount of detail.

TBB: How long do you generally spend designing a creation? Do you revise designs a lot, or do you usually get what you’re going for in the first shot?

CM: Most of my bigger builds are done over the course of a week or two. I’ll sort out the framing and general scale the first day, and if I’m lucky, I’ll have a rough model complete by the third day. I then tend to let the dust settle a bit before I tackle revisions, so that I can come back to the model with fresh ideas. And there are always revisions, tidying up details here and there, swapping in different parts, and so forth. Ornaments actually see more revisions than most models – just last week I completely overhauled a design I thought I’d finalized in May. 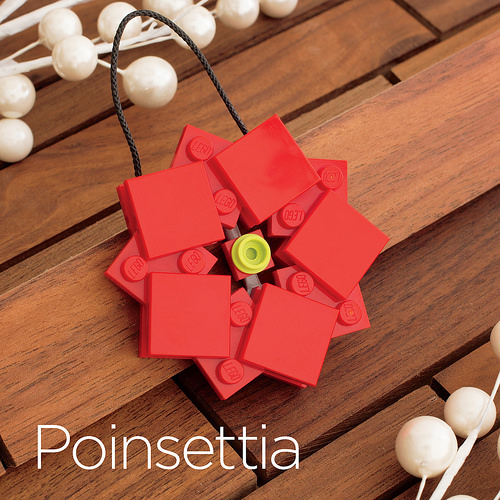 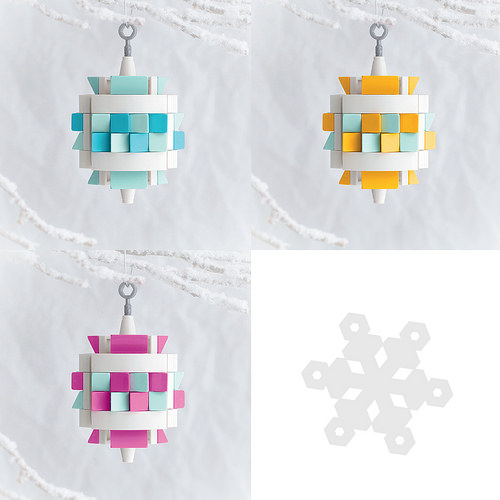 Thanks to Chris for an excellent — and much-delayed! — interview. You can check out more of Chris’s LEGO creations on Flickr, and you can download instructions and buy custom kits from ChrisMcVeigh.com.

Here are a couple more spreads No Starch shared from The LEGO Christmas Ornaments Book (currently just $13.12 on Amazon.com). 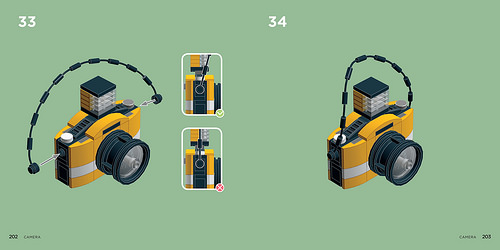 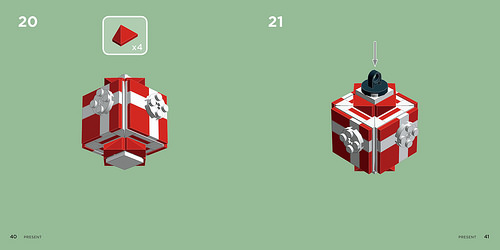