Back in March, LEGO announced that the next LEGO Ideas set would be 21307 Caterham Seven 620R, designed by Carl Greatrix. Just released this month, we’re pleased to bring our readers a full hands-on review. 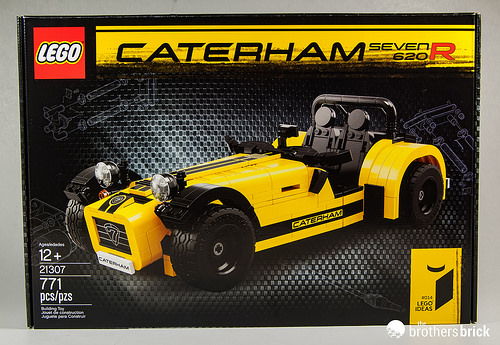 This is quite a lovely set with some great parts — both brand new molds and recolored existing parts. Read our full review, but we think you’ll like this set as much as we do.

As with other LEGO Ideas sets, the Caterham Seven comes in a sturdy storage box, and the instruction booklet includes details about the real-life vehicle, a profile of Carl Greatrix, and some words from Henrik Andersen, the LEGO Designer Carl worked with to take his Ideas design through to a product design. The booklet is 190 pages long, and spans 237 steps. 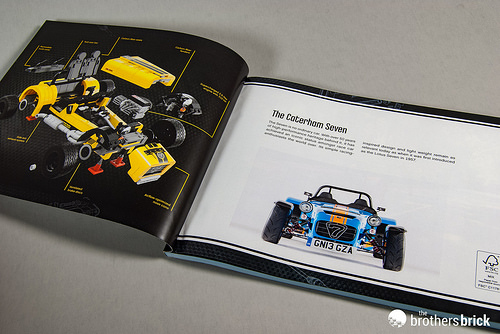 The parts come in three numbered bags, and I was able to build the set with the box as my parts bin — always a nice feature for LEGO builders with limited build space, or those of us who take LEGO to work, on business trips, and everywhere else we go.

The build begins with four jack stands so you can play mechanic and swap out the car’s tires. 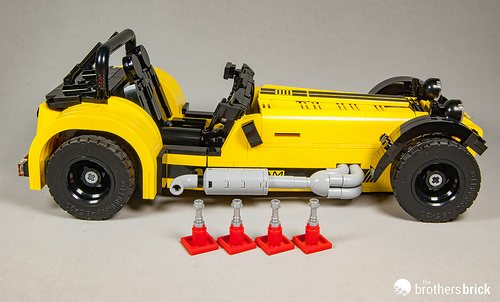 Building someone else’s design is always an opportunity to learn new techniques and parts usages. I think it says a lot about the progress that LEGO set designs have made over the past 10 years that the build itself — as enjoyable as it is — didn’t feel more challenging or innovative than many of the other LEGO Ideas and Creator/Expert sets designed by talented LEGO builders hired by the company, like Jamie Berard, Mark Stafford, Marcos Bessa, and Mike Psiaki. In fact, Carl himself works as a professional LEGO designer for TT Games — hired after he saw a job ad we posted right here on TBB.

But I did run into a surprise as early as step 27, when I saw that the disc brakes behind the wheels are printed! In fact, there isn’t a sticker sheet in the set; every single stripe, “7”, and “Caterham” is printed. 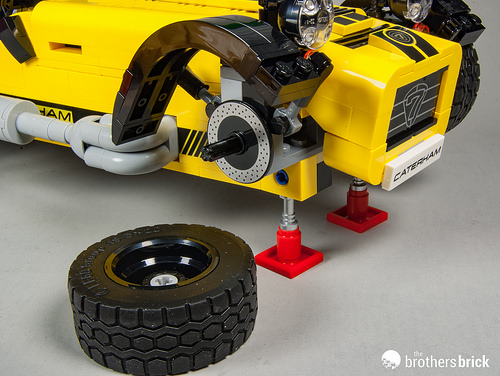 The second bag begins on step 71 with the removable engine, which also has a printed tile. 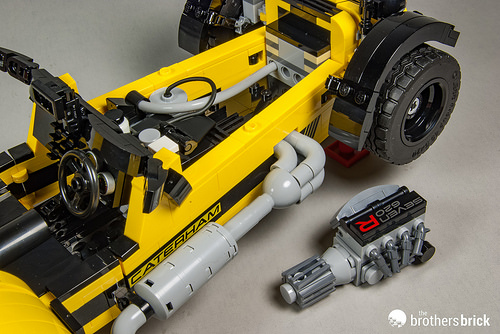 The bucket seats are also removable. 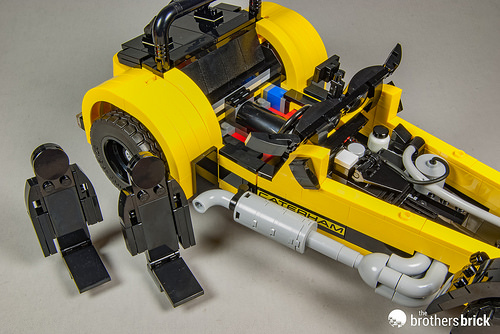 The sub-assemblies for the front bumpers use some interesting connections, with clips holding the curved sections out over the tires. 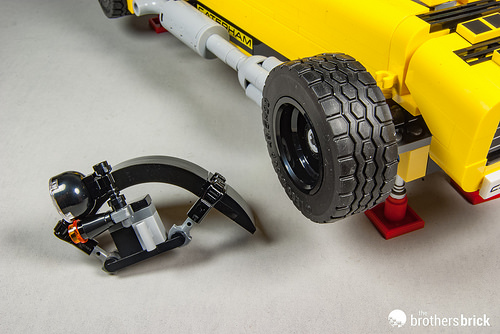 The entire front two thirds of the car narrows from 10 studs wide to 6 studs wide, with the hood/bonnet in the third bag also angling (by way of hinges) to match. 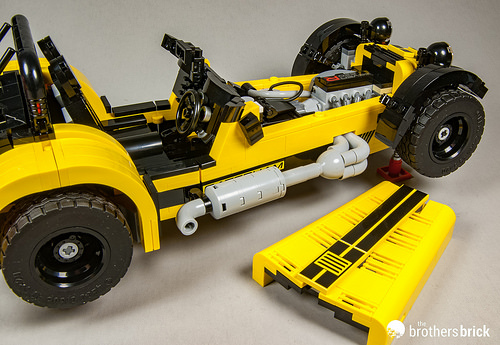 One especially innovative part usage is the way the exhaust connects to the muffler. Yup, those are LEGO Friends lipstick pieces. They keep the round Technic connectors from rattling around between the “macaroni” pieces and the lower half of the balloon that funnels back to the muffler. (We’ll come back to all the great new parts in this photo later.) 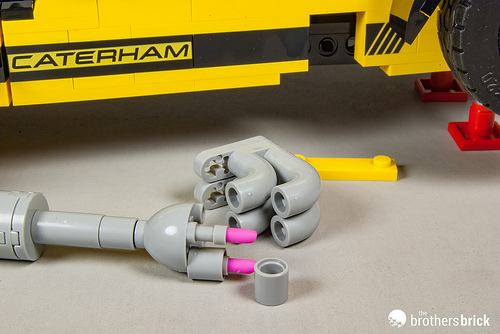 The third bag adds most of the visible exterior, from the car’s nose and hood/bonnet to the rear trunk/boot. 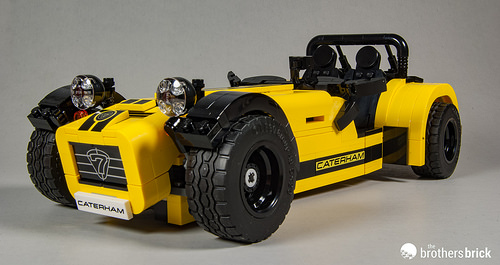 The scale is a bit larger than the LEGO Creator series of vehicles (the VW Camper Van, Mini Cooper, and VW Beetle), but that has enabled LEGO to retain much of Carl’s original LEGO Caterham design.

The model doesn’t skimp on details even at the rear (a perennial weak spot in LEGO set designs). 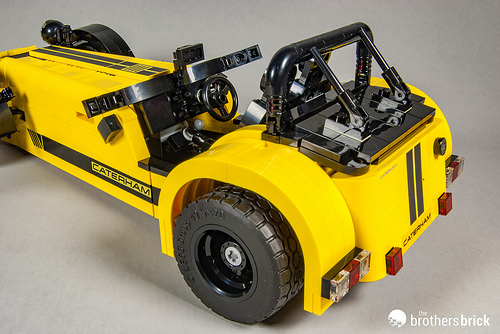 The cover of the trunk/boot is removable, and you can store those jacks there and let them rattle around as you fly around the track. 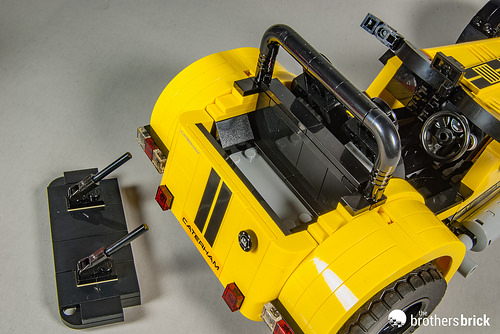 My one nitpick about the design applies as equally to Carl’s pre-Ideas design. The real-life Caterham has a smoothly curved hood, with a prominent stripe down the center. Carl uses tiles to replicate this look in LEGO, and the tiles also serve a structural purpose by hiding the gap between the left and right halves of the hinged structure underneath. It’s a great technical solution in LEGO, but the use of tiles that sit above the overall curve doesn’t quite match the real thing. This is most evident in the front view, where the stripe tiles stand up from the hood, further broken up by the grills/vents toward the front. 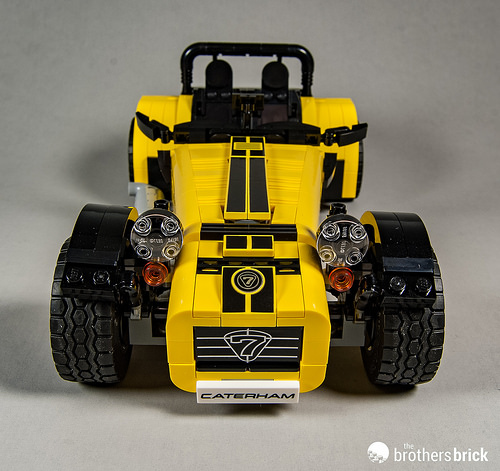 Nevertheless, that’s looking pretty hard for something to criticize, and the overall model is excellent from front to back. 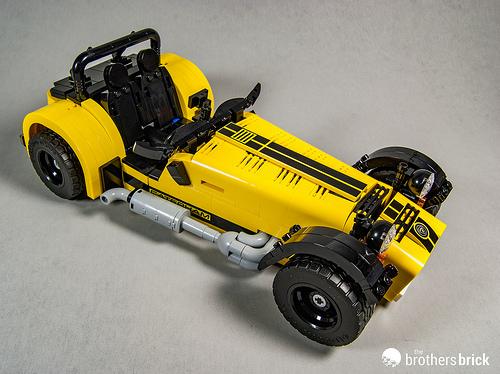 I’ve mentioned a few of the play features, but here’s the full list:

The most noteworthy new part in this set is the 2×3 tile, in both yellow and black (also available in some other colors in some of the new Star Wars Rogue One LEGO sets). 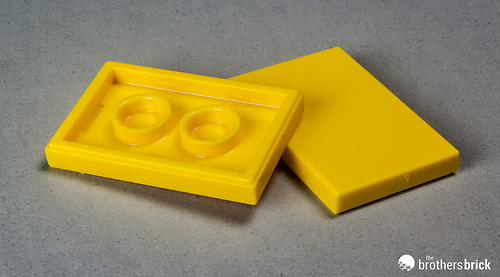 This 2×4 plate with Technic pin holes will come in handy. 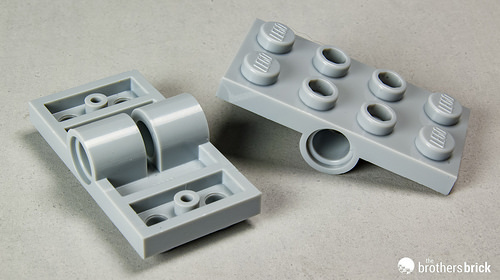 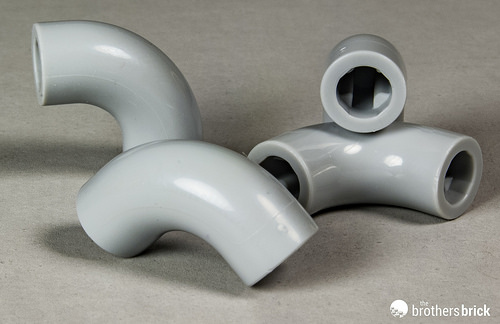 Other new or interesting pieces include 1×1 round plates with bar in black, a 2×2 round brick inverted dome (balloon bottom), and bar 2L with towbar in dark bluish gray. The set also includes pneumatic tube in light bluish gray — a fairly rare part. And don’t forget all those printed parts — we counted twenty, but there could be more we missed.

At $80 USD for 771 pieces, it’s clear you’re paying a bit more for all that printing (and for a new IP license). But this set has some really great parts and good design, and overall it’s a solid value.

Several of us here at The Brothers Brick have built this set since its release a couple weeks ago, and we all love it. Our resident parts monkeys love all the new pieces for a great overall value. For me, this is the kind of set I’d keep together and display at work alongside my other LEGO cars. (It’s also the sort of set I’d get a second copy of for the parts, because LEGO parts monkeys are usually right.)

We definitely recommend this set, and we’re glad to see Carl Greatrix succeed not just as a virtual set designer in video games, but also as a real-life LEGO set designer. It couldn’t happen to a nicer guy.

Read our previous interviews with Carl here on The Brothers Brick: