For more than five decades, the Sikorsky Sea King has been one of great workhorses of the helicopter world. After returning from the Moon, Neal Armstrong, ‘Buzz’ Aldrin and Michael Collins were plucked from the ocean by a Sea King. US Presidents are routinely flown to and from the White House aboard ‘Marine One’, which is usually a Sea King fitted with a VIP interior. 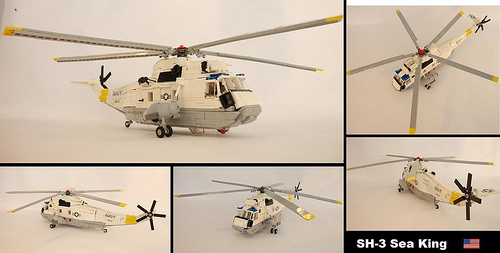 Originally, however, the Sea King was intended as a submarine hunter and the excellent 1/40 scale model built by Maksymilian Majchrzak ( [MAKS] ) represents one of these, as used by the US Navy aboard aircraft carriers in the seventies and eighties. From the sponsons to the five bladed rotors, it’s as close to real thing as you can get using LEGO parts and it looks about perfect from every angle.