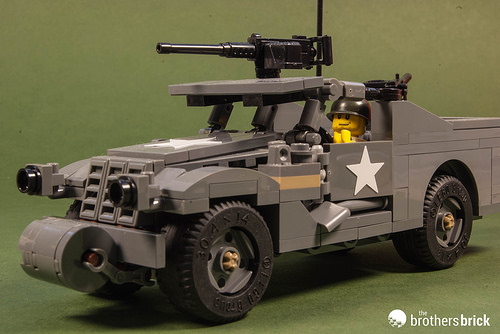 The Brickmania M3A1 Scout Car retails for $135, and includes a custom-printed US infantry minifig and 240 parts (including several custom BrickArms accessories). As I noted in the WC54 ambulance review I linked to above, you’re not buying Brickmania kits to bulk up your parts collection — you’re paying for the cost of designing and producing a small batch of kits whose parts are sourced from the same places other adult LEGO builders get their parts (by parting out LEGO sets and purchasing parts on the secondary market). Given the huge amount of labor involved, $135 for what amounts to a handmade, “artisan” LEGO set makes sense. The minifig alone is worth $20, with $10 in BrickArms weapons (the front-facing .50 caliber M2 Browning and two .30 caliber Browning machine guns). I covered this at length in my earlier reviews, so I won’t belabor the point. 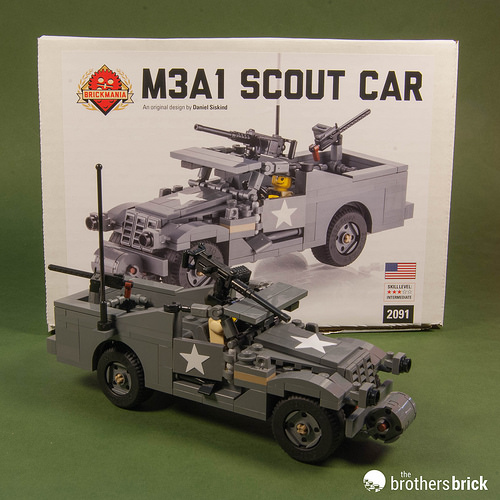 One of the things I truly enjoy about building a LEGO set designed by a fellow adult builder is the opportunity to observe alternate solutions to common problems. You get some sense of this with LEGO Ideas sets, but they’ve been put through the rigorous guidelines and restrictions of the LEGO corporate hive mind. Sanitized, or even mangled in some cases. Not so when you purchase a custom LEGO kit from one of the third-party LEGO retailers like Brickmania. You get the full glory of AFOL (adult fan of LEGO) building techniques, from SNOT to SNIR (studs not in a row, or half-stud offset). Since Dan has been producing custom kits for more than a decade, you also get the benefit of learning from a builder whose full-time job is building with LEGO, without the restrictions and rules imposed on official LEGO set designers.

As I began building the chassis, the first thing I noticed about Dan’s M3A1 Scout Car is that it’s an odd-width vehicle. The chassis is three studs wide, and the overall vehicle is seven studs wide — the same dimensions as my own Scout Car. 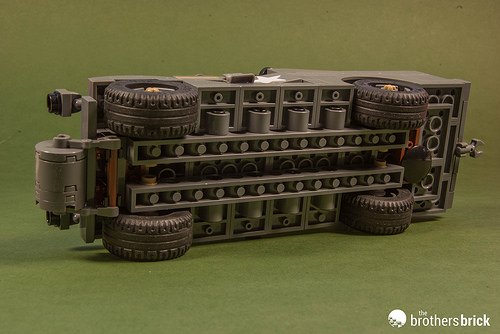 One technique I’ve literally never encountered before is placing a LEGO plate across a gap at two different levels, creating a slope. In other words, the plate is attached at an angle, without using hinges or clips. Given that the difference in height is only one plate, and the length is five studs, it’s a surprisingly secure connection. This gives the front hood a gentle slope, and the gap on the sides is hidden behind gas cans. 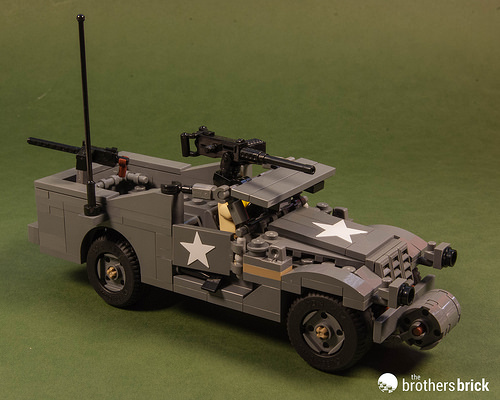 While the overall length and width of the Brickmania kit and my own design are identical, and the rear hulls are similar, everything from the doors forward uses completely different build solutions.

My armored windscreen cover uses extremely rare flags that only came in light bluish gray in one set, and only appears on Bricklink rarely. I prefer my design, but using three such rare pieces isn’t especially feasible in a batch of fifty to a hundred sets. The front fenders are much more angled and open on mine, to match the design I used for my M3 Half-track (built way back in 2010). Dan’s Scout Car has more enclosed wheel wells with a rounded top that takes advantage of a part that wasn’t available six years ago. 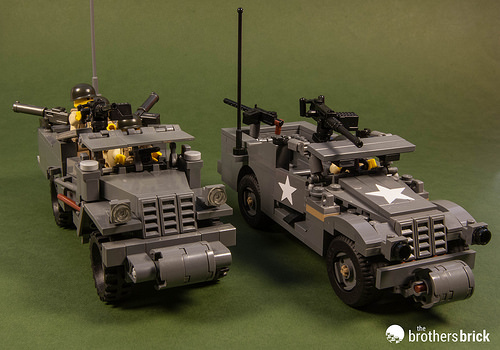 Thanks to some more economical techniques than in my version, the driver and passenger in Dan’s Scout Car sit lower in the cab, and there’s more room in the rear. 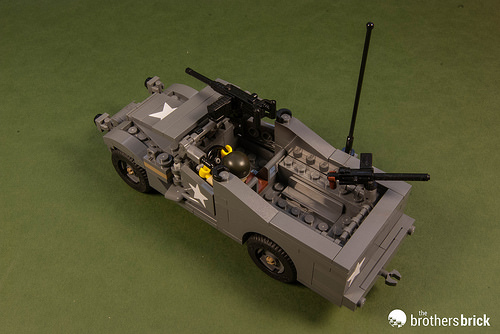 The vehicle’s small size doesn’t sacrifice play features or interior details, with doors that open and a steering wheel that doesn’t get in the way of the gorgeous minifig that comes with the kit. 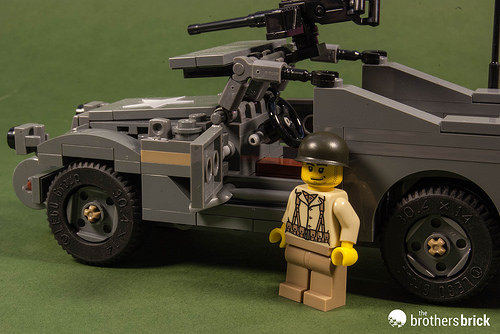 In several of my previous reviews, I’ve said that I’ve preferred my own design because I was able to sacrifice play features in favor of a more compact scale and I could use rarer parts. But with all the right play features, interesting techniques (like that sloped hood), and great accessories (especially the fantastic custom pad-printed minifig), I actually prefer this Brickmania kit to my own custom model. I have yet to be disappointed by a Brickmania kit, and I heartily recommend the M3A1 Scout Car.