LEGO recently invited The Brothers Brick to their headquarters in Billund, Denmark, along with various other fan-run online groups, websites, and print media about LEGO. I was the lucky guy who got to on behalf of the Brothers Brick.

In our lives we all play a variety of roles, often without thinking. A list of mine would include (mad) physicist, prematurely grey and pasty white Dutchman, university lecturer and, of course, one of The Brothers Brick and Adult Fan Of LEGO. In the last few days, at least two new roles were added: reporter and interviewer. This is one of those occasions were being European, or more precisely, in Europe was an advantage. I’d been to Denmark once before, on a beer-fuelled student trip to Copenhagen 20 years ago, but this was going to be very different and, dare I say it, even more fun. 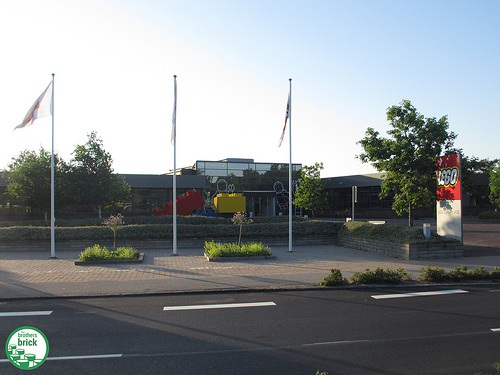 I arrived in Billund early in the evening on Wednesday and quickly realized that everything in this town revolves around LEGO. I passed the entrance to LEGOLAND on the way to my hotel, which was next to the LEGOLAND Village and, according to a sign on the door, was guarded by LEGO Security. No, really! After some dinner (no LEGO in that, fortunately) I took a stroll to see where I was expected the next morning, past the LEGOLAnD hotel to reach the LEGO Systems’ headquarters. Billund is very quiet, green, leafy, tidy and pleasant and it’s considered completely normal to walk around with a LEGO logo on your outfit.

At LEGO HQ the next morning, I introduced myself to our host for the two-day event, Kim Ellekjær Thomsen, who is LEGO’s Associate Community Manager and who was a Star Wars moderator for Eurobricks before joining the company. I also met the other guys; fans from the US, Poland, Portugal, Sweden, Spain and the UK. Things were off to a rocking start when we were handed goodie bags with a copy of the brand-new Ghostbusters Ecto 1&2 set, which I will be reviewing sometime in the next few days. After introductions, a friendly discussion and lunch, we were off to a busy schedule. First stop: one of LEGO’s factories in Billund. As fans of LEGO, we’ve probably all seen footage of one of these in action, but to see it with your own two eyes is a different matter entirely. Two of the highlights were molding bay 7, where we could see LEGO parts being born and the enormous automated warehouse where the parts that are produced are stored until they are shipped out, mostly to the Czech Republic. Uniquely, we were allowed to take pictures. You don’t get that on the inside tour! 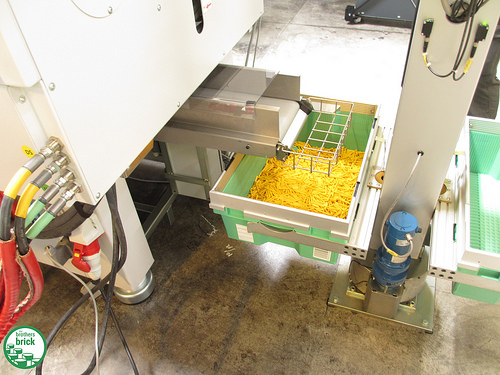 Molding bay 7 was filled with a few dozen machines being fed with melted plastic and steadily cranking out LEGO elements. This process is largely automated, without human hands touching the parts at any stage. In fact, whenever people from quality control take away some of the parts in a batch, the remainder are considered contaminated and the parts end up in a huge recycle bin. LEGO prides itself for only 0.2% of the waste not being recycled and is striving to reduce this number further. Mobile robots drive around to pick up trays with newly-made parts from the machines and to deliver empty ones. I almost expected M-O to show up to remove us as foreign contaminants. 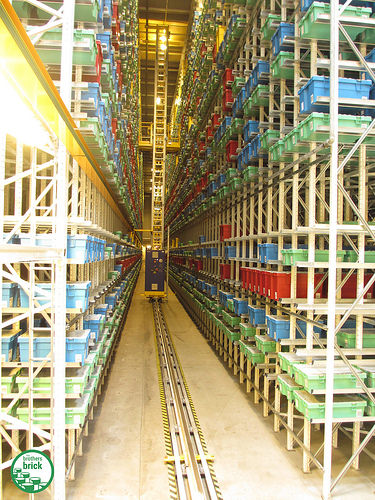 The temporary storage facility is probably best described as a modern LEGO-filled equivalent of the warehouse in Indiana Jones and the Crystal Skull. Racks filled with boxes of virgin LEGO parts reach as far and high as the eye can see and my pictures sadly don’t really do it justice. After the factory visit we went on a shopping spree in LEGO’s staff shop and then on to another highlight: the LEGO Idea house. This is built around the house where Ole Kirk Kristiansen, LEGO’s founder, used to live and includes a private museum about LEGO, which houses treasures such as the wooden sign with “Det bedste er ikke for godt”. This motto doesn’t translate perfectly to English, but is usually translated as “Only the best is good enough”. The museum also has early hand-operated molding machines and the 1959 Danish patent for the 2×4 brick. 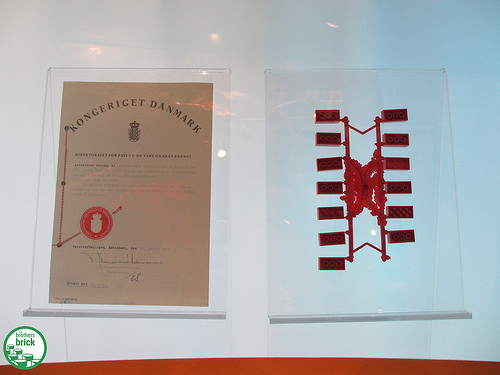 In the basement of the house we visited one of the vaults where LEGO stores examples of almost all the sets they have produced over the years. Here I briefly turned from an amateur reporter into a ten-year-old boy, when I saw LEGO set 5580, Highway Rig. This is the set that cemented my love for building vehicles and it is still awesome. 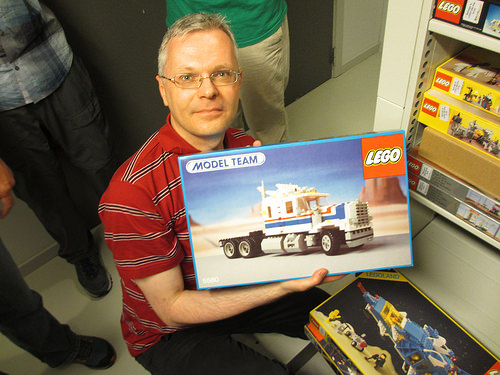 This amazing visit was followed by a very pleasant dinner in a local restaurant and, a bit later in the evening, most of us got together in a cabin in the LEGOLAND Village for a few beers and lots of talk about LEGO.

The next day was filled with interviews, including one with Technic designer Milan Reindl and Andy Woodman, who is the senior design manager for LEGO Technic, of course about Technic, the new Porsche 911 GT3 RS and on what it takes to be designer. I also talked to Hasan Jensen and Paiva S. Naldal from LEGO Ideas, about what is needed for an Ideas project to be successful. Expect reports on these and more interviews in the next few weeks. Everybody I talked to is a fellow enthusiast and, despite my trepidations about becoming an interviewer, it was great fun. I’m also not quite so pasty white any more. I turned a bit pink, because Kim even arranged for the sun to shine. 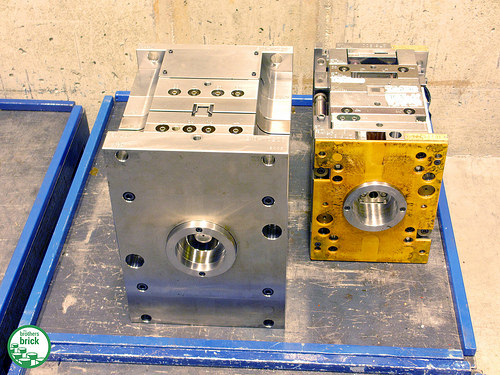 On Saturday I flew home, after a big fight to get all the LEGO I got and bought into my suitcase and spending more money at the LEGO store at the airport, which required repacking my hand luggage to find space. Mental note: take a larger suitcase next time. I’d like to say thanks to our host Kim and to all the other wonderfully welcoming people at LEGO, to the other fans at the event and, of course, to my fellow Brothers Brick for granting me the opportunity to represent them. I had a ball.