Long before Elektra and Black Widow, there was Princess Diana of Themyscira, better known as Wonder Woman. She was created in the 40s and started out fighting Axis military forces, before taking on gods from Greek mythology. A television icon in the late 70s, she’s finally getting her own movie in 2017. And why not? She’s awesome! So is this poseable figurine from Victor. The model uses a mix of Technic parts, System bricks, and Bionicle armor to create layers of texture which strike a perfect balance of toughness and femininity. The builder has chosen to arm her with a sword and shield instead of the better-known Lasso of Truth, but he has included a scale model of her Invisible Jet. 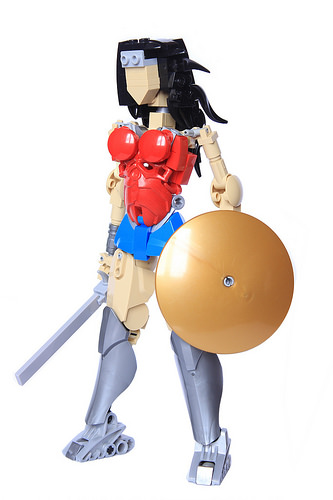