The military use of Unmanned Aerial Vehicles, popularly known as drones, goes back to WW2. As long ago as the Vietnam War, the USAF used versions of the Firebee UAV for dangerous reconnaissance missions over the North. In recent years, military drones have been used for surveillance as well as for controversial targeted killings, typically with relatively slow and high-flying machines against adversaries that don’t have meaningful air defences. These machines are not yet a viable replacement for a full blown jet fighter. The Peregrine, built by Stijn van der Laan (Red Spacecat), offers a glimpse of what a future unmanned combat aircraft may look like, if done up in a particularly snazzy colour scheme. 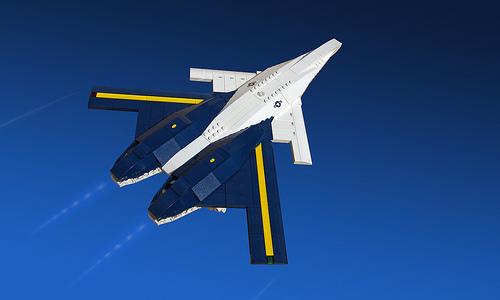 The way the wings and canard foreplanes are angled makes the model look super sleek and I love how the wedges used to build the engine nacelles and the forward fuselage interlock. More angles can be seen in Stijn’s flickr Album.

1 comment on “The Peregrine is a drone that looks killer”