This month’s issue of Blocks magazine pits Captain America against Iron Man, as six brilliant builds go head-to-head in the superhero showdown of the century. Continuing the Marvel-lous theme, Daniel Konstanski dissects every LEGO Quinjet so far, while MOD Squad member Chris Wight demonstrates how to improve the latest version. Civil War movie coverage is rounded out with reviews of the latest sets and an exclusive interview with TT Games head honcho Arthur Parsons, who talks all things LEGO Marvel’s Avengers. 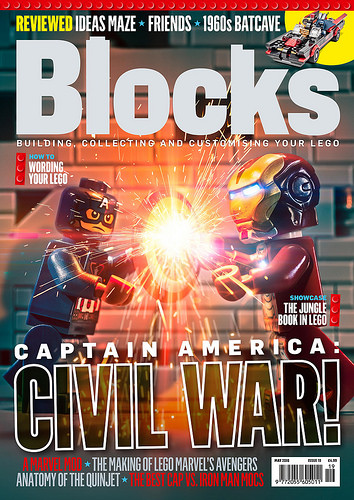 There’s also plenty of non-superhero goodness, including a celebration of the latest movie adaptation of The Jungle Book with a series of exclusive builds. Meanwhile, Minifigs.me’s Nick Savage gives advice on starting your own LEGO business.