By now, everyone is familiar with Ninjago’s new Skybound theme. We’ve already reviewed Zeppelin Raid and Misfortune’s Keep and today, we’d like to share our review of 70604 Tiger Widow Island. The set includes 450 pieces, 5 minifigs, and retails for $49.99. The instructions were clear and easy to follow and, except for the tricky chain connection holding up the “teeth” of the cave, the build was relatively straightforward. 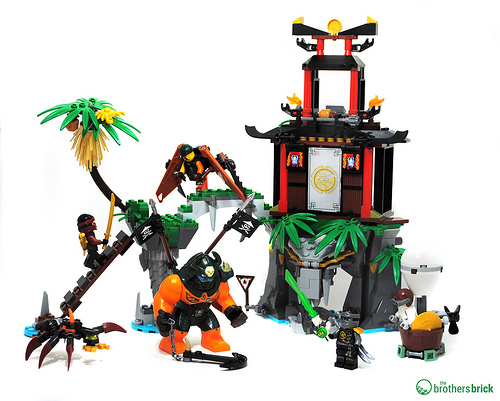 The five minifigures are, from left to right: Dogshank (a powerful female fighter with a unique code of honor), Squiffy (a flying pirate), Sensei Wu (the ninja’s mentor), Cole Bucket (an earth ninja who, after battling an enemy named Morro, became a living ghost. Hence, the green skin-hue.) and Nya Smith (a water-master ninja). 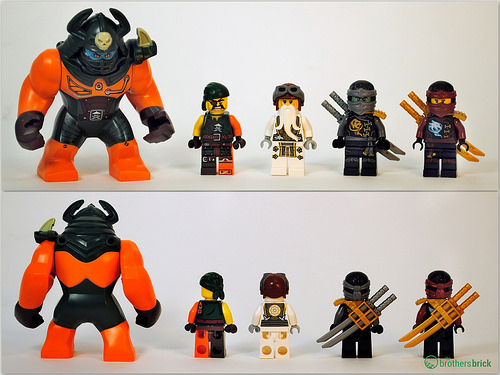 The minifigures have unique outfits and sport printing on both their front and backsides. Cole and Nya each have sweet double Katana scabbards too. I’m a fan of the bad guys’ orange and dark green color scheme and I particularly like that Squiffy’s outfit is non-symmetrical. However, it’s something of a let down that only Cole has more than one expression (especially considering that Nya and Wu’s headpieces would easily cover the unused backside expression), but Cole’s grin is quite endearing. 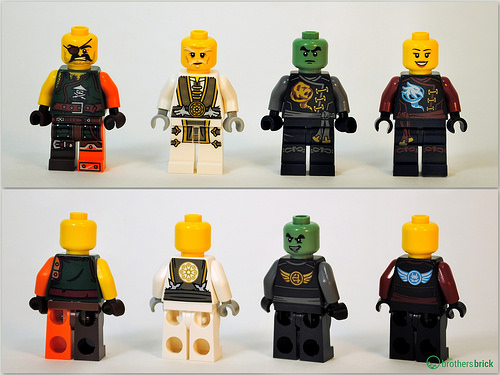 There doesn’t appear to be to ton of new parts in this set, but there are a fair amount of new-ish parts (many of the new parts also appear in 70603 Raid Zepplin.) The most interesting parts are: 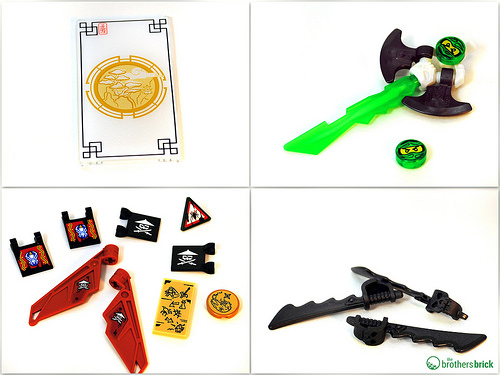 The completed build is sturdy and has a ton of play features, like the ability to drop coconuts from the top of the temple onto unsuspecting baddies, a cave with a lever-operated, teeth-chomping entrance, and a falling palm tree to knock out intruders. Another selling point of this set is the high piece count of plant parts. If you need to expand your LEGO plant collection (like I do), this set is a great opportunity to do so. 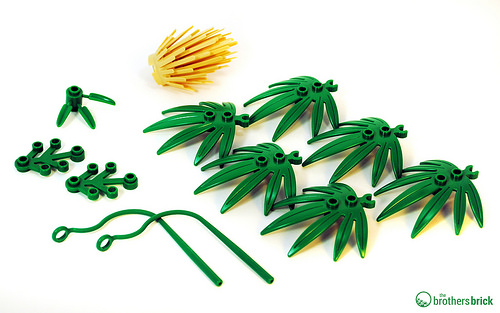 Assuming the standard LEGO pricing of $0.10 per piece and $3-4 per minifig, I’d say this set is reasonably priced. Considering the stylish minifigs, interesting weapons, the beautiful Japanese screen, and the plant pieces, I feel confident recommending this set. Also, if you’re interested in picking up a copy for yourself, you can support TBB by purchasing this set from Amazon.com.

On a side note, while researching the characters, I discovered an awesome coloring book page of this set on LEGO’s website. I’ve already printed one out for myself. Now I just have to find my crayons…