The quote above is from The Picture of Dorian Grey by Oscar Wilde and it’s the epigraph for The Ideal Order, a recently published novel written by Christoph Bartneck. (You can find my review of this book on Goodreads.) The story is centered around the life of a troubled AFOL (Adult Fan of LEGO) named Rob, who, like all builders before him, eventually realizes that his LEGO collection is virtually useless when stored in one big cardboard box and thus sets out on a quest to find (you guessed it) “the ideal order” for sorting his LEGO collection. (Spoiler alert! No such order truly exists.) I sympathize with Rob’s predicament, because I’ve been there. There’s nothing worse than trying to build an old set by fishing pieces out of the rainbow-colored abyss of plastic that is an unsorted box of LEGO. So we sort. 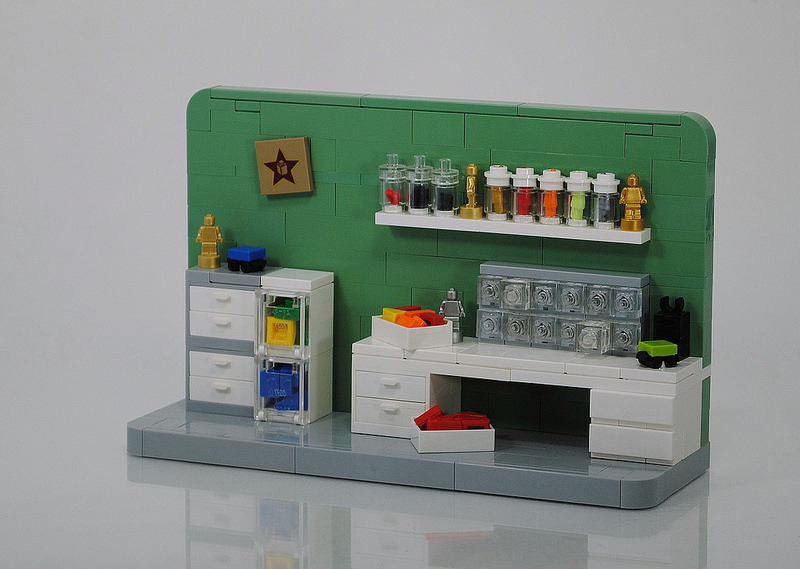 The possibilities are endless when deciding how to sort a LEGO collection and what’s right for one person is not going to be right for another. However, there are certainly some agreed upon standards that most builders share when sorting. For example, sorting by color alone just doesn’t cut it. On the other hand, it’s nearly impossible to have a separate space for each unique piece. So what is the best method?
Honestly, I could’t tell you. If you’re looking for advice on how to approach sorting your collection for the first time, I recommend that you read our prior article on sorting. What I can share with you however, are a few tips to keep your sorting system healthy once you’ve created it. I’ll take a moment to brag now: Excluding the pieces in my works-in-progress, my LEGO collection is 98% sorted at all times. Here’s what my LEGO area currently looks like: 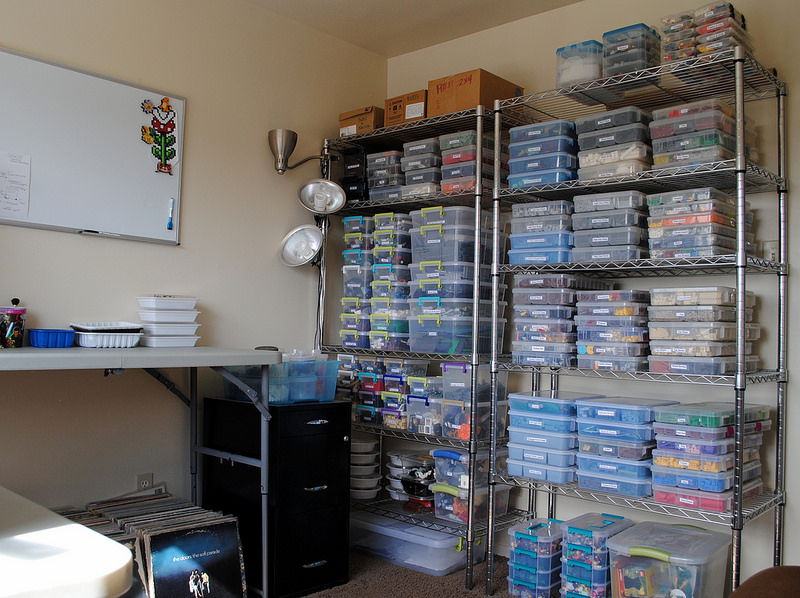 I wasn’t always so organized. Like many of my friends, I used to have huge piles of unsorted brick lying around, making it difficult to work on new builds. For those of you struggling to keep your collection in check (like I was then), here are five tips that I follow now to stay organized and sane.

Tip #1: All the containers!

No matter what brand or style of container you choose for your LEGO collection, you will always need more. Take advantage of pick-a-brick cups, zip-lock baggies, and other free containers. These will tide you over until you can purchase more of your favorite containers. If you look closely in the photo above, you’ll find takeout Chinese food containers, plastic containers for shredded lettuce and vegetables, and even shoe boxes. I’ll sort LEGO bricks into just about anything that has a lid.

Labeling your containers is a huge time saver both when sorting and building. I’m constantly taking containers off the shelf and moving them to my desk. As a result, the containers rarely stay in the same spot for long. If I misplace one, I can do a quick scan and locate it. Labeling also forces you to come up with a single word or phrase that explains every brick inside a container. (ex: Dark Grey Bricks, Weapons, Arches). If you can’t find the similarities between all the pieces inside, you probably need to reconsidered why you sorted them together in the first place. I make my labels by printing out phrases on computer paper, cutting the words out, and scotch-taping them onto both sides of each container. Yes both sides. If you only label one side, you’ll inevitably end up with most of your labels facing the wall. Trust me on this.

Tip #3: Kick that “to-be-sorted-later-bin” to the curb

I know this may sound insane, but believe me, you can survive without your procrastination bin. Here’s how. First, only take apart sets and builds when you have time to completely sort them. It’s tempting to take 1-3 interesting pieces off of that new Star Wars set you just bought and toss the rest into the “to-be-sorted-later-bin.” But the problem with this method is that your “to-be-sorted-later-bin” will almost always remain full, no matter how much work you put into it.  Second, when you are working on a new build and you’re finished for the day, clean your work area by putting any unused brick back into their respective containers rather than leaving them on the table. This prevents any dreaded “cat teeth marks” from appearing on your brick and also cuts back on the amount of sorting you’ll have to do after the build is completed.

If you absolutely must have this kind of bin, then you should at least use a series of “pre-sorted” bins like the ones shown here. The owner of those pre-sorted bins, Adrian Drake, said “That picture shows a pre-sort, where I do a basic sort by element category to get ready to do a finer one – those categories are, among other things: Bricks, plates, technic, slopes, modified bricks, modified plates, minifig stuff, and other. I have over half a million bricks, so I have to, necessarily, have a very granular sorting system or it’d be impossible to find anything.” If you keep your unsorted LEGO in these different categories, you will spend less time actually sorting. After all, it’s much easier to put away all of your modified plates during the course of an afternoon than to just pull parts at random from the big unsorted bin.

Binge watch television, listen to music or even books on tape while you are sorting to get the job done. Setting a thirty minute timer will help you get into the right frame of mind to sort.  There was an interesting quote about sorting in Bartneck’s book that I’d like to share: “I looked at the clutter on the floor, accepted my fate and sat down on the floor. I picked up the bricks and threw them back into their boxes. This task had the right amount of complexity to prevent my mind from having any other thoughts and the progress I made calmed me down. A sense of satisfaction and tranquility emerged from every brick that I threw into the right box.” I often experience this zen-like calm while sorting for long periods of time, but if your experience is less-than-zen, then Netflix will certainly be your best friend.

Tip #5: Don’t be afraid to change your system

A good sorting system must be constantly resorted. It’s never finished. If there’s no room to put more pieces in your existing containers, then it’s impossible to sort. Every time you buy a new set, those containers get a little fuller. At some point, you can’t close the lid anymore and it’s back to Tip #1; more containers. You also know it’s time to change something when you find yourself dumping the same container out on the floor over and over again to find the goodies at the bottom. If you can’t find all the 1×3 plates in the container of multiple-sized plates, perhaps it’s time those 1×3 got a home of there very own.

That’s all I’ve got. I hope it’s helpful. But let me know what tips I should I have included but didn’t. What works best for you when sorting? Do you keep a “to-be-sorted-later” bin? Let us know in the comments section.

8 comments on “To be highly organized is, I should fancy, the object of man’s existence: 5 tips for keeping your LEGO collection sorted [Essay]”