Hot on the heels of Jonas’s pinball machine comes another amazing Lord of the Rings themed game. But this time it’s tabletop football! (Or as we call it in my house, foosball). Balbo, a long-time builder of Lord of the Rings themed LEGO creations, says that he was inspired by the Iron Builder to make a tabletop game of his own. If you look closely, you’ll see that each player is a different character from the film and that the “turf” has mosaics of Bag End, the Black Gate, and the Eye of Sauron. 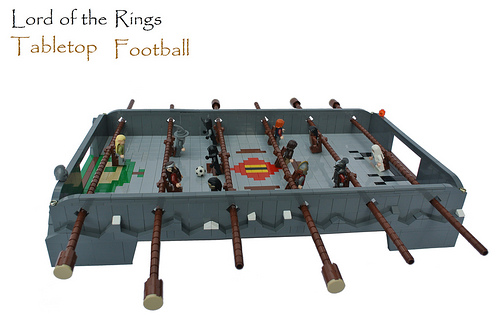 My only concerns with this awesome build would be its durability (foosball games can get pretty heated and I’d hate to see LEGO pieces flying across the room) and the amount of space between characters (especially over the Eye) which could lead to frequent dead balls. But still, I’d love nothing more than seeing Lord Elrond slip a soccer ball past Saruman to end the War of the Ring.

You can check out the rest of Balbo’s awesome LEGO creations on Flickr.

1 comment on “Lord of the Rings foosball: 1st team to 5 points wins the One Ring!”