Happy New Year! LEGO sent us 75827 Ghostbusters Firehouse Headquarters, and I am pleased to end the year by giving you this review. This set, available January 1, 2016, has 4,634 pieces and retails for $349.99. It features the Firehouse and eight minifigures and four small ghost figures, including Slimer. 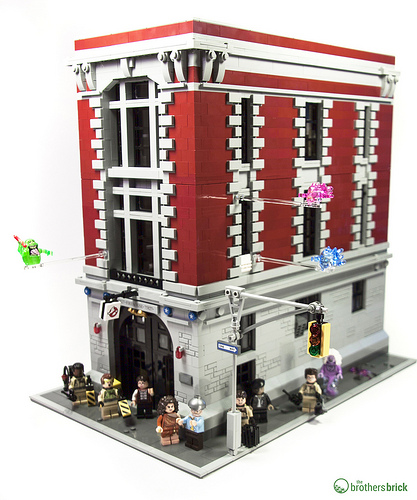 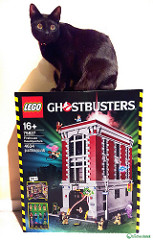 Saying the set is massive is a bit of an understatement. This set has the third most pieces of any LEGO set ever made. To give you an idea, I present you the box with my cat, Athena, for scale. The set features bags numbered 1-14, with an average of 3 bags per number. Make sure you have a garbage can near you during your build process, since disposing of 40 or more plastic bags generates quite the mess.

The instruction manual is lovely and hefty at 418 pages. The opening pages feature a summary of the movie and the importance of the set before diving into instructions. I would prefer instructions of this size be spiral bound in general, though I did not have any issues keeping the book open to the proper page. I didn’t have an problem with pages falling out, either, like I have with previous large instruction manuals bound this way. 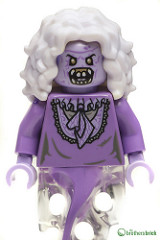 I am very impressed with this set. The build, though time consuming, has been a wonderful experience. There are plenty of excellent techniques. I feel less like I’m building a set and more like I’m creating a build of my own. Each wall is two studs wide, allowing for detailed outside colors and completely different interior. In addition to the new hair pieces for the minifigures, there are a number of new parts in this set, including:

This set does include stickers. This includes the mirrored silver stickers, which LEGO has always made as stickers. Some were things that should have been printed, including the Ghostbusters iconic logo. This was a sticker placed on a 2×2 white tile and 2×2 inverted white tile. Other 2×2 tiles, including a magazine cover, were printed. I don’t understand why the decision was made to not print the Ghostbusters logo. In the Ecto-1 set, even the curved 2×2 slopes were printed. 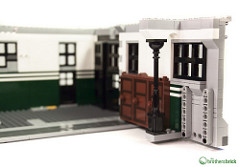 >The first four bags groups are dedicated to building the first floor, which is quiet impressive. The desks, toolbox, lamp, and boxes make their appearance. The windows are all recessed by half a stud, which looks excellent and adds to the overall visual accuracy. The interior uses dark green as its main color, and has the shelving across the entire back wall. The main doors are brick built, with the black doorframe coming to the party late in bag group 3. Being brick built adds an extra level of detail.

One detail I particularly like is the pink slime leaking out on the sidewalk. I remember the pink slime vividly from the movies when I was a kid and appreciated seeing it incorporated into the build.

This set features the pre-molded staircase that is very familiar to the Castle and City themes. The set uses 1×2 inverted brown slopes to smooth out the visible edge, which I hadn’t seen used in a set previously.

The second floor has some interesting details; the sink, for example, uses the studs sideways and does not connect to the rest of the model using a stud connection. For stability, one of the corners uses a telescope piece that’s completely hidden. 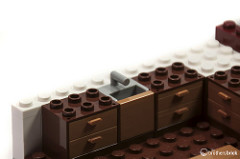 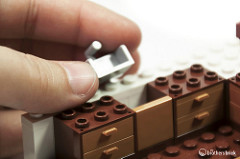 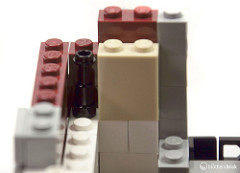 The kitchen is very detailed, with a fantastic fridge and arcade machine. The sink u 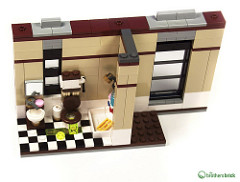 ses the new double corner panel, and isn’t attached by studs at all, and is quite effective. There are plenty of healthy options including pizza and a soda in a red can. The second floor bathroom is awfully messy and I suspect Slimer is at work. The shower and toilet are clever and detailed. I don’t like the fact that there is no wall between the beds and toilet, however. I understand that it’s a space issue in the model and when the firehouse is open, it doesn’t make a difference. But after the rest of attention to detail in the model, this just stuck out.

The third floor features shelving with instruments, a computer, a coffee table, and a pool table. The pool table is rather clever and full of excellent techniques, including a studs-not-on-top design. The coffee table securely attaches to the floor diagonally using jumper plates. The fireman’s pole is attached to the third and first floors, and is added as one of the final steps. 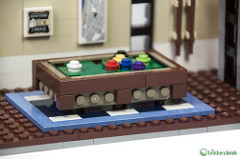 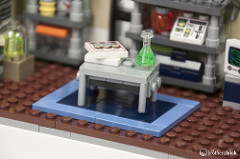 The roof is designed to open on the side, just the same as the rest of the building, and is solidly attached to the model. Each portion that opens seals with a clip and rod, and helps make the set very solid when moved, preventing the sides from swinging open (which they did during building, every time I had to move it). 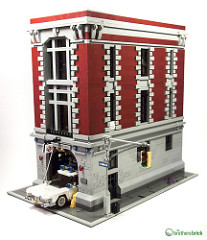 Overall, this set is fantastic. It’s full of great details the sort of that adult fans would put into their own creations. It has interesting techniques for minifig-scale items, and just feels complete. I appreciate that with the immense size of this set, very little felt repetitive during the build process, even with the tile/modified bricks with studs on the side design for the windows. I appreciate the continuity with the Ecto-1 fitting perfectly inside.

It was, understandably, a very long build. We’re talking a full marathon of Lord of the Rings, Extended Edition build length. If you choose to build this (and I hope you do), be prepared for the long haul and make sure you’ve got good lighting and a decent chair. You’ll find the result well worth your time. 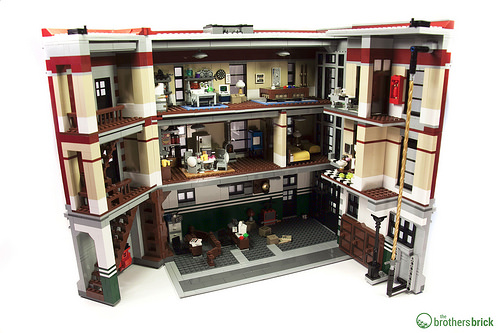 You can check out all of our pictures on flickr.

Here at The Brothers Brick, we recognize there’s been a lot of conversation in the LEGO community regarding this set and a similar submission on IDEAS. We reviewed this as a set and won’t be making further comments regarding this topic.