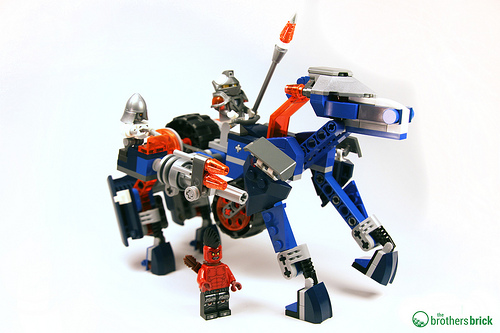 This set was every bit glorious and weird as I hoped it would be. I’m reminded strongly of Ice Planet with the trans-neon orange and blue highlights, with a tiny sprinkling of Castle.

First thing’s first: this line has a number of new parts to oogle over:

When you open the box, there are two bags without numbers and two instruction books. The first book takes you up through about half of the mecha horse. The printing for the characters is fantastic, and minifigs have printing on the back, as we’ve seen before. Lance has a new shoulder armor piece that shows the crest on his chest, along with a new visor for his helmet.

I like the set. It’s a tad bizarre and I like it. The horse head is well shaped and implies it being a horse without being out of place on a transforming motorcycle horse. The model feels very unfinished until the very end, which was an odd building experience. Typically a set will take shape over the course of the build; this did not. 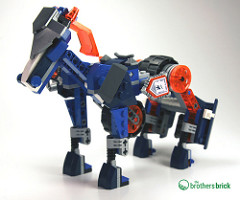 I am pretty impressed with the transforming mechanism. The mecha horse looks decent enough; the motorcycle looks decent, and the build seamlessly goes from one to the other. Bend the horse’s lower back straight up, and bring the head back while flipping the legs over, and voila-you have a motorcycle.

The horse features an area for Lance to sit, and a side-car gun turret for Lance-bot. 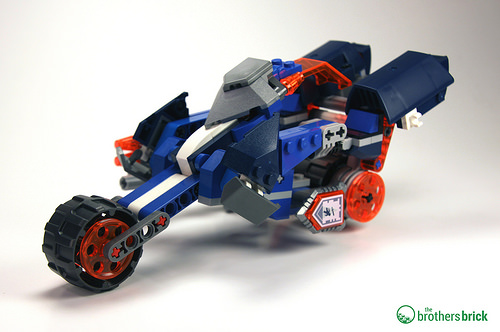 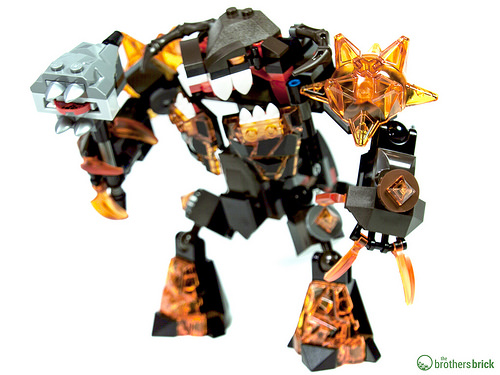 I enjoyed this set more than Lance’s Mecha Horse. I enjoyed the build more and I am happier with the final product. Infernox is a grumpy-looking creature that reminds me of the rock monsters. I find him to be a solid build. I like the color scheme with the black, brown, and trans-orange.

When opening the box, there are two numbered bags and a sticker sheet. There is one instruction book. Like the previous set, minifigs have torsos with printing front and back. Aaron has a new helmet and visor.

There are flaws with the model. The joints don’t have a lot of friction, so in posing him, if I any applied pressure on the head, the hips and knees would buckle. Additionally, the back feels unfinished. The front of the model is polished and engaging but the back has exposed studs that show some of the internal structure. 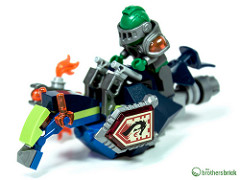 As for Aaron’s little horse speeder, it’s a pretty clever little build. It uses one of the motorcycle parts backwards, and the horse head sculpting is effective. The shooter gun comes with a fantastic little neon orange piece that’s made up of a ball and rod.

This set also comes with the new shield tile in trans-orange with printing, and one in black. In the set, this gets stickered. I opted not to apply the stickers. There are trans-orange 1×1 pyramids.

Overall, both of these are solid sets and I recommend picking up both. They provide excellent new parts, and existing parts in great colors. 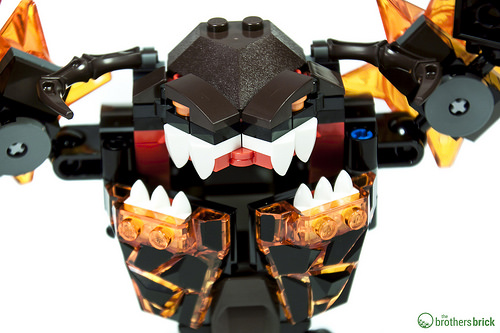 If you haven’t done so, I highly recommend reading Elspeth’s post highlighting some of the design process and prototypes that Mark Stafford had on hand at BRICK 2015!