The Grumman F-14 Tomcat was a big beast of a fighter, similar in size and weight to many WW2 bombers, but it could also carry a big punch in the form of four long-range air-to-air Phoenix missiles nestled under the fuselage and a Sidewinder and Sparrow missile under each of the wings. The jet and its armament were faithfully reproduced by Péter Dornbach (Dornbi). Like the real aircraft, his 1/48 scale model also has a working variable geometry ‘swing wing’. 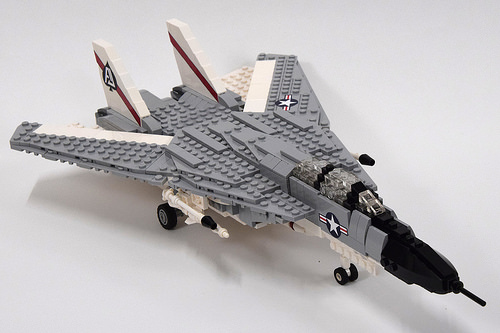 It may be an old warrior by now, with the last examples in US Navy service having been retired almost ten years ago, but it’s still one of the coolest jet fighters in my book, certainly in the high-visibility colour schemes typical for the Seventies. Péter’s model is resplendent in the markings of Fighter Squadron 41 “The Black Aces”, aboard USS Nimitz in 1978. Excellent choice!