To round off our exploration of the rich LEGO repertoire of Letranger Absurde, here is a charming representation of Victorian dandy Algernon Moncrieff, from Oscar Wilde’s farcical play The Importance of Being Earnest. With larger character builds, it’s less common for builders to take the trouble to construct an entire scene, but this one comes fully furnished for the period (the Vermeer painting is an especially nice touch), while the casual posing and puff of brick-built smoke breathe life into the whole thing. 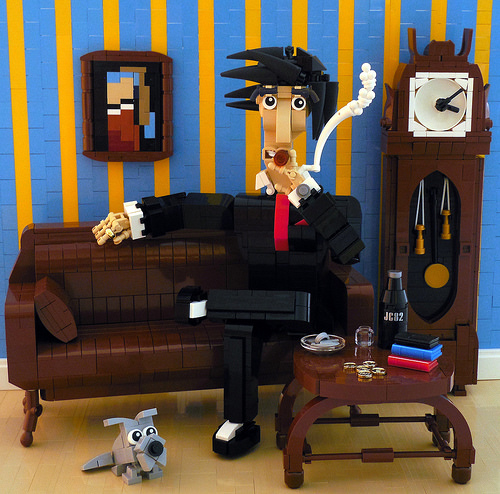 From the builder: “I’m quite fond of this one. Leaving aside the fact that it’s an update to my very first character build and based on the very first play I’ve ever read and fell in love with, I feel that I’ve accomplished some things here: making a detailed scene for my large scale figs that doesn’t feel like a cheap prop and managing a pretty natural pose (most of my previous chars just felt too wooden). I’ve also experimented a bit with photography; despite the loss in clarity and quality, I think the natural low light makes the scene feel more natural.”