Over the years several people have constructed mechanisms to get coaxial rotors on their helicopters to spin in opposite directions, including Henry Oberholtzer. Recently one of his ingenious creations was successfully adopted by Matt Hacker for his AH-5 “Chogenbo” (Japanese for Kestrel). The end result is one of the coolest and most believable near-future helicopters that I have seen in a long time. Matt unveiled the model at Brickfair Virginia in August, where it won the ‘Best Military’ category. I have been eagerly anticipating him posting pictures of it ever since. 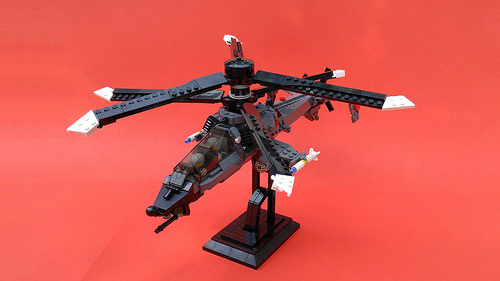 Let me apologise for the info dump in advance, but there is no denying that I am a bit of an aviation geek. (It’s fewer than 4000 words, I promise.) Coaxial helicopters are cool. There is a fundamental limit, of about 400 km/h, to the forward speed of conventional helicopters. This is essentially set by the blades being swept forward reaching the speed of sound -this is a bad thing- and the blades being swept aft, also known as the retreating blades, moving too slow through the air to generate lift. This is called a retreating blade stall and is also a bad thing. That going faster is difficult is evidenced by the longevity of the current record, set by a modified Westland Lynx as long ago as 1986. If you want your helicopter to go faster, you’ll have to get creative. However, coaxial helicopters, with two sets of counter-rotating rotors on top of each other, do offer the promise of considerably faster flight. The retreating blades on a coaxial helicopter do suffer from retreating blade stall, but the resulting loss of lift is compensated by the lift generated by the blades of the other set on the same side of the helicopter moving forward. To see the coaxial rotors on Matt’s helicopter in action, check out his video.

2 comments on “The Chogenbo is coaxial coolness”