is the fourth book by British builder Warren Elsmore, who, together with his wife Kitty, is also the driving force behind the Afolcon/ Brick LEGO events due to take place later this year in Birmingham and London.

This is a substantial book, with 258 pages. It is crisply printed on sturdy semi-glossy paper and it has a flexible cover. It looks and feels like a quality product, which, given the low price point of just £12.99 in the UK, is pleasantly surprising. The US edition, called Brick Vehicles, costs only $13.

The book consists of five chapters. The introductory chapter covers such topics as names for parts, where to buy LEGO, on-line resources and sorting. This is probably mainly useful for builders who are just discovering that there are more people like them out there or as a guide for parents whose children are getting into building. The other four chapters deal with, respectively, road vehicles, trains, ships and flying vehicles. This is where things get more interesting, with pictures of inspirational models built by Warren himself and by friends of his, including about a dozen by yours truly, interspersed with pages of instructions for mostly smaller models that readers can build themselves. 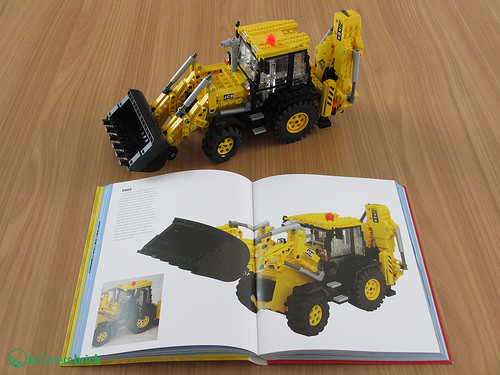 The inspirational models are nicely photographed and a pleasure to look at. The models readers can build themselves are a bit of a mixed bag, however. They look nice enough, although some are so simple one wonders why instructions are necessary. Several other models are a bit more elaborate and I had a go at building two of these myself to find out what they are like. 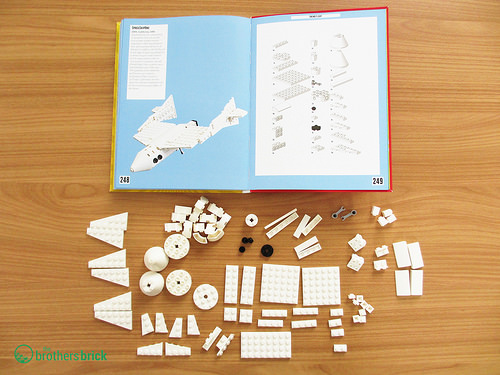 I built a minifig-scale airboat and a rather nifty little model of Scaled Composites’ SpaceShipOne. These are fun builds and children will definitely enjoy building and playing with the models, provided they don’t get frustrated finding the parts. The instructions all have very helpful parts lists, but I struggled to find all the parts required for them in my own collection. Some of the models in the book use a mixture of current elements and sometimes somewhat rarer old parts or large numbers of a single type of part -56 1×1 trans light blue plates in one- that will tax almost any collection. I am not so sure that the effort to find or acquire all of these parts will be worth end results that are not all that spectacular. SpaceShipOne uses a cone 4x4x3 with one solid stud, for instance, which I only happen to have because my sister had the homemaker hospital as a child. This makes the part about 35 years old, which is definitely a testament to LEGO’s durability, but may also mean that few people will have one. The most complicated instructions are for models of a rather nice Claas tractor, a Formula One racer (by Peter Blackert) and my own minifig scale Routemaster Bus. I think that plenty of adult fans wouldn’t mind having these models on their LEGO shelves, but this will take serious dedication. Of course, even if the readers can’t build the models, the instructions do provide a view of some of the techniques used by adult LEGO builders, which may inspire people’s own creations.

Brick Wheels is a lot of book for your money, with some really nice models. I think it will work as a source of inspiration for adults and children who want to build their own models. It also has instructions for fairly simple models that children in particular will enjoy building. However, the more elaborate models require parts that one is not likely to find in the average LEGO collection, and trying to build these from the instructions may end in frustration.